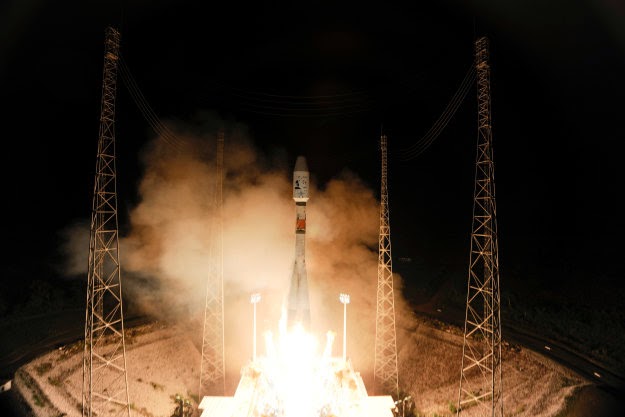 Gaia has been travelling towards L2 since 19 December, when, just before dawn local time, it was spectacularly launched from ESA's Spaceport in Kourou, French Guiana.

A day later, Gaia performed an important thruster burn to set course to its destination. Last night, a critical manoeuvre boosted into its 263 000 × 707 000 × 370 000 km, 180 day-long orbit around L2. A small course correction will be made next week to complete the manoeuvre.

"Entering orbit around L2 is a rather complex endeavour, achieved by firing Gaia's thrusters in such a way as to push the spacecraft in the desired direction whilst keeping the Sun away from the delicate science instruments," describes David Milligan, Gaia spacecraft operations manager.

"After a beautiful launch from Kourou last month, we are very happy to now have reached our destination, and we are looking forward to starting our science operations in the coming months," says Giuseppe Sarri, ESA's Gaia project manager.

Once the spacecraft instruments have been fully tested and calibrated – an activity that started en route to L2 and will continue for another four months – Gaia will be ready to enter a five-year operational phase.

Gaia will make very accurate observations of one billion stars, charting their precise positions and motions, as well as their temperatures, luminosities and compositions.

This enormous census will result in the most accurate 3D map yet of the Milky Way and allow astronomers to determine the origin and the evolution of our galaxy.

To achieve its goal, Gaia will spin slowly, sweeping its two telescopes across the entire sky and focusing their light simultaneously onto a single digital camera – the largest ever flown in space with nearly a billion pixels.

Gaia will observe each star an average of 70 times over the five-year mission, after which the data archive will exceed one million Gigabytes, equivalent to about 200 000 DVDs' worth of data.

The task of processing and analysing this colossal treasure trove of data will fall to the Gaia Data Processing and Analysis Consortium, comprising more than 400 individuals at scientific institutes across Europe.

"Our Gaia discovery machine will keep us busy throughout the mission, with the final results coming only after the five years of data have been analysed. But it will be well worth the wait, ultimately giving us a new view of our cosmic neighbourhood and its history," says Timo Prusti, ESA's Gaia project scientist.

Watch a replay of the Gaia launch: http://spaceinvideos.esa.int/Videos/2013/12/Gaia_launch_replay_highlights