Witnessing the early growth of a giant 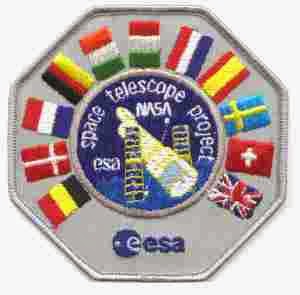 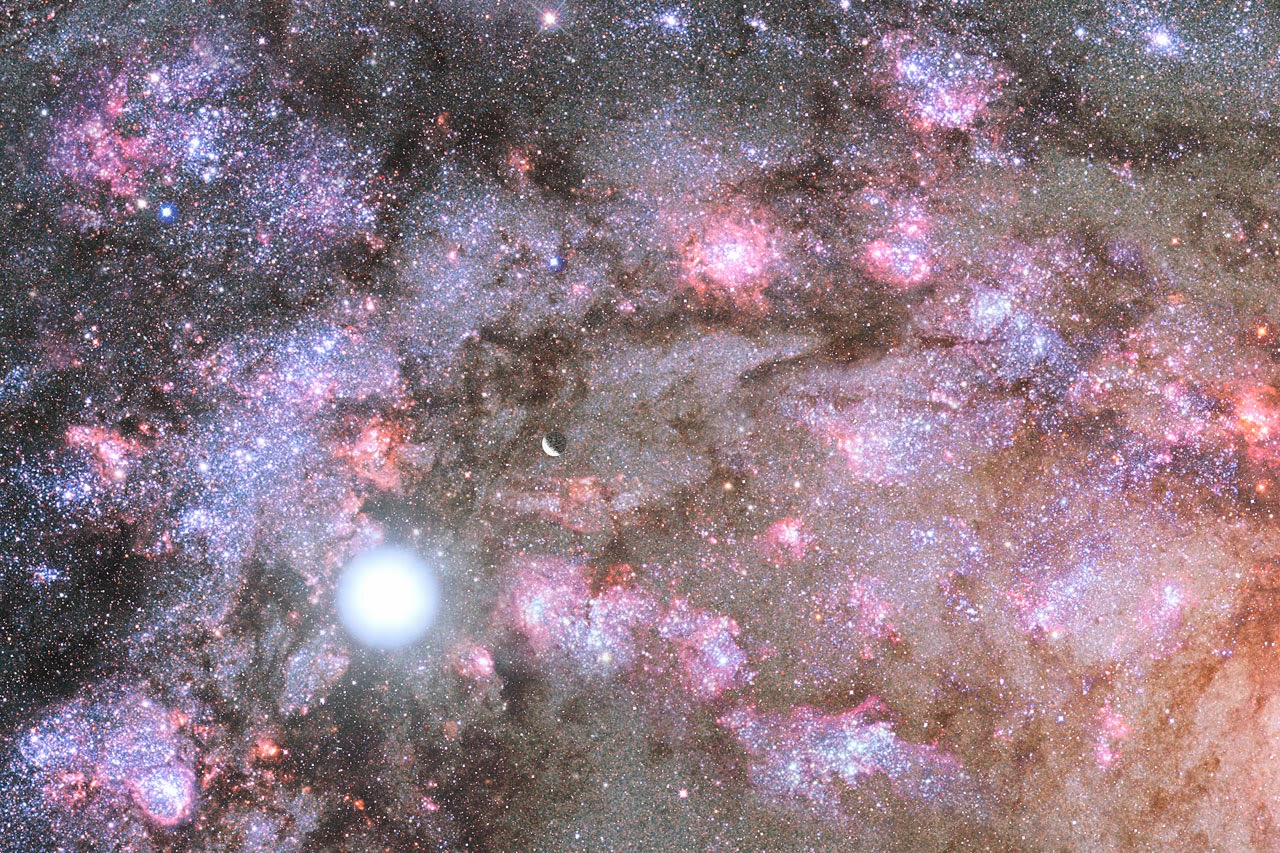 Astronomers have uncovered for the first time the earliest stages of a massive galaxy forming in the young Universe. The discovery was made possible through combining observations from the NASA/ESA Hubble Space Telescope, NASA's Spitzer Space Telescope, ESA's Herschel Space Observatory, and the W.M. Keck Observatory in Hawaii. The growing galaxy core is blazing with the light of millions of newborn stars that are forming at a ferocious rate. The paper appears in the journal Nature on 27 August.

Elliptical galaxies are large, gas-poor gatherings of older stars and are one of the main types of galaxy along with their spiral and lenticular relatives. Galaxy formation theories suggest that giant elliptical galaxies form from the inside out, with a large core marking the very first stages of formation.

However, evidence of this early construction phase has eluded astronomers — until now. 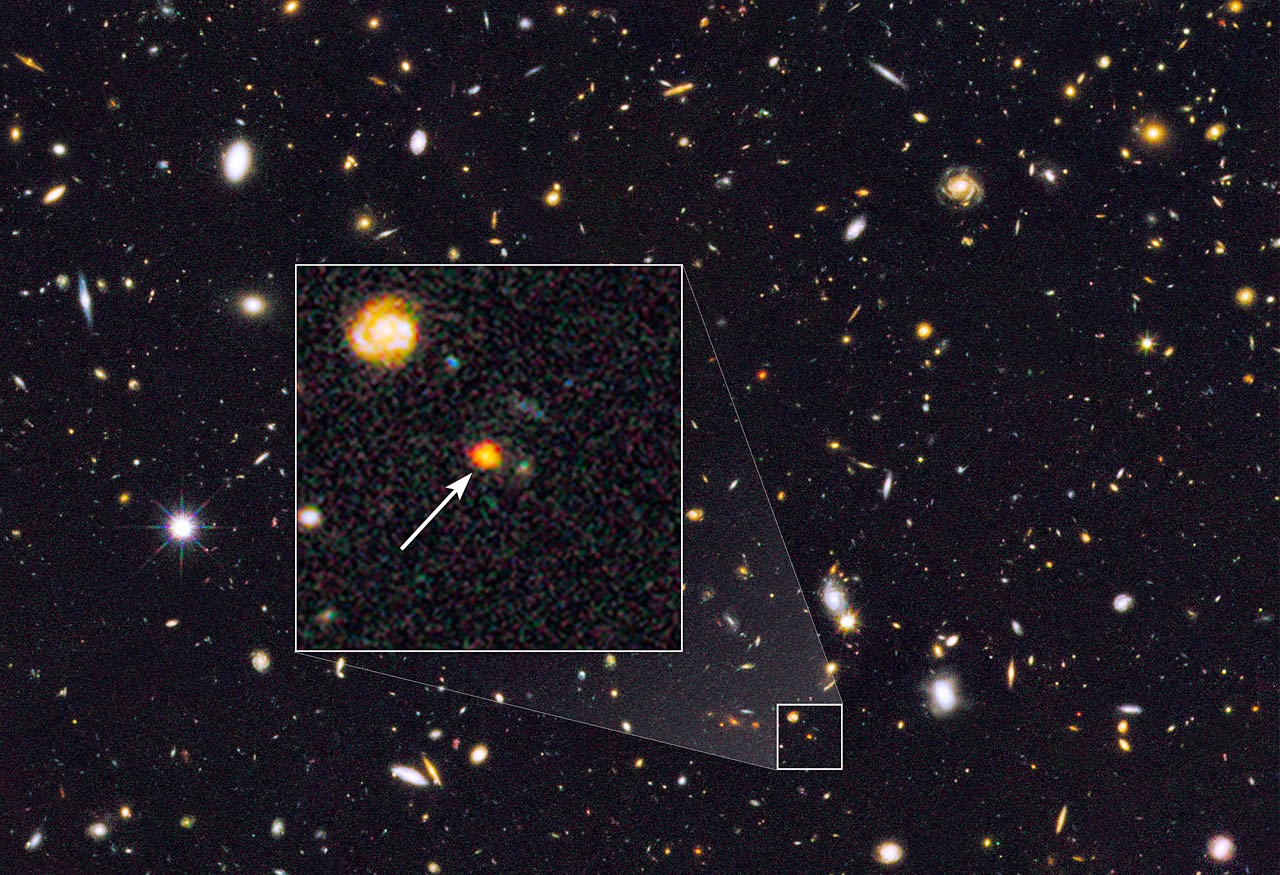 Astronomers have now spotted a compact galactic core known as GOODS-N-774, and nicknamed Sparky [1]. It is seen as it appeared eleven billion years ago, just three billion years after the Big Bang.

"This core formation process is a phenomenon unique to the early Universe," explains Erica Nelson of Yale University, USA, lead author of the science paper announcing the results, "we do not see galaxies forming in this way any more. There's something about the Universe at that time that could form galaxies in this way that it now can't. We suspect that the Universe could produce denser objects because the Universe as a whole was denser shortly after the Big Bang. It is much less dense now, so it can't do it anymore." 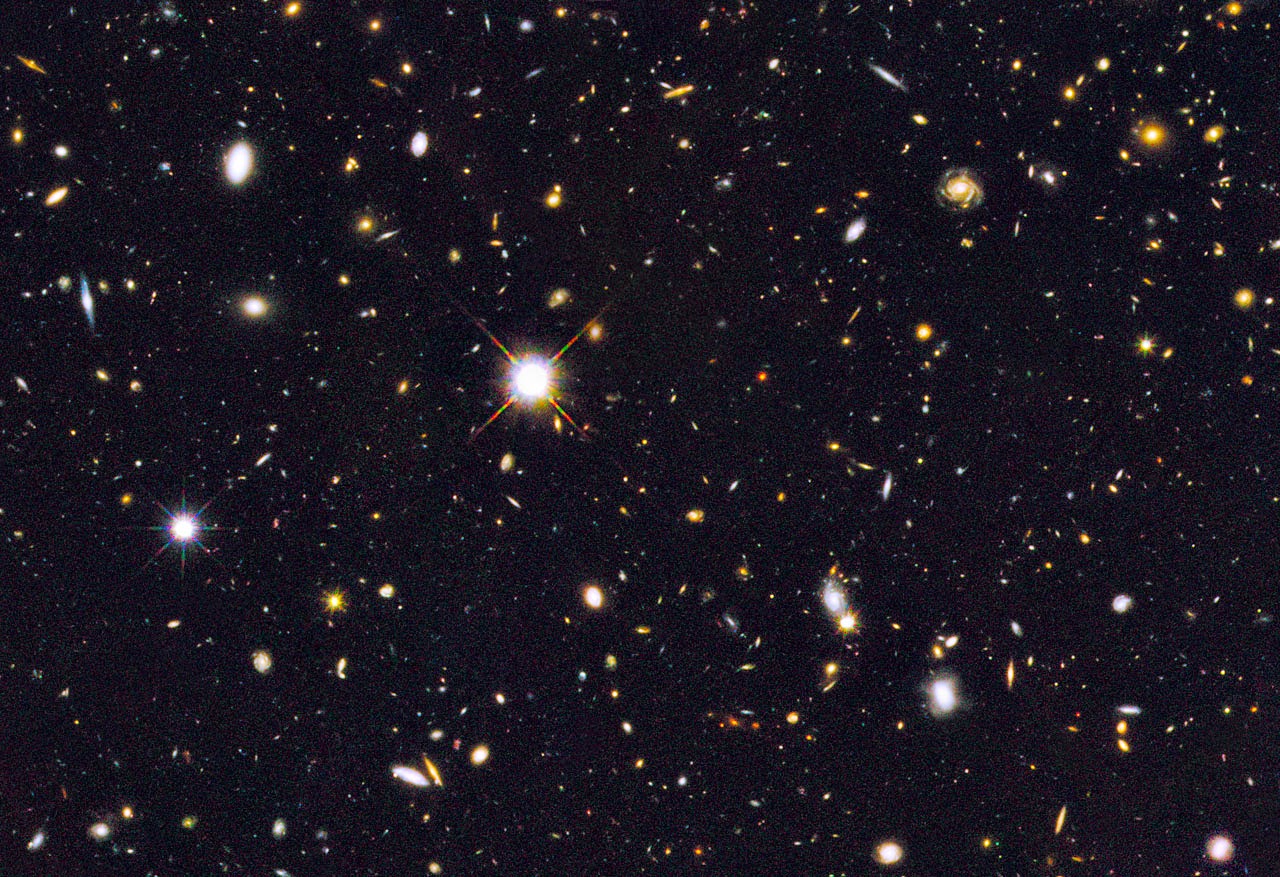 Although only a fraction of the size of the Milky Way, the infant galaxy is crammed with so many young stars that it already contains twice as much mass as our entire galaxy. It is thought that the fledgling galaxy will continue to grow, eventually becoming a giant elliptical galaxy. The astronomers think that this barely visible galaxy may be representative of a much larger population of similar objects that are too faint or obscured by dust to be spotted — just like the Sun can appear red and faint behind the smoke of a forest fire.

Alongside determining the galaxy's size from the Hubble images, the team dug into archival far-infrared images from NASA's Spitzer Space Telescope and the ESA Herschel Space Observatory to see how fast the compact galaxy is churning out stars. GOODS-N-774 is producing 300 stars per year. "By comparison, the Milky Way produces thirty times fewer than this — roughly ten stars per year," [2] says Marijn Franx of Leiden University in the Netherlands, a co-author of the study. "This star-forming rate is really intense!" 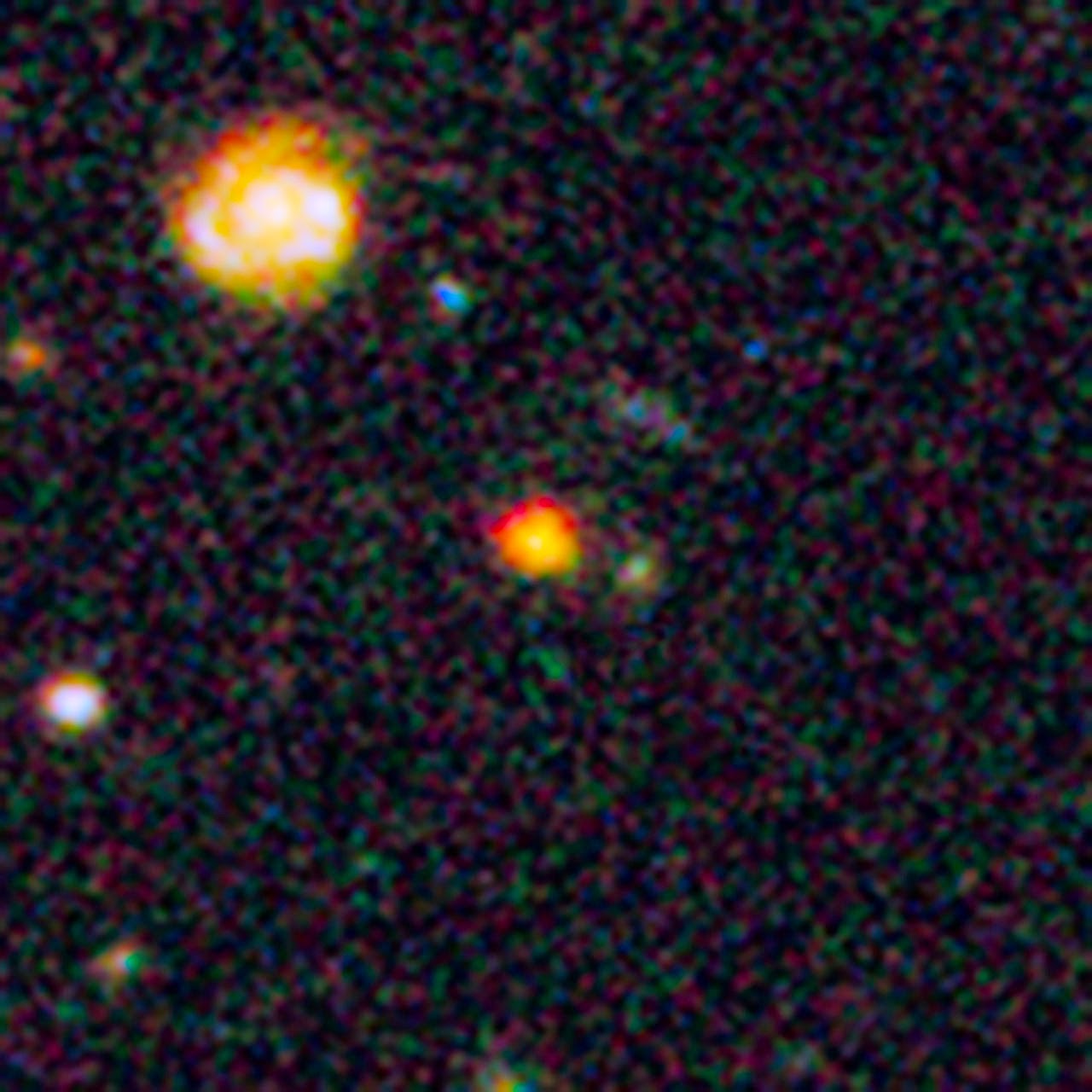 Astronomers believe that this frenzied star formation occurs because the galactic centre is forming deep inside a gravitational well of dark matter, an invisible form of matter that makes up the scaffolding upon which galaxies formed in the early Universe. A torrent of gas is flowing into the well and into the compact galaxy, sparking waves of star birth. 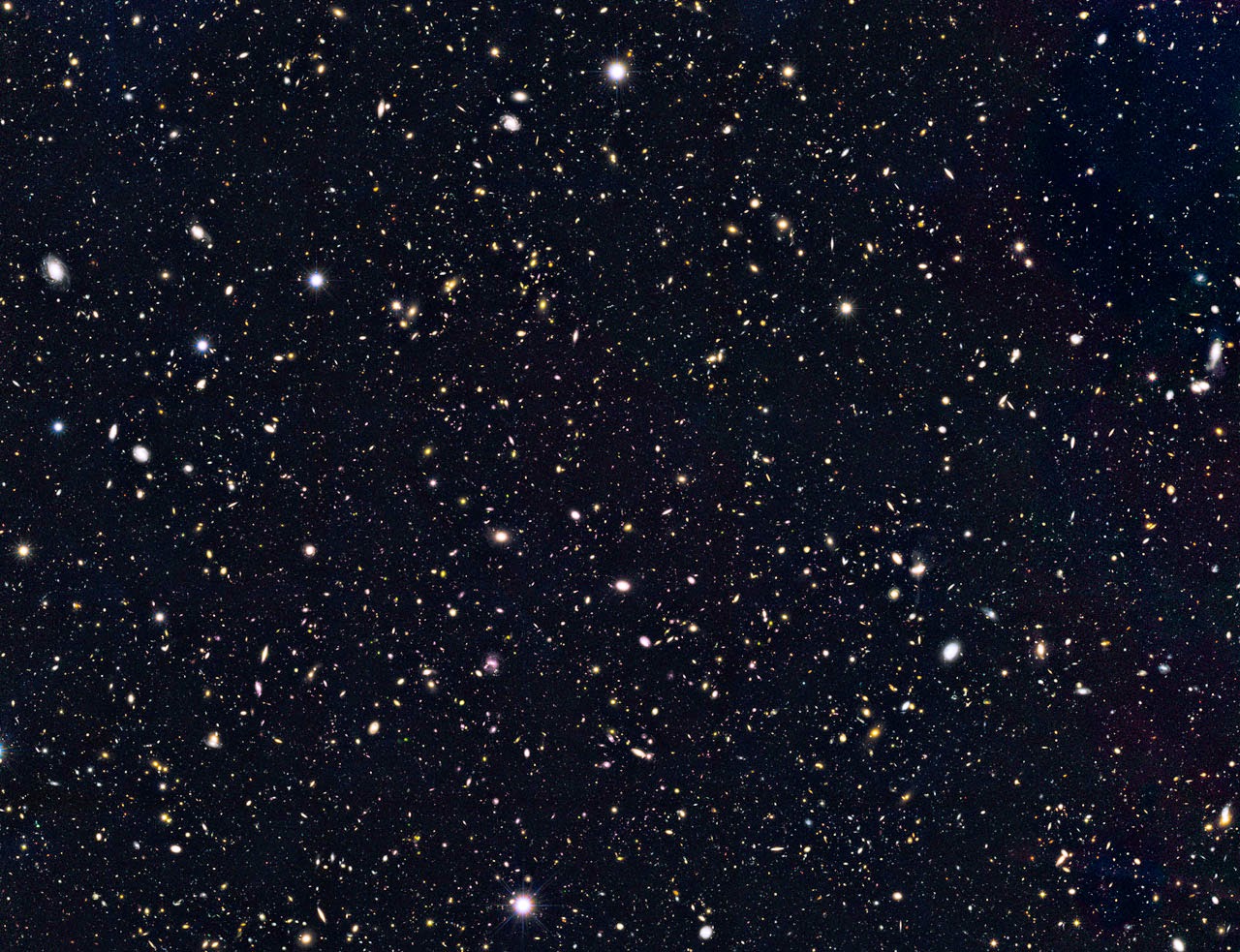 "They're very extreme environments," said Nelson. "It's like a medieval cauldron forging stars. There's a lot of turbulence, and it's bubbling. If you were in there, the night sky would be bright with young stars, and there would be a lot of dust, gas, and remnants of exploding stars. To actually see this happening is fascinating."

The sheer amount of gas and dust within an extreme star-forming region like this may explain why they have eluded astronomers until now. Bursts of star formation create dust, which builds up within the forming core and can block some starlight [3] — GOODS-N-774 was only just visible, even using the resolution and infrared capabilities of Hubble's Wide Field Camera 3.

"This galaxy seems to have been furiously forming stars for more than a billion years," adds Franx. "We have spotted it very early on in its life. Shortly after the time period we're looking at, we think that this core will have stopped forming stars, and that smaller galaxies will have merged with it over the next 10 billion years until it expanded and grew outwards in size. It would resemble one of the mammoth, sedate ellipticals we see today."

"We had been searching for this galaxy for years, and it's very exciting that we finally found it", says Dokkum, "The big challenge is to understand the physics driving the formation of such objects. The James Webb Space Telescope, Hubble's successor, will be able to help us find an answer."

[1] The astronomers found the galaxy while poring over WFC3 images of thousands of galaxies catalogued in two large Hubble surveys of the distant Universe: 3D-HST and the Cosmic Assembly Near-infrared Deep Extragalactic Legacy Survey (CANDELS). They then used instruments at the W.M. Keck Observatory to measure the galaxy's distance from Earth, and to detect how fast the gas was moving, which confirmed its massive structure.

[2] Not all stars are the same mass as our Sun. The approximately 10 stars per year formed in the Milky Way will generally be less massive than our Sun.

[3] The dust build up in the compact galaxy obscures and reddens ultraviolet light from infant stars. The dust is absorbing and re-radiating that light as infrared light.