Video above: A solar flare erupted on the right side of the sun on Oct. 2, 2014, while a cloud of solar material just below was flung out into space. Video Credit: NASA/SDO/ Wiessinger.

The sun emitted a mid-level solar flare, peaking at 3:01 p.m. EDT on Oct. 2, 2014.  NASA's Solar Dynamics Observatory, which watches the sun 24-hours a day, captured images of the flare. Solar flares are powerful bursts of radiation. Harmful radiation from a flare cannot pass through Earth's atmosphere to physically affect humans on the ground, however -- when intense enough -- they can disturb the atmosphere in the layer where GPS and communications signals travel. 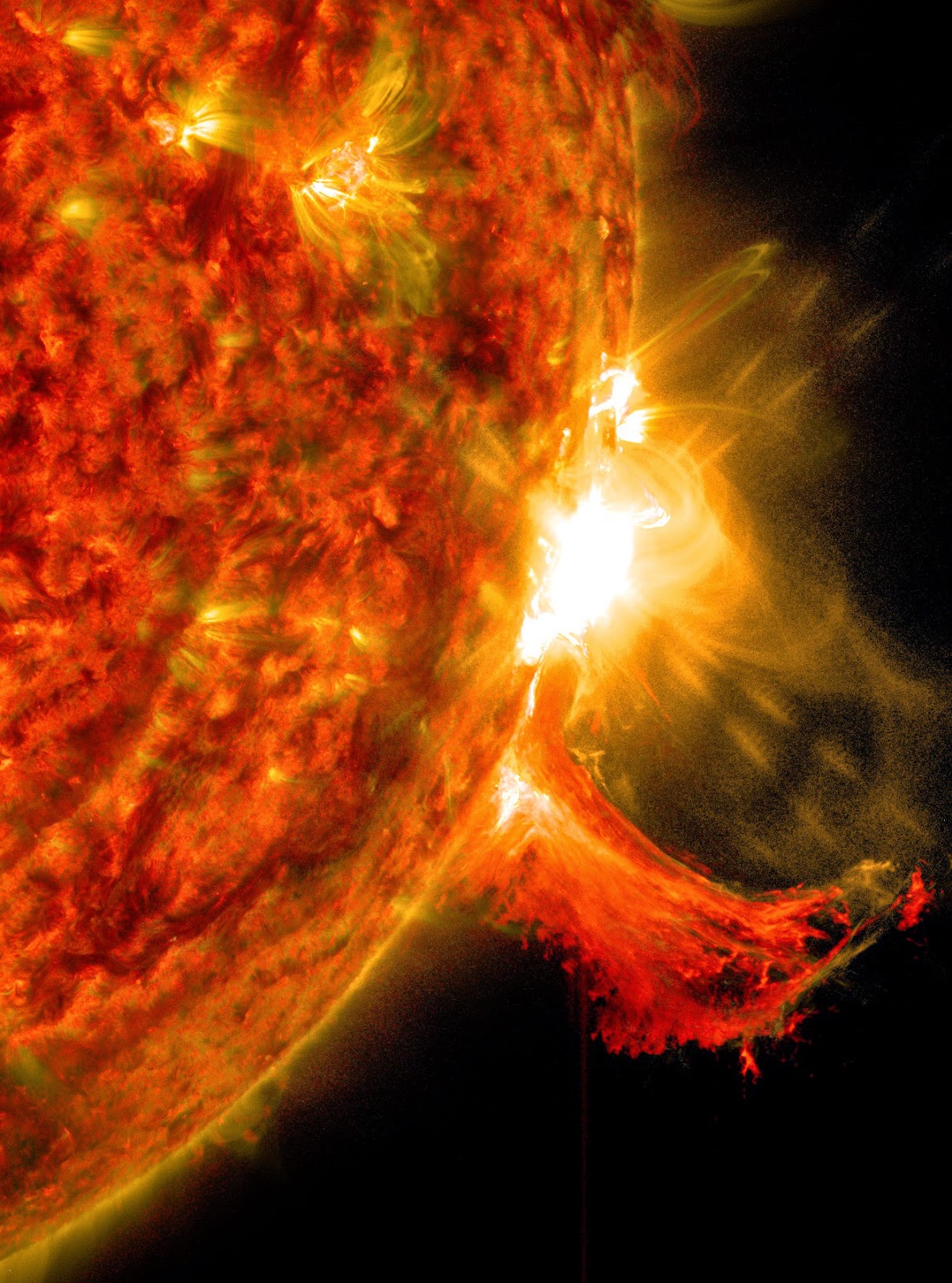 Image above: NASA's Solar Dynamics Observatory captured this image of a solar flare on Oct. 2, 2014. The solar flare is the bright flash of light on the right limb of the sun. A burst of solar material erupting out into space can be seen just below it. Image Credit: NASA/SDO.

This flare is classified as an M7.3 flare. M-class flares are one-tenth as powerful as the most powerful flares, which are designated X-class flares.

Updates will be provided as needed.

What is a solar flare?
For answers to this and other space weather questions, please visit the Spaceweather Frequently Asked Questions page: http://www.nasa.gov/mission_pages/sunearth/spaceweather/index.html

A snaking, extended filament of solar material currently lies on the front of the sun-- some 1 million miles across from end to end. Filaments are clouds of solar material suspended above the sun by powerful magnetic forces. Though notoriously unstable, filaments can last for days or even weeks.

Images above: A dark snaking line in the upper right of these images on Sept. 30, 2014, show a filament of solar material hovering above the sun's surface. NASA's SDO captured the images in extreme UV light – different colors represent different wavelengths of light and different temperatures of solar material. Image Credit: NASA/SDO.

NASA's Solar Dynamics Observatory, or SDO, which watches the sun 24 hours a day, has observed this gigantic filament for several days as it rotated around with the sun. If straightened out, the filament would reach almost across the whole sun, about 1 million miles or 100 times the size of Earth.

SDO captured images of the filament in numerous wavelengths, each of which helps highlight material of different temperatures on the sun. By looking at any solar feature in different wavelengths and temperatures, scientists can learn more about what causes such structures, as well as what catalyzes their occasional giant eruptions out into space.