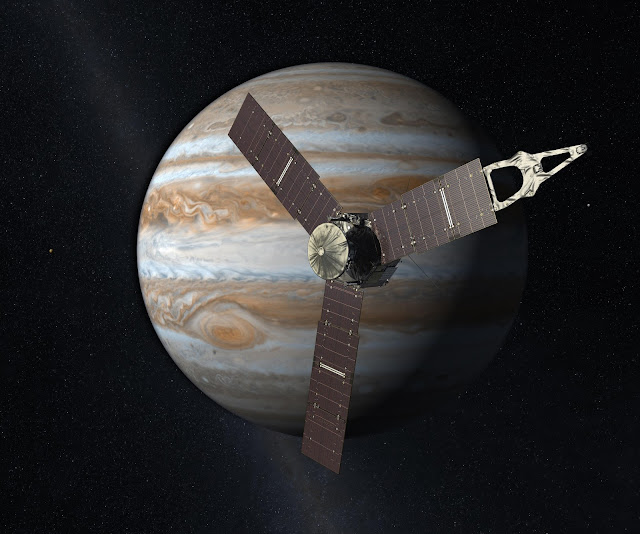 Image above: Launching from Earth in 2011, the Juno spacecraft will arrive at Jupiter in 2016 to study the giant planet from an elliptical, polar orbit. Juno will repeatedly dive between the planet and its intense belts of charged particle radiation, coming only 5,000 kilometers (about 3,000 miles) from the cloud tops at closest approach. Image Credits: NASA/JPL-Caltech.

"This is the first of two trajectory adjustments that fine tune Juno’s orbit around the sun, perfecting our rendezvous with Jupiter on July 4th at 8:18 p.m. PDT [11:18 p.m. EDT]," said Scott Bolton, Juno principal investigator at the Southwest Research Institute in San Antonio.

The maneuver began at 10:38 a.m. PST (1:38 p.m. EST). The Juno spacecraft's thrusters fired for 35 minutes, consumed about 1.2 pounds (.56 kilograms) of fuel, and changed the spacecraft's speed by 1 foot (0.31 meters), per second. At the time of the maneuver, Juno was about 51 million miles (82 million kilometers) from Jupiter and approximately 425 million miles (684 million kilometers) from Earth. The next trajectory correction maneuver is scheduled for May 31. 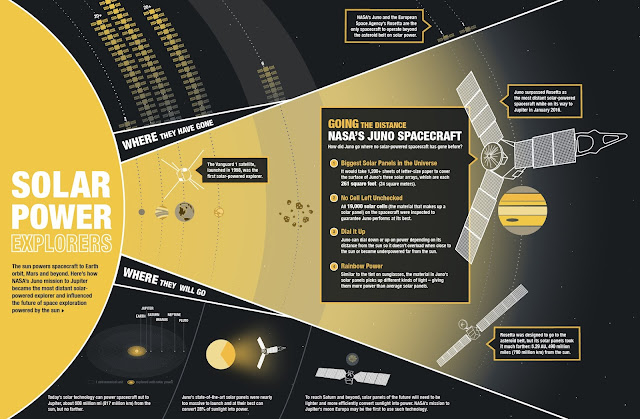 Graphic above: This graphic shows how NASA’s Juno mission to Jupiter became the most distant solar-powered explorer and influenced the future of space exploration powered by the sun. Graphic Credits: NASA/JPL-Caltech.

Juno was launched on Aug. 5, 2011. The spacecraft will orbit the Jovian world 33 times, skimming to within 3,100 miles (5,000 kilometers) above the planet's cloud tops every 14 days. During the flybys, Juno will probe beneath the obscuring cloud cover of Jupiter and study its aurorae to learn more about the planet's origins, structure, atmosphere and magnetosphere.

Juno's name comes from Greek and Roman mythology. The god Jupiter drew a veil of clouds around himself to hide his mischief, and his wife -- the goddess Juno -- was able to peer through the clouds and reveal Jupiter's true nature.

For more information about Juno visit these sites: