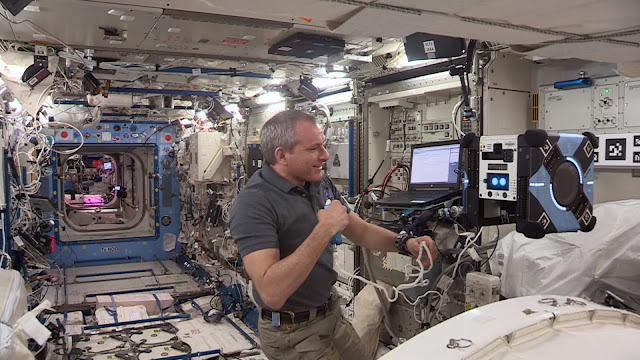 On June 14, a robot named Bumble became the first Astrobee robot to fly under its own power in space. Astrobee is a free-flying robot system that will help researchers test new technologies in zero gravity and perform routine work alongside astronauts aboard the International Space Station. Robots that can operate on their own in space, such as Astrobee, can be caretakers for NASA's lunar gateway and will play a significant part in NASA’s future missions to explore the Moon and Mars.

Before Bumble’s first solo flight, the Astrobee team at NASA’s Ames Research Center in Silicon Valley verified that Bumble can find its position and was ready to navigate within the space station. Canadian Space Agency astronaut David Saint-Jacques provided hands-on help for the pre-flight tests, manually moving Bumble around the Kibo laboratory to allow Astrobee’s navigation system to calibrate to its new surroundings. The navigation system uses a camera to observe the robot’s surroundings and compares what the camera sees to a map of the space station’s interior.

Astrobee robots can move in any direction and turn on any axis in space. Bumble’s first flights tested basic motions, such as "fly 11.8 inches forward" or "rotate 45 degrees to the right." NASA will continue to test Bumble's movement capability through a series of increasingly complex maneuvers to determine how well the robot performs in zero gravity. Results from these tests will be used to tune Astrobee’s propulsion system and help Bumble get ready to assume its role as the newest crewmember on the space station.

Bumble and a second Astrobee, “Honey,” launched to the space station in April. A third robot named “Queen” is scheduled to launch in July.