ESA’s Herschel space observatory has discovered a population of dust-enshrouded galaxies that do not need as much dark matter as previously thought to collect gas and burst into star formation.

The galaxies are far away and each boasts some 300 billion times the mass of the Sun. The size challenges current theory that predicts a galaxy has to be more than ten times larger, 5000 billion solar masses, to be able form large numbers of stars.

The calculated distribution of dark matter
The new result is published today in a paper by Alexandre Amblard, University of California, Irvine, and colleagues.

Most of the mass of any galaxy is expected to be dark matter, a hypothetical substance that has yet to be detected but which astronomers believe must exist to provide sufficient gravity to prevent galaxies ripping themselves apart as they rotate.

Current models of the birth of galaxies start with the accumulation of large amounts of dark matter. Its gravitational attraction drags in ordinary atoms. If enough atoms accumulate, a ‘starburst’ is ignited, in which stars form at rates 100–1000 times faster than in our own galaxy does today. 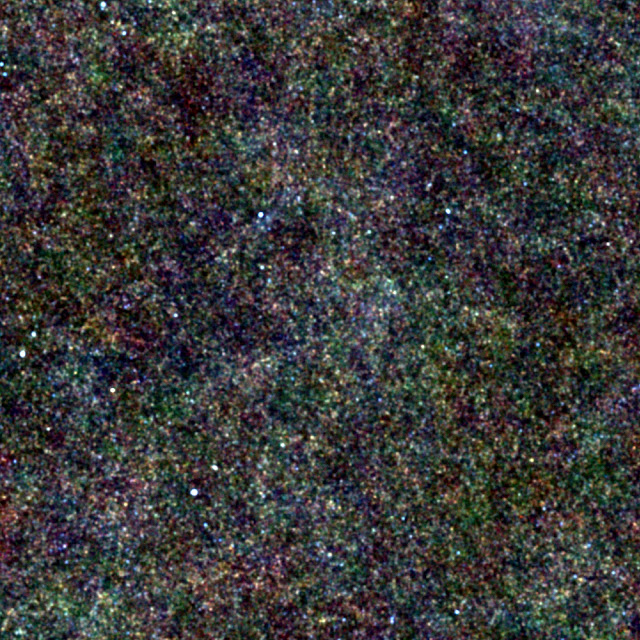 Herschel's target: the so-called Lockman Hole
“Herschel is showing us that we don’t need quite so much dark matter as we thought to trigger a starburst,” says Asantha Cooray, University of California, Irvine, a co-author on today’s paper.

This discovery was made by analysing infrared images taken by Herschel’s SPIRE (Spectral and Photometric Imaging Receiver) instrument at wavelengths of 250, 350, and 500 microns. These are roughly 1000 times longer than the wavelengths visible to the human eye and reveal galaxies that are deeply enshrouded in dust.

“With its very high sensitivity to the far-infrared light emitted by these young, enshrouded starburst galaxies, Herschel allows us to peer deep into the Universe and to understand how galaxies form and evolve,” says Göran Pilbratt, the ESA Herschel project scientist.

There are so many galaxies in Herschel’s images that they overlap, creating a fog of infrared radiation known as the cosmic infrared background. The galaxies are not distributed randomly but follow the underlying pattern of dark matter in the Universe, and so the fog has a distinctive pattern of light and dark patches.

The calculated distribution of dark matter
Analysis of the brightness of the patches in the SPIRE images has shown that the star-formation rate in the distant infrared galaxies is 3–5 times higher than previously inferred from visible-wavelength observations of similar, very young galaxies by the Hubble Space Telescope and other telescopes.

Further analysis and simulations have shown that this smaller mass for the galaxies is a sweet spot for star formation. Less massive galaxies find it hard to form more than a first generation of stars before fizzling out. At the other end of the scale, more massive galaxies struggle because their gas cools rather slowly, preventing it from collapsing down to the high densities needed to ignite star formation. 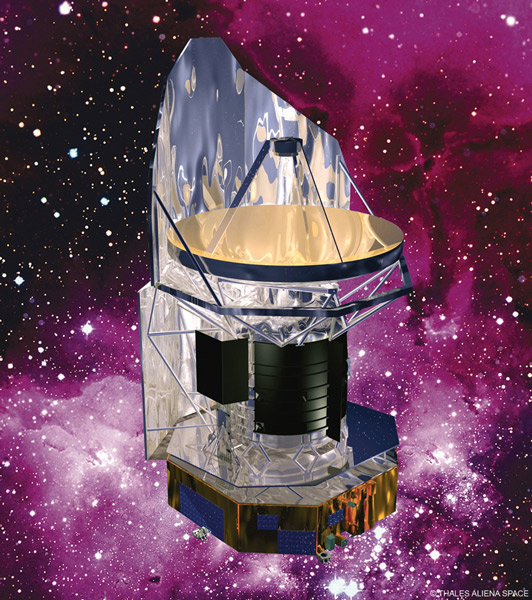 “This is the first direct observation of the preferred mass scale for igniting a starburst,” says Dr Cooray.

Models of galaxy formation can now be adjusted to reflect these new results, and astronomers can take a step closer to understanding how galaxies – including our own –came into being.

Why infrared astronomy is a hot topic: http://www.esa.int/esaSC/SEMX9PZO4HD_index_0.html