Radar data collected by ESA’s Mars Express point to a pond of liquid water buried under layers of ice and dust in the south polar region of Mars.

Evidence for the Red Planet’s watery past is prevalent across its surface in the form of vast dried-out river valley networks and gigantic outflow channels clearly imaged by orbiting spacecraft. Orbiters, together with landers and rovers exploring the martian surface, also discovered minerals that can only form in the presence of liquid water. 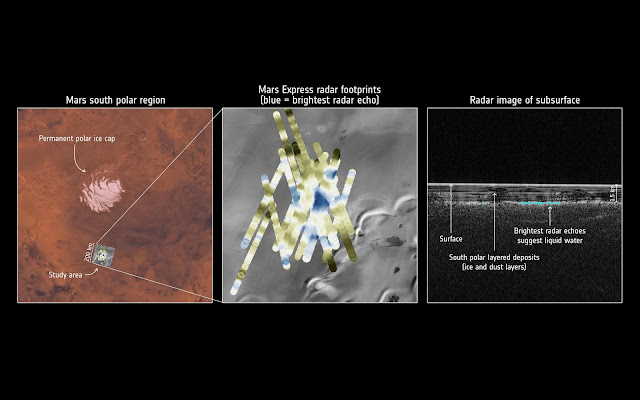 But the climate has changed significantly over the course of the planet’s 4.6 billion year history and liquid water cannot exist on the surface today, so scientists are looking underground. Early results from the 15-year old Mars Express spacecraft already found that water-ice exists at the planet’s poles and is also buried in layers interspersed with dust.

The presence of liquid water at the base of the polar ice caps has long been suspected; after all, from studies on Earth, it is well known that the melting point of water decreases under the pressure of an overlying glacier. Moreover, the presence of salts on Mars could further reduce the melting point of water and keep the water liquid even at below-freezing temperatures. 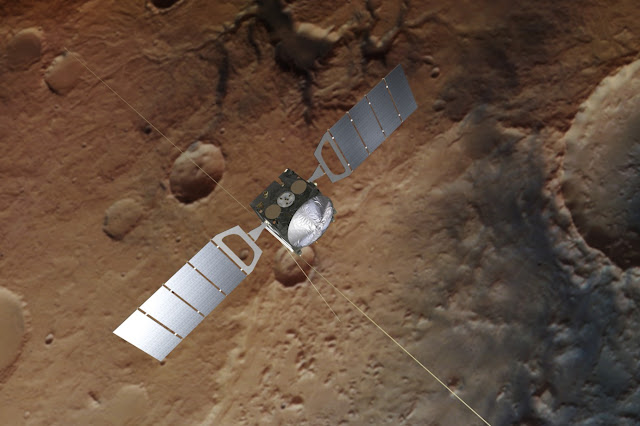 But until now evidence from the Mars Advanced Radar for Subsurface and Ionosphere Sounding instrument, MARSIS, the first radar sounder ever to orbit another planet, remained inconclusive.

It has taken the persistence of scientists working with this subsurface-probing instrument to develop new techniques in order to collect as much high-resolution data as possible to confirm their exciting conclusion.

Ground-penetrating radar uses the method of sending radar pulses towards the surface and timing how long it takes for them to be reflected back to the spacecraft, and with what strength. The properties of the material that lies between influences the returned signal, which can be used to map the subsurface topography.

The radar investigation shows that south polar region of Mars is made of many layers of ice and dust down to a depth of about 1.5 km in the 200 km-wide area analysed in this study. A particularly bright radar reflection underneath the layered deposits is identified within a 20 km-wide zone.

Analysing the properties of the reflected radar signals and considering the composition of the layered deposits and expected temperature profile below the surface, the scientists interpret the bright feature as an interface between the ice and a stable body of liquid water, which could be laden with salty, saturated sediments. For MARSIS to be able to detect such a patch of water, it would need to be at least several tens of centimetres thick.

“This subsurface anomaly on Mars has radar properties matching water or water-rich sediments,” says Roberto Orosei, principal investigator of the MARSIS experiment and lead author of the paper published in the journal Science today.

“This is just one small study area; it is an exciting prospect to think there could be more of these underground pockets of water elsewhere, yet to be discovered.”

ExoMars image of layered deposits at the south pole of Mars

“We’d seen hints of interesting subsurface features for years but we couldn’t reproduce the result from orbit to orbit, because the sampling rates and resolution of our data was previously too low,” adds Andrea Cicchetti, MARSIS operations manager and a co-author on the new paper.

“We had to come up with a new operating mode to bypass some onboard processing and trigger a higher sampling rate and thus improve the resolution of the footprint of our dataset: now we see things that simply were not possible before.”

The finding is somewhat reminiscent of Lake Vostok, discovered some 4 km below the ice in Antarctica on Earth. Some forms of microbial life are known to thrive in Earth’s subglacial environments, but could underground pockets of salty, sediment-rich liquid water on Mars also provide a suitable habitat, either now or in the past? Whether life has ever existed on Mars remains an open question, and is one that Mars missions, including the current European-Russian ExoMars orbiter and future rover, will continue to explore.

“The long duration of Mars Express, and the exhausting effort made by the radar team to overcome many analytical challenges, enabled this much-awaited result, demonstrating that the mission and its payload still have a great science potential,” says Dmitri Titov, ESA’s Mars Express project scientist.

“This thrilling discovery is a highlight for planetary science and will contribute to our understanding of the evolution of Mars, the history of water on our neighbour planet and its habitability.”

Mars Express launched 2 June 2003 and celebrates 15 years in orbit on 25 December this year.

“Radar evidence of subglacial liquid water on Mars” by R. Orosei et al is published in the journal Science: http://science.sciencemag.org/content/early/2018/07/24/science.aar7268.full

The MARSIS instrument was funded by the Italian Space Agency (ASI) and NASA and developed by the University of Rome, Italy, in partnership with NASA’s Jet Propulsion Laboratory.

Four more Galileo satellites were launched today by an Ariane 5. Their arrival in orbit brings the Galileo constellation to 26 satellites, extending the global coverage of the constellation. 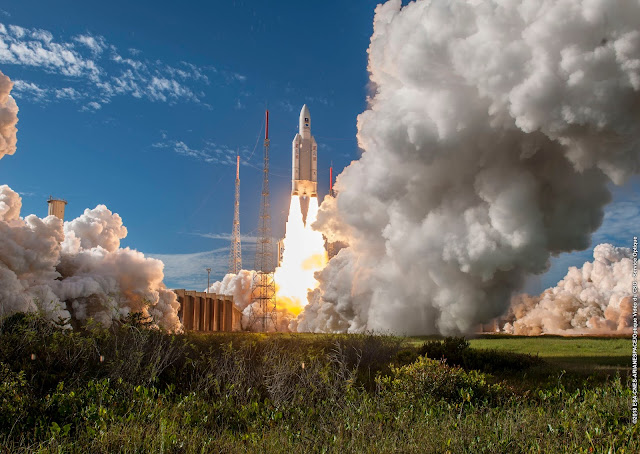 They were released into their target 22 922 km-altitude orbit by the dispenser atop the Ariane 5 upper stage. In the coming days, this quartet will be steered into their final working orbits by the French space agency CNES, under contract to the Galileo operator SpaceOpal for the European Global Navigation Satellite System Agency (GSA). There, they will begin around six months of tests by SpaceOpal to verify their operational readiness so they can join the working Galileo constellation. 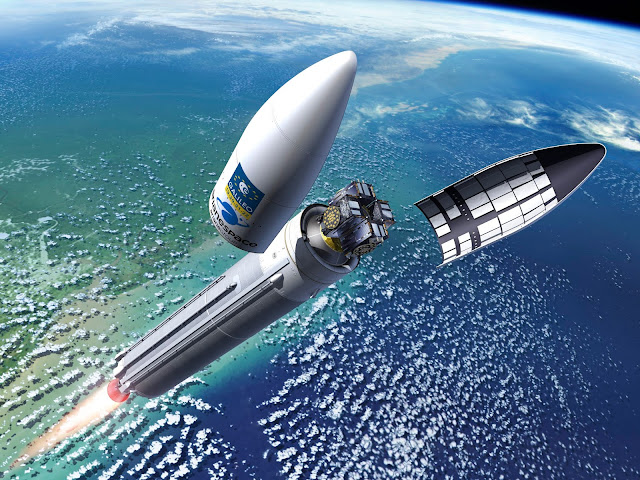 “We must thank our industrial partners OHB (DE) and SSTL (GB) for the satellites, as well as Thales Alenia Space (FR/IT) and Airbus Defence and Space (GB/FR) for the ground segment and all their subcontractors throughout Europe for their continued support to the programme. Together with ESA, the entire industrial team has worked hard for the point at which we now are and this cooperation have proven to be very successful, as we can show in the excellent performance of Galileo.” 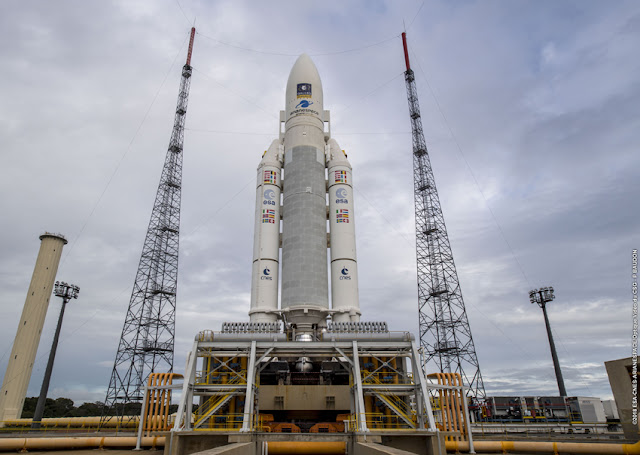 Paul Verhoef, ESA’s Director of Navigation, added, “Galileo has been providing Initial Services on a worldwide basis since 15 December 2016, and today has more than 100 million users, and rapidly increasing. Today’s satellites will increase the global coverage of Galileo with a performance that is widely recognised as excellent.

“This is the end of the current phase of Galileo deployment, but our pace is not slacking. A further 12 Galileo ‘Batch 3’ satellites are in preparation as in-orbit spares and as replacements for the oldest Galileo satellites, first launched in 2011, in order to keep the system working seamlessly into the future. 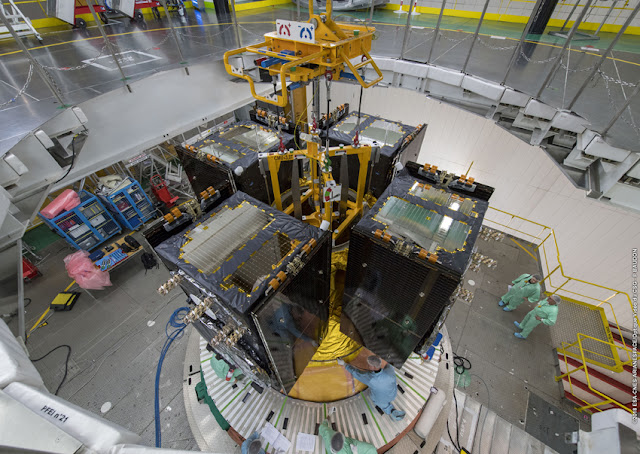 “Then a new generation of Galileos are planned for the middle of the next decade, offering improved performance and added features, maintaining Galileo as a permanent feature of the global GNSS landscape.”

Galileo is Europe’s civil global satellite navigation system. Once complete, the system will consist of 24 operational satellites plus orbital spares, and the ground infrastructure for the provision of positioning, navigation and timing services. But the system is already available to users with recent receivers which combine the Galileo and GPS navigation messages for a more precise positioning.

The Galileo programme is funded and owned by the EU. The European Commission has the overall responsibility for the programme, managing and overseeing the implementation of all programme activities. 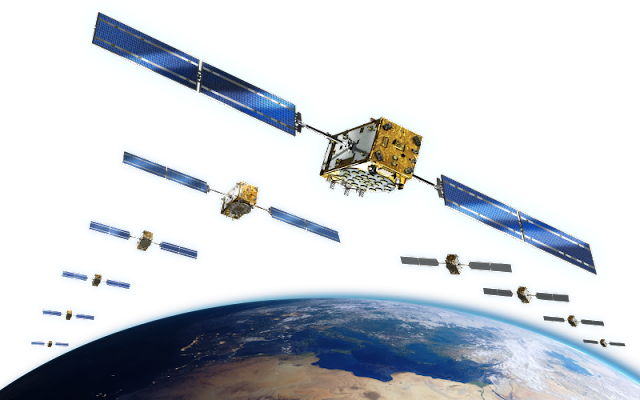 Galileo’s deployment, the design and development of the new generation of systems and the technical development of infrastructure are entrusted to ESA. The definition, development and in-orbit validation phases were carried out by ESA, and co‑funded by ESA and the European Commission.

GSA is ensuring the uptake and security of Galileo. Galileo operations and provision of services were entrusted to the GSA in July 2017.