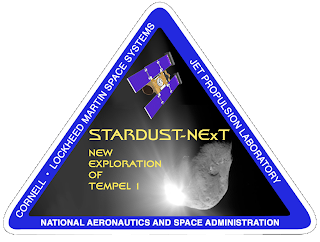 NASA's Stardust spacecraft returned new images of a comet showing a scar resulting from the 2005 Deep Impact mission. The images also showed the comet has a fragile and weak nucleus. 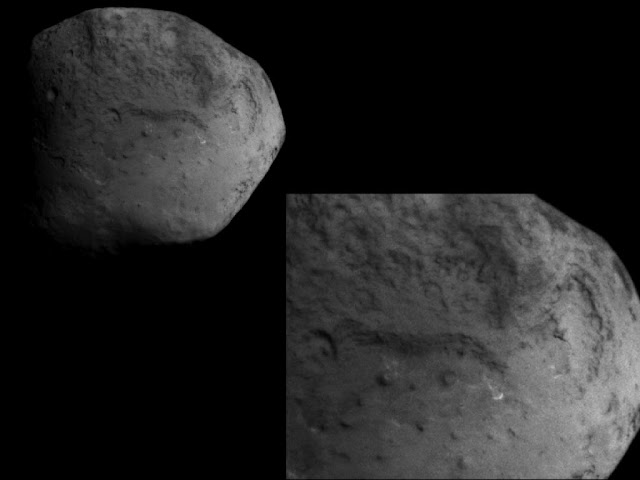 This image obtained by NASA's Stardust spacecraft shows a side of the nucleus of comet Tempel 1 that has never been seen before. In the image, three terraces of different elevations are visible, with dark, banded scarps, or slopes, separating them. The widest of the banded slopes is about 2 kilometers (1 mile). The lowest terrace has two circular features that are about 150 meters (500 feet) in diameter. 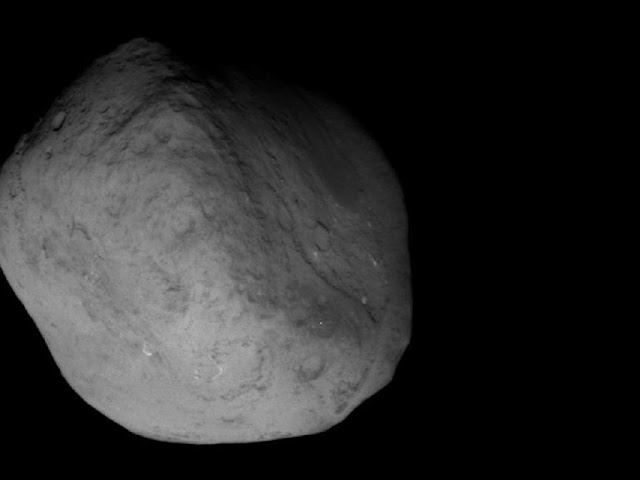 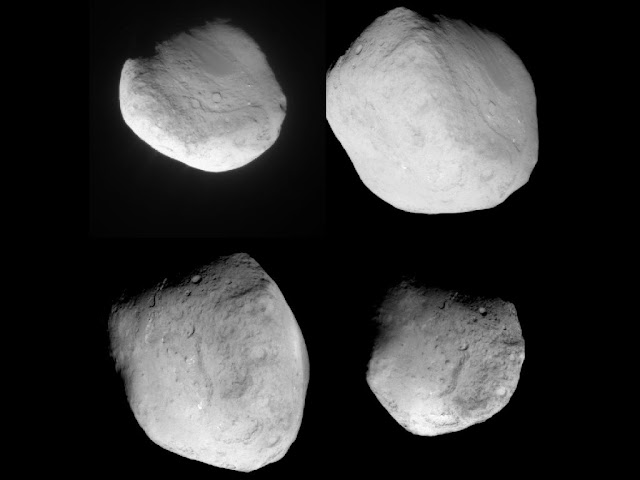 This image mosaic shows four different views of comet Tempel 1 as seen by NASA's Stardust spacecraft as it flew by on Feb. 14, 2011 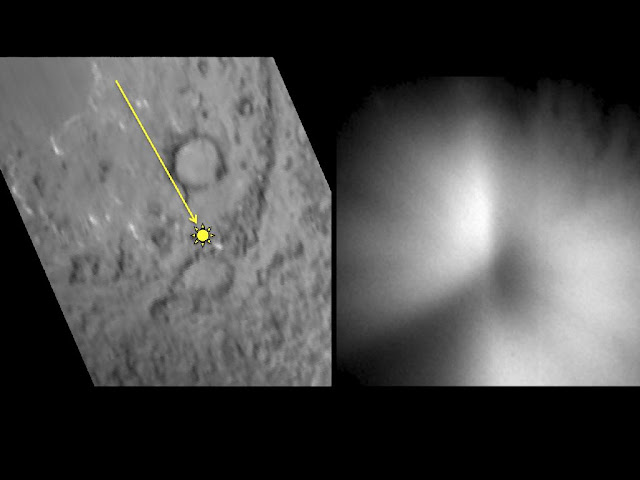 This pair of images shows a before-and-after comparison of the area on comet Tempel 1 targeted by an impactor from NASA's Deep Impact spacecraft in July 2005. The left-hand image is one of the last obtained of the Tempel 1 surface by the impactor's high resolution imager before the impactor hit the surface. An arrow shows the direction the impactor traveled toward the surface, with a yellow spot that shows the impact target.

The spacecraft made its closest approach to comet Tempel 1 on Monday, Feb. 14, at 8:40 p.m. PST at a distance of approximately 111 miles. Stardust took 72 high-resolution images of the comet. It also accumulated 468 kilobytes of data about the dust in its coma, the cloud that is a comet's atmosphere. The craft is on its second mission of exploration called Stardust-NExT, having completed its prime mission collecting cometary particles and returning them to Earth in 2006. 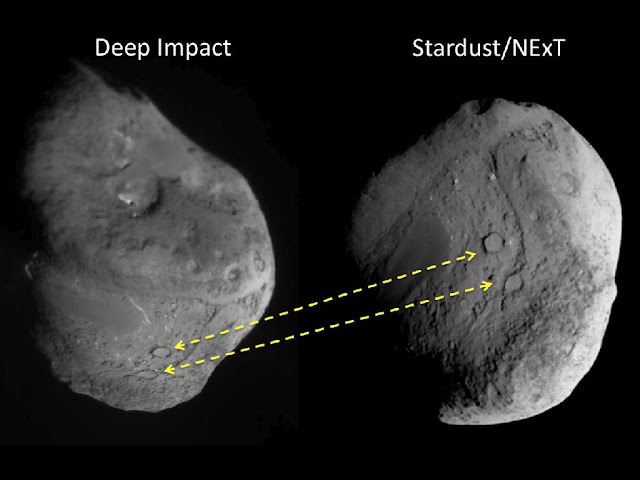 The Stardust-NExT mission met its goals which included observing surface features that changed in areas previously seen during the 2005 Deep Impact mission; imaging new terrain; and viewing the crater generated when the 2005 mission propelled an impactor at the comet. 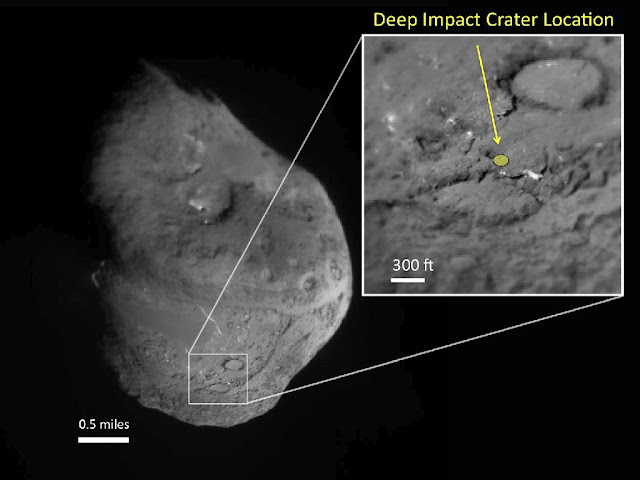 This image is part of a news conference about NASA's Stardust-NExT mission
"This mission is 100 percent successful," said Joe Veverka, Stardust-NExT principal investigator of Cornell University, Ithaca, N.Y. "We saw a lot of new things that we didn't expect, and we'll be working hard to figure out what Tempel 1 is trying to tell us." Several of the images provide tantalizing clues to the result of the Deep Impact mission's collision with Tempel 1. 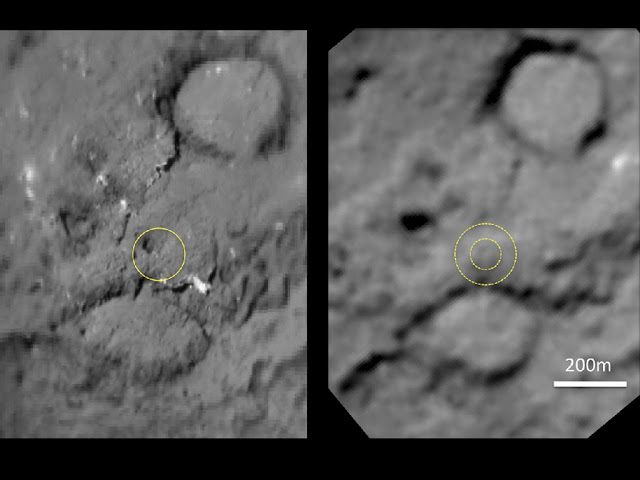 This pair of images shows the area affected by the impactor released by NASA's Deep Impact spacecraft in July 2005. On the left, the image from Deep Impact shows a dark mound about 50 meters (160 feet) in size. It is inside a yellow circle that shows the area hit by the impactor released by Deep Impact. The image on the right, newly obtained by NASA's Stardust spacecraft, shows the impactor erased that dark mound and flattened the area. The outer circle annotated on the right-hand image shows the outer rim of the crater and the inner circle shows the crater floor. The crater is estimated to be 150 meters (500 feet) in diameter.

"We see a crater with a small mound in the center, and it appears that some of the ejecta went up and came right back down," said Pete Schultz of Brown University, Providence, R.I. "This tells us this cometary nucleus is fragile and weak based on how subdued the crater is we see today." 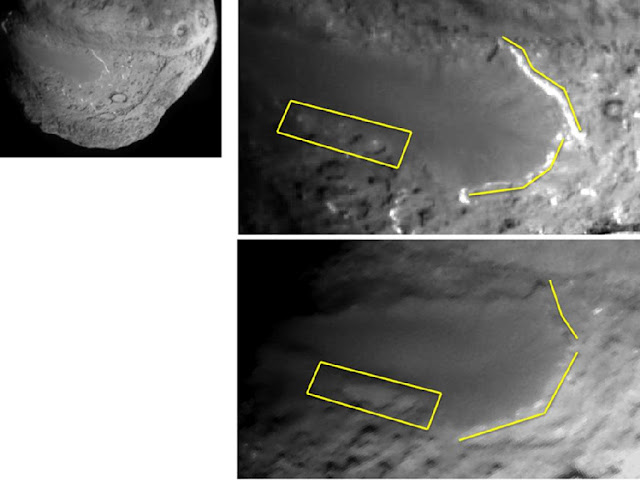 This image layout depicts changes in the surface of comet Tempel 1, observed first by NASA's Deep Impact Mission in 2005 (top right) and again by NASA's Stardust-NExT mission on Feb. 14, 2011 (bottom right). Between the two visits, the comet made one trip around the sun. The image at top left is a wider shot from Deep Impact.

Engineering telemetry downlinked after closest approach indicates the spacecraft flew through waves of disintegrating cometary particles including a dozen impacts that penetrated more than one layer of its protective shielding.

"The data indicate Stardust went through something similar to a B-17 bomber flying through flak in World War II," said Don Brownlee, Stardust-NExT co-investigator from the University of Washington in Seattle. "Instead of having a little stream of uniform particles coming out, they apparently came out in chunks and crumbled."

While the Valentine's Day night encounter of Tempel 1 is complete, the spacecraft will continue to look at its latest cometary obsession from afar.

"This spacecraft has logged over 3.5 billion miles since launch, and while its last close encounter is complete, its mission of discovery is not," said Tim Larson, Stardust-NExT project manager at JPL. "We'll continue imaging the comet as long as the science team can gain useful information, and then Stardust will get its well-deserved rest."

Stardust-NExT is a low-cost mission that is expanding the investigation of comet Tempel 1 initiated by the Deep Impact spacecraft. The mission is managed by JPL for NASA's Science Mission Directorate in Washington. Lockheed Martin Space Systems in Denver built the spacecraft and manages day-to-day mission operations.