China's second moon orbiter Chang'e-2 on Thursday set off from its moon orbit for outer space about 1.5 million km away from the earth, Chinese scientists said Thursday.

The orbiter left its moon orbit at 5:10 p.m. and it will take about 85 days for the orbiter to reach outer space, according to the State Administration of Science,Technology and Industry for National Defence (SASTIND). The orbiter had finished all its tasks within its designed life span of six months by April 1. Scientists decided to let it carry out additional exploratory tasks as the orbiter still had fuel in reserve. 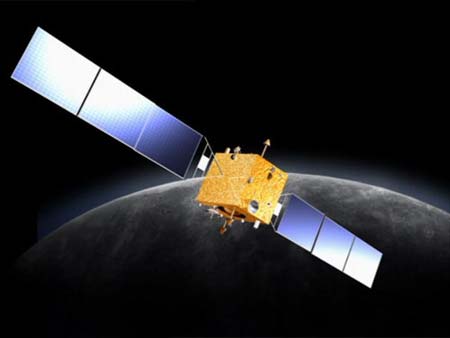 Chang'e-2 China is going deep
Traveling into outer space from the moon's orbit is the most important task among five additional ones, according to the SASTIND. "It's the first time in the world for a satellite to be set off from the moon in remote outer space," said Zhou Jianliang, deputy chief engineer of the Chang'e-2 measure and control system of the Beijing Aerospace Control Center (BACC).

Moon exploration means about 400,000 km away from the earth, but outer space exploration means 1.5 million km, posing great challenges to the country's technology in measure and control, telecommunications, data transaction and orbit design, scientists said. Before flying away, the orbiter had finished two additional tasks as of May 23.

One was to take photos of the northern and southern poles of the moon. The other was to descend again to the perilune orbit, about 15 km away from the surface, to catch high-resolution images of the Sinus Iridum, or Bay of Rainbows, the proposed landing ground for future moon missions. Scientists hope the satellite can continue operations until the end of next year.

"We are developing outer space measure and control stations in outer space and they will be capable to carry out tasks by the end of the second half next year," said an SASTIND scientist, who declined to be named. At that time, the satellite can be used to test the two stations' functions, the scientist said.

Challenges exist as Chang'e-2 was not designed for the additional task and it is now in extended service without extra capacities to deal with abnormal risks, Zhou said. Meanwhile, long-distance brings many problems like weakening signals and difficulties in measure and control, Zhou said. The Chang'e probes are named after a legendary Chinese moon goddess who flew to the moon.


Video of the mission Chang'e-2
Besides the current operations, China's ambitious three-stage moon mission will include a moon landing and launch of a moon rover around 2012 in the second phase. In the third phase, another rover will land on the moon and return to earth with lunar soil and stone samples for scientific research around 2017. The country has no plan or timetable for a manned moon landing for now.

China launched its first lunar probe, Chang'e-1, in October 2007. It became the third country after Russia and the United States to send a person into space in 2003. Two more manned space missions followed with the more recent in 2008 involving the country's first human space walk.