ESA today awarded a contract worth almost €150 million to Astrium to develop and build two satellite sensors that will monitor Earth's atmosphere as part of Europe's Global Monitoring for Environment and Security programme.

The identical spectrometers, known as Sentinel-4, will each be carried on Meteosat Third Generation (MTG) weather satellites, to be launched in 2019 and 2027.

From geostationary orbit 36 000 km above the equator, Sentinel-4 will provide data every hour on the chemical composition of the atmosphere including trace gases and ultraviolet radiation.


Sentinel-4
By providing data on sulphur dioxide and aerosols over Europe, the mission will also help to improve the monitoring of plumes from volcanic eruptions.

Marking the go-ahead for these specialised sensors, the contract was signed by Volker Liebig, ESA's Director of Earth Observation Programmes, and Evert Dudok, CEO of Astrium Satellites, at the company's premises in Ottobrunn near Munich in Germany.

"Sentinel-4 will be the first spectrometer of this kind placed in geostationary orbit. 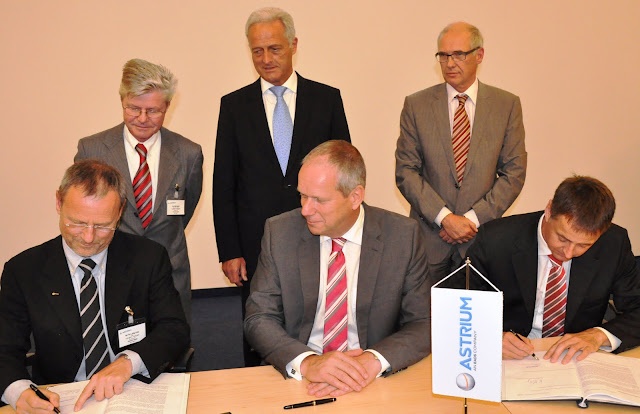 Signing of Sentinel-4 contract
"This mission will not only provide accurate data for air quality forecasting services, but also provide information about greenhouse gases that can be used by decision-makers in formulating strategies aimed at reducing emissions."

Sentinel-4 is one of a family of five missions ESA is developing for the EU's Global Monitoring for Environment and Security (GMES) programme.

Through GMES, decision-makers will have reliable, timely and accurate information to manage the environment, understand and mitigate the effects of climate change and ensure civil security.

These services will be realised through the integration of data collected from space, from the air, at sea and on the ground. However, the space component forms the backbone of the programme. 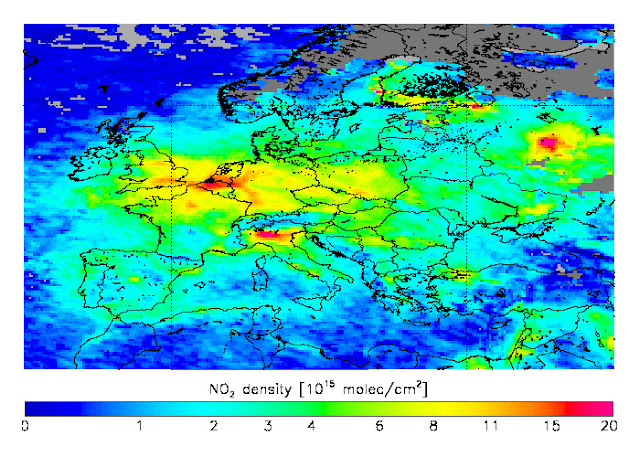 NO2 over Europe monitored by GOME-2
ESA's first GMES satellite, Sentinel-1, is planned to be launched in 2013.

Taking advantage of the long-standing collaboration between ESA and Eumetsat, each full Sentinel-4 mission will comprise the ultraviolet–visible–near-infrared spectrometer that Astrium will build, along with data from Eumetsat's thermal-infrared sensor. Both instruments will be carried on MTG-Sounder satellites.

In addition, the Sentinel-4 mission will also make use of data from the imager that will be flown on the MTG-Imager satellites.

For example, the data from Sentinel-4 on sulphur dioxide and aerosols will complement those provided by the MTG-Imager for volcanic plume monitoring. 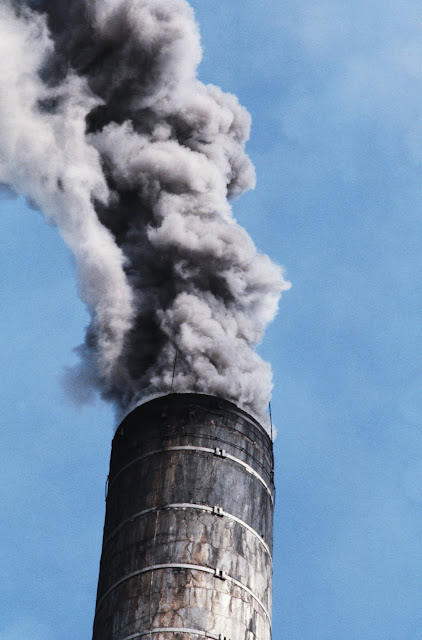 Sentinels-4 will provide data to monitor air pollution
MTG is a cooperative venture between Eumetsat and ESA ensuring continuity with the Meteosat Second Generation satellites currently in operation.

"Sentinel-4 will be an important MTG instrument for high-definition monitoring of the atmosphere over Europe," said Mr Dudok.

"As prime industrial contractor, Astrium will coordinate the work of 45 companies in 11 European countries for the construction of the two instruments."