This video catches the moment when a Draconid meteor exploded in Earth's atmosphere earlier this month. The dramatic footage comes from a campaign to observe this important meteor shower using aircraft to beat the clouds.

On the evening of Saturday 8 October, Earth plunged through a stream of dust and rocks that had been expelled into space by the comet Giacobini–Zinner. The resultant meteor shower lit the skies over Europe with shooting stars.


A Draconid meteor burns up as a fireball in the atmosphere of Earth on 8 October 2011
The display radiates from the constellation of Draco, The Dragon, giving the name of "Draconids" to this shower which occurs at the same time every year as the Earth passes through the debris trail. In 2011, however, there was a difference. Astronomers had predicted an unusually high numbers of meteors as Earth was due to encounter particularly dense patches of the cometary detritus.

Detlef Koschny, leader of the Meteor Research Group at ESA, led the Agency's involvement in a project to find out if the prediction was right.

With cameras and other equipment packed into two Falcon-20 research planes, Detlef's colleagues took to the skies over Europe to rise above the clouds and watch for meteors. 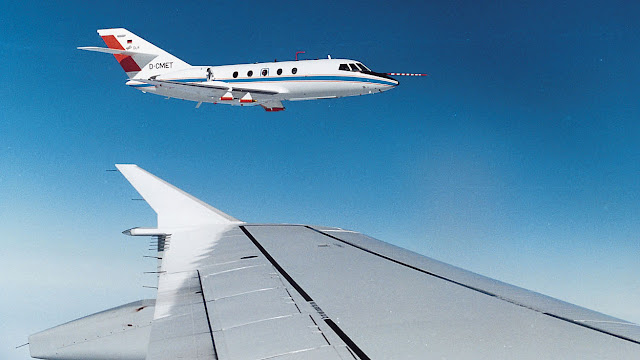 DLR research aircraft's Falcon 20 E
"The Draconids peaked as predicted. A small peak at 17:30 GMT and then a larger one at 20:05 GMT," says Detlef.

The two planes flew on parallel tracks roughly 100 km apart as the researchers pointed their cameras at the same volume of Earth's atmosphere. The data they collected will allow each meteor to be triangulated, to determine its altitude and trajectory. Typically, meteors burn up between 80-120 km above the ground, well above the cruising altitude of an airliner. This will give updated information about the meteor stream itself, and the way the comet ejected the material.

It has been calculated that most of the meteors hitting Earth that night were ejected by comet Giacobini–Zinner in 1900 and have been circling the Sun ever since.

The team also recorded the spectrum of at least one meteor, which will reveal its chemical composition.

The Draconid meteor stream is important to understand because, like other streams, it can pose a danger to orbiting spacecraft. The tiny impacts can damage solar panels or sensitive optics.

The Draconids tend to be overlooked in favour of more visible displays such as the Leonids in November. This could be a mistake according to Detlef: "The Draconids move more slowly relative to Earth, so we don't see all of the smaller ones burning up. But they are still there, probably as many in number as the Leonids, only its harder to find them."

The airborne observing campaign was led by Jeremie Vaubaillon (IMCCE, Paris) and Pavel Koten (Ondrejov Observatory). Jonathan McAuliffe from ESA / ESAC and Joe Zender from ESA / ESTEC were flying on the Falcon-20 aircraft to operate the cameras.