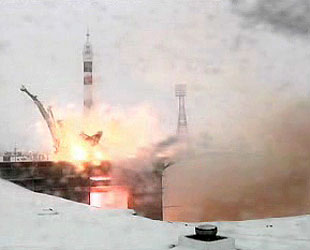 Image above: Soyuz TMA-22 launches for the International Space Station as snow falls at the Baikonur Cosmodrome. (NASA TV). 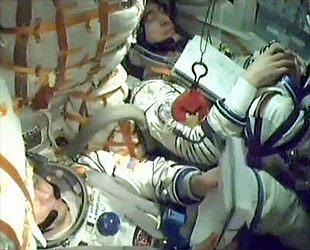 Image above: A stuffed doll of a red bird from the mobile game "Angry Birds" hangs inside Soyuz TMA-22 as a "zero-G indicator." (NASA TV).

After 528 seconds of flight rocket TPK "Soyuz TMA-22" cleanly separated from the third stage to orbit an artificial satellite.

Last of its type 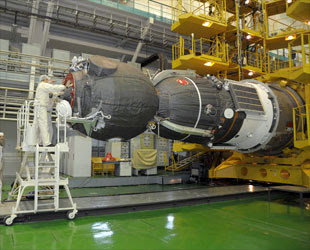 Image above: Soyuz TMA-22, the last of the TMA-class spacecraft, seen being readied for launch at the Baikonur Cosmodrome. (RSC Energia).

Soyuz TMA-22's launch also began the last flight of the TMA-class spacecraft. Since last year, Russia has been phasing in use of "digital" Soyuz TMA-M-class capsules, which have been upgraded to feature modern navigation and control systems.

Soyuz TMA-03M is scheduled to lift off on Dec. 21, 2011, with Expedition 30 crewmembers Oleg Kononenko, André Kuipers and Don Pettit.

The first of the TMA vehicles launched to the International Space Station nine years ago in 2002. Like the TMA-M, the TMA superseded an earlier version of the Soyuz, the TM-class, used since 1986.

Soyuz TMA-22 is the 111th Soyuz spacecraft to fly since the very first Soyuz (simply "Soyuz 1") on April 23, 1967. Almost all of the crewed Soyuz lifted off from the same pad, referred to as "Gagarin's Start," after the world's first human in space, Yuri Gagarin, who departed Earth from the same pad 50 years ago.