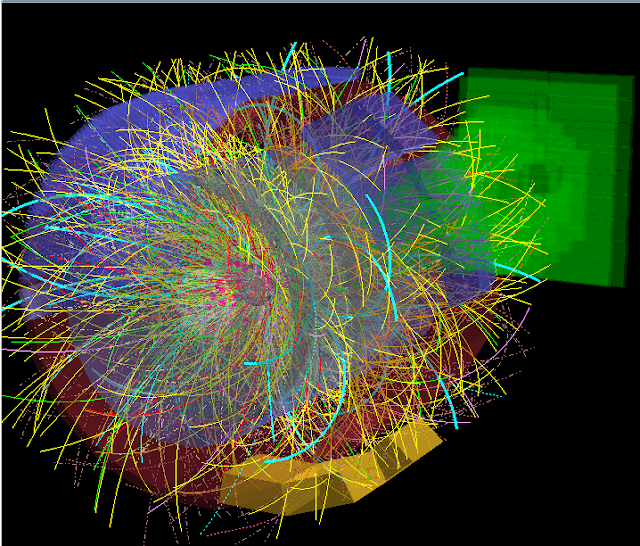 A lead-ion collision recorded by the ALICE experiment during the 2011 run
After several months of proton collisions, the LHC is embarking on a period of lead ion running, which will last until 7 December. This should provide large quantities of data, as the LHC's performance has been dramatically improved since the first lead-ion run in 2010.

Lead ion collisions will be studied in detail by the ALICE experiment, which is optimised for lead ions, as well as by the ATLAS and CMS experiments. By studying these collisions, physicists probe matter as it would have been in the first instants of the Universe's existence. One of their main objectives is to make tiny quantities of such matter, known as Quark Gluon Plasma, and to study how it evolved into the matter that makes up the Universe today.

The European Organization for Nuclear Research (French: Organisation européenne pour la recherche nucléaire), known as CERN, is an international organization whose purpose is to operate the world's largest particle physics laboratory, which is situated in the northwest suburbs of Geneva on the Franco–Swiss border. Established in 1954, the organization has twenty European member states.

The term CERN is also used to refer to the laboratory itself, which employs just under 2400 full-time employees / workers, as well as some 7931 scientists and engineers representing 608 universities and research facilities and 113 nationalities.