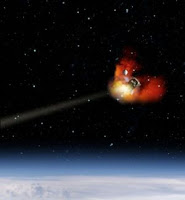 
CleanSpace One - a Swiss satellite to tackle space junk
The proliferation of debris orbiting the Earth – primarily jettisoned rocket and satellite components – is an increasingly pressing problem for spacecraft, and it can generate huge costs. To combat this scourge, the Swiss Space Center at EPFL is announcing today the launch of CleanSpace One, a project to develop and build the first installment of a family of satellites specially designed to clean up space debris.

The Earth’s orbit is full of all kinds of floating debris; a growing crowd of abandoned satellites, spent rocket stages, bits of broken spacecraft, and fragments from collisions are rocketing around the planet at breathtaking speeds. NASA keeps close tabs on at least 16,000 of these objects that are larger than 10 cm in diameter. When an operational spacecraft such as a satellite collides with one of them, serious, costly damage can result; often the satellite is complete destroyed. And the collision itself then generates thousands more fragments, further exacerbating the problem. 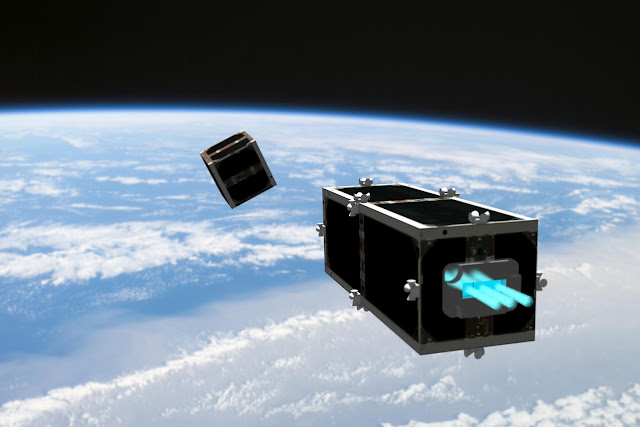 CleanSpace One approach SwissCube satellite
“It has become essential to be aware of the existence of this debris and the risks that are run by its proliferation,” says Claude Nicollier, astronaut and EPFL professor. To move beyond mere rhetoric and take immediate action to get this stuff out of orbit, the Swiss Space Center at EPFL is launching CleanSpace One, a project to build the first prototype in a family of “de-orbiting” satellites.

The project developers have chosen a symbolic target for the initial CleanSpace One launch: either Switzerland’s first orbiting object, the Swisscube picosatellite which was put in orbit in 2009, or its cousin TIsat, launched in July 2010.

The cleanup satellite has three major challenges to overcome, each of which will necessitate the development of new technology that could, in turn, be used down the road in other applications. 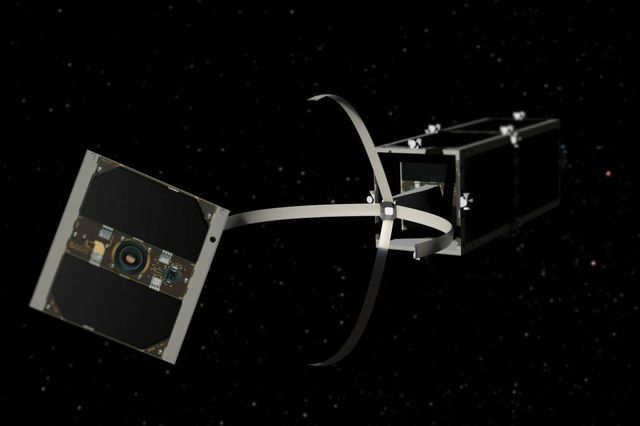 CleanSpace One approach SwissCube satellite
After its launch, the cleanup satellite will have to adjust its trajectory in order to match its target’s orbital plane. To do this, it could use a new kind of ultra-compact motor designed for space applications that is being developed in EPFL laboratories. When it gets within range of its target, which will be traveling at 28,000 km/h at an altitude of 630-750 km, CleanSpace One will grab and stabilize it – a mission that’s extremely dicey at these high speeds, particularly if the satellite is rotating. To accomplish the task, scientists are planning to develop a gripping mechanism inspired from a plant or animal example. Finally, once it’s coupled with the satellite, CleanSpace One will “de-orbit” the unwanted satellite by heading back into the Earth’s atmosphere, where the two satellites will burn upon re-entry.

Although its first model is destined to be destroyed, the CleanSpace One adventure will not be a one-shot deal. “We want to offer and sell a whole family of ready-made systems, designed as sustainably as possible, that are able to de-orbit several different kinds of satellites,” explains Swiss Space Center Director Volker Gass. “Space agencies are increasingly finding it necessary to take into consideration and prepare for the elimination of the stuff they’re sending into space. We want to be the pioneers in this area.” 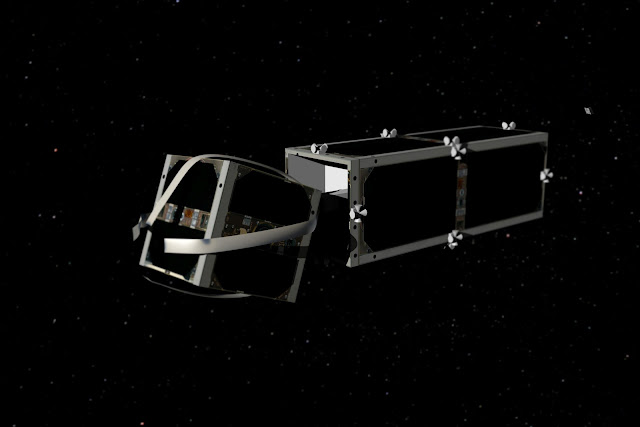 CleanSpace One capture SwissCube satellite
The design and construction of CleanSpace One, as well as its maiden space voyage, will cost about 10 million Swiss francs. Depending on the funding and industrial partners, this first orbital rendez-vous could take place within three to five years.

16,000 objects larger than 10 cm in diameter and hundreds of millions of smaller particles are ripping around the Earth at speeds of several kilometers per second. From the beginning of the Space Age, Earth’s periphery has been increasingly encumbered by all kinds of debris, primarily concentrated in Low Earth Orbit (less than 2000 km in altitude, where the International Space Station is orbiting) or Geostationary Orbit (35,786 km in altitude). Many of these objects are spent rocket stages or satellites that have broken up in orbit. If they collide with another orbiting object, say a functioning satellite, they can cause massive damage, or even destroy it. This is what happened on February 10, 2009, when the U.S. satellite Iridium-33 exploded upon impact with the abandoned Russian satellite Cosmos-2251. The financial consequences of these collisions are enormous, particularly for insurance companies involved in the space sector; a sum currently estimated at $20 billion to insure existing satellites. 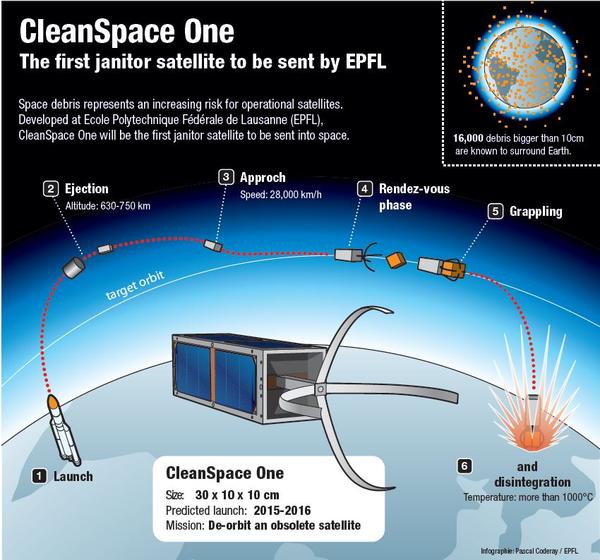 CleanSpace One process
Cases such as this one are bound to increase in number. Even in the immensity of outer space, the increasing density of human-generated waste is becoming a problem. It’s expanding exponentially, because each collision generates in turn several thousand more fragments, which, although smaller, are no less dangerous than a large, abandoned satellite. NASA, which tracks 16,000 of these objects, can only monitor the largest ones (greater than 10 cm in diameter) – but at these incredible speeds even a simple paint chip can seriously damage a solar panel or the window on a shuttle. To avoid the largest objects before they get critically close, the International Space Station must constantly alter its orbit. It managed to do this again just recently, on January 29, 2012.

Last year the Swiss Re insurance company published a study showing that every year, there is a nearly one in 10,000 chance that a 10 m2 satellite traveling in a sun-synchronous (600-1,000 km) orbit will collide with a piece of space debris larger than 1 cm.