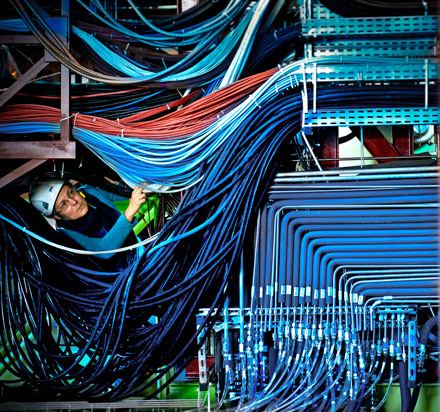 Image above: Physicist Despina Hatzifotiadou inspects the wiring on the ALICE detector at the Large Hadron Collider (Image: CERN).

In just two weeks of operation in "stable beams" mode, the Large Hadron Collider (LHC) has aready reached 1380 proton bunches per beam, the maximum value set for this year. The number of bunches was increased in steps from 624 to then 840 bunches last week, and now from 1092 to 1380.

The machine has also exceeded the maximum peak luminosity – a measure of the instantaneous collision rate – achieved in 2011. The LHC has now reached 3.9 × 1033 collisions per square centimetre per second, while the top value for last year was 3.6 × 1033 cm-2 s-1. Stable beams mode enables the experiments to collect data for physics analysis.

So far this year the total amount of data delivered to the experiments – the integrated luminosity – is now about 0.6 inverse femtobarn, a measure of accelerator performance equivalent to about 60 trillion collisions. Last year, it took about 12 weeks of operation to reach that number. 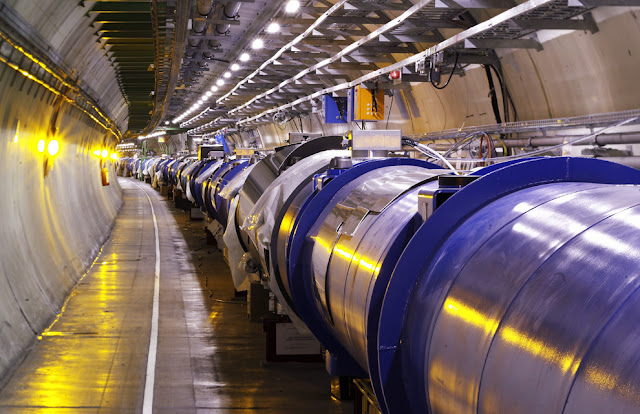 LHC tunnel (Credit: CERN)
This year, the higher collision energy of 4 TeV per beam (compared to 3.5 TeV per beam in 2011) and the resulting higher number of collisions expected both enhance the machine's discovery potential considerably, opening up new possibilities for searches for new and heavier particles. So keep an eye on us!

1. CERN, the European Organization for Nuclear Research, is the world's leading laboratory for particle physics. It has its headquarters in Geneva. At present, its Member States are Austria, Belgium, Bulgaria, the Czech Republic, Denmark, Finland, France, Germany, Greece, Hungary, Italy, the Netherlands, Norway, Poland, Portugal, Slovakia, Spain, Sweden, Switzerland and the United Kingdom. Romania is a candidate for accession. Israel is an Associate Member in the pre-stage to Membership. India, Japan, the Russian Federation, the United States of America, Turkey, the European Commission and UNESCO have Observer status.