Solar Impulse fly to Morocco, to conquer a new continent 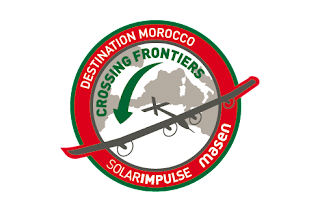 The Solar Impulse set sail Tuesday on Morocco after taking off at dawn in Madrid, for the first time to conquer a new continent. 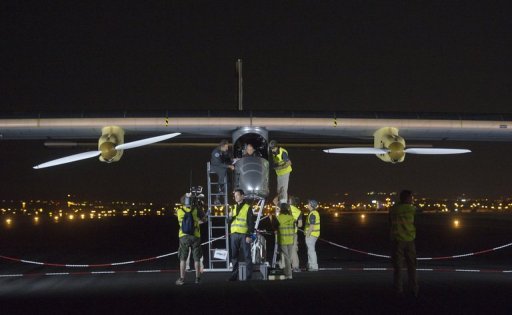 Image above: Technicians and the Swiss driver Bernard Piccard preparing the Solar Impulse before his flight to Morocco, June 5, 2012 in Madrid (AFP Dominique Faget).

The plane, piloted by Bertrand Piccard Switzerland, co-founder of the project, flew smoothly, almost silently, the airport of Madrid-Barajas to 5:22 (3:22 ​​GMT). He headed to the south of Spain, flying, at sunrise, landscapes flooded with light.

For an hour I had a full moon on my right and the sunrise on my left, it's absolutely magical. I had all the colors of the rainbow in the sky and also on land, told from the cockpit Bertrand Piccard, explorer, 54, reached by telephone by AFP.

Solar Impulse is the first aircraft designed to fly day and night without fuel or polluting emissions, thanks to solar energy.

The carbon fiber aircraft is powered by four electric motors, a power of 10 horsepower each, powered by 12,000 photocells covering its huge wing.

Energy is stored during the day in batteries, allowing the aircraft to fly at night. 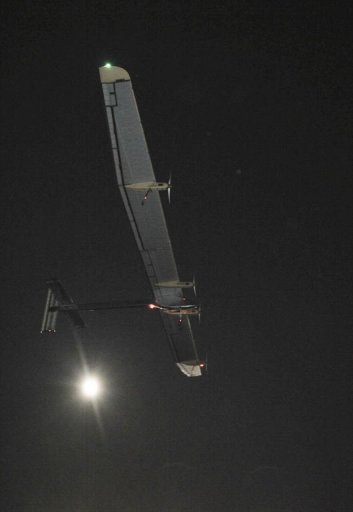 Solar Impulse has the wingspan of an Airbus A340 (63.4 meters) but weighs only 1.6 tons, or the weight of an average car.

At sunrise, a camera mounted on the aircraft has released images of the valleys south of Madrid, while the aircraft was en route to Seville in southern Spain.

The goal is not to use solar energy for normal aircraft, the pilot explained.

The goal is to prove that we can achieve outstanding goals, almost impossible with new technologies, without fuel, and make people aware that if we can do in heaven, of course anyone can do it on the ground .

After flying over the south of Spain at 3,600 meters and a speed of about 40 km / hour, Bertrand Piccard should gradually lead his plane at 8,500 meters above the Strait of Gibraltar, before entering the Moroccan airspace and flying over the port of Tangier.

The solar plane had arrived in Madrid on May 25, from Switzerland, for a scheduled stop, but had been off again since because of the wind. 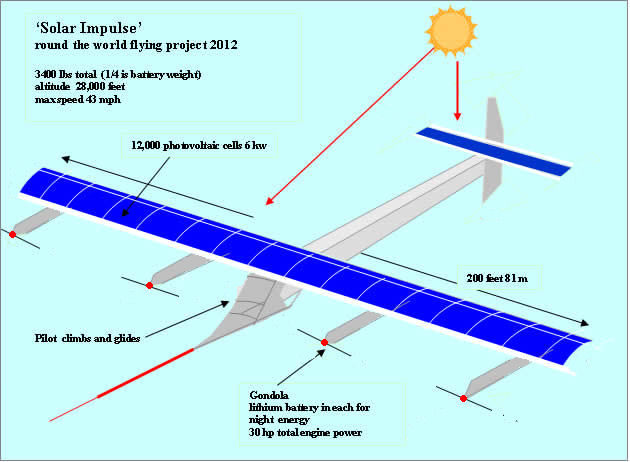 We will leave Europe to come into Africa across the Strait of Gibraltar, bringing a message of support to the Moroccan agency of solar energy, which is preparing a comprehensive solar program, very ambitious for this country, he added driver.

According to the organizers of the flight, it was planned to coincide with the launch of construction of the largest solar thermal plant ever built in Morocco, in the region of Ouarzazate in the south.

The solar plane, then controlled by the co-founder of the project, Switzerland André Borschberg, aged 59, took off on May 24 at Payerne in Switzerland for a journey of 2,500 kilometers in total to Morocco, with a stopover in Madrid .

This is a rehearsal for the world tour of Solar Impulse in 2014.

Seven years of work went to a team of 70 people and 80 partners to build this revolutionary aircraft.

Solar Impulse had entered the history of aviation looping, in July 2010, a first flight of 24 hours without interruption and only powered by its solar panels and batteries.