The astronauts work outside the International Space Station 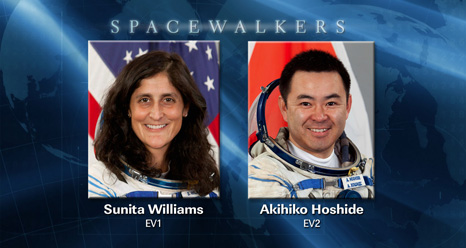 Expedition 32 spacewalkers Sunita Williams and Akihiko Hoshide completed a 8 hour, 17 minute spacewalk on Thursday, the third longest spacewalk ever. After removing and stowing a failed power unit, the spacewalkers had difficulties driving the bolts to secure the replacement switching unit in the s-zero truss.

Williams has conducted 4 previous spacewalks and is wearing a spacesuit bearing red stripes. Hoshide, wearing a spacesuit with no stripes, is conducting his first spacewalk. He is the third Japanese astronaut in history to conduct a spacewalk. The spacewalk is the 164th in support of station assembly and maintenance. This is the first U.S.-based spacewalk since July 2011. 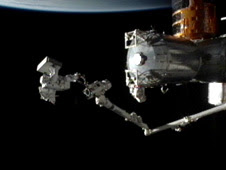 Over the past couple of weeks, Williams and Hoshide completed a variety of tasks in anticipation of the spacewalk including resizing their U.S. extravehicular mobility unit spacesuits, conducting routine spacesuit maintenance, configuring spacewalk equipment and conducting a suited “dry run” check. 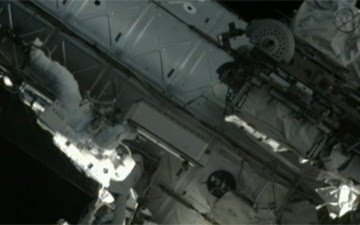 The first Expedition 32 spacewalk was performed by Commander Gennady Padalka and Flight Engineer Yuri Malenchenko on Aug. 20. The primary task during their 5-hour, 51-minute excursion was the move of the Strela-2 cargo boom from the Pirs docking compartment to the Zarya module. Other tasks included the installation of micrometeoroid debris shields on the exterior of the Zvezda service module and the deployment of a small science satellite.

Read about more about the Aug. 20 spacewalk: http://www.nasa.gov/mission_pages/station/expeditions/expedition32/exp32_eva1.html

A camera on the International Space Station captured Hurricane Isaac on Aug. 29 as the orbital laboratory flew over the Texas and Gulf Coast area.