Deep-space missions require precise navigation, in particular when approaching bodies such as Mars, Venus or a comet. How precise?

It’s necessary to pinpoint a spacecraft 100 million kilometres from Earth to within 1 km. To achieve this level of accuracy, ESA experts use ‘quasars’ – the most luminous objects known in the Universe – as beacons in a technique known as Delta-Differential One-Way Ranging, or delta-DOR.

Quasars are fascinating objects that can emit 1000 times the energy of our entire Milky Way galaxy. This prodigious luminosity originates from a region only about the size of our Solar System. They are fuelled by supermassive black holes – which might be billions of times as massive as our Sun – feeding on matter at the centre of their host galaxies. 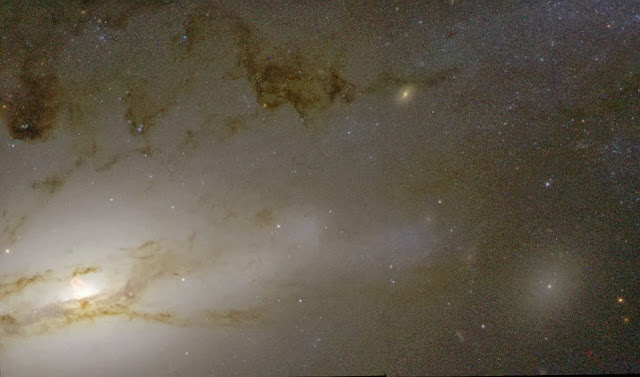 The image above shows one such quasar galaxy, NGC 4438, 50 million light-years from Earth.

Because quasars are extremely bright and distant, they can be used as reference points for spacecraft navigation.

In the delta-DOR technique, radio signals from a spacecraft are received by two separate ground stations, one, say, in New Norcia, Australia and one in Cebreros, Spain, and the difference in the times of arrival is precisely measured.

Next, errors due to the radio signals passing through Earth’s atmosphere are corrected by simultaneously tracking a quasar – the coordinates of which are precisely known.

“For delta-DOR to work, the quasar and the spacecraft should be within 10º as seen from Earth,” says Markus Landgraf, from ESA’s Mission Analysis team.

“There are around 200 000 quasars known in the Sloan Digital Sky Survey, and almost any of them are potential candidates to be used in delta-DOR tracking.”

Once the location of the spacecraft derived from the ground stations is compared to the known location of the quasar, engineers can apply corrections, delivering a significantly more accurate fix on its position.

“Quasar locations define a reference system. They enable engineers to improve the precision of the measurements taken by ground stations and improve the accuracy of the direction to the spacecraft to an order of a millionth of a degree,” says Frank Budnik, a flight dynamics expert at ESA.

Using the results of the delta-DOR processing together with the range and Doppler measurements, which are also derived from the spacecraft signals received on ground, ESA can achieve an accuracy in spacecraft location of just several hundred metres at a distance of 100 000 000 km.