First Moments of a Solar Flare in Different Wavelengths of Light 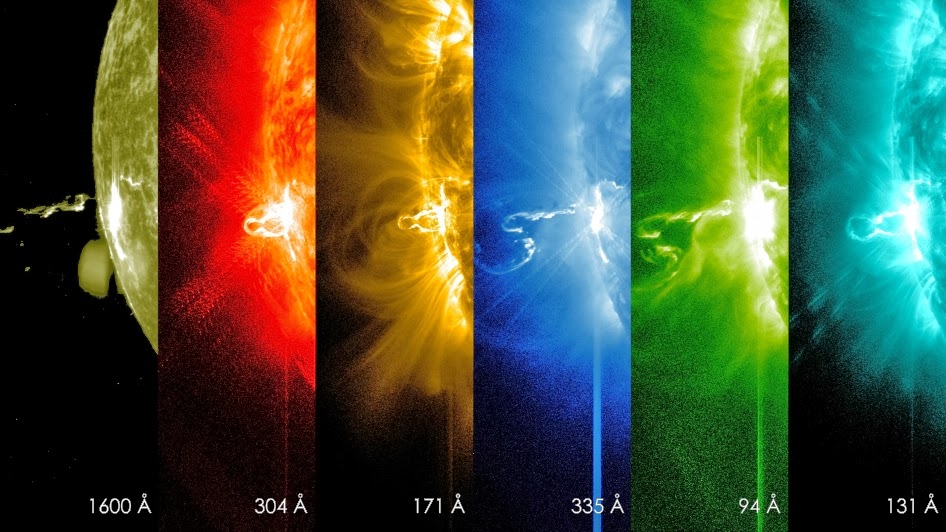 On Feb. 24, 2014, the sun emitted a significant solar flare, peaking at 7:49 p.m. EST. NASA's Solar Dynamics Observatory (SDO), which keeps a constant watch on the sun, captured images of the event. These SDO images from 7:25 p.m. EST on Feb. 24 show the first moments of this X-class flare in different wavelengths of light -- seen as the bright spot that appears on the left limb of the sun. Hot solar material can be seen hovering above the active region in the sun's atmosphere, the corona.

Solar flares are powerful bursts of radiation, appearing as giant flashes of light in the SDO images. Harmful radiation from a flare cannot pass through Earth's atmosphere to physically affect humans on the ground, however -- when intense enough -- they can disturb the atmosphere in the layer where GPS and communications signals travel.

Video above: When a solar filament above the Sun's surface (the darker, slanted line seen before the eruption)) became unstable and erupted, it briefly left an empty channel that was almost immediately followed by a series magnetic loops reconnecting (Feb. 18, 2014) over the channel. The action was caught in this combination of two wavelengths of extreme ultraviolet light (AIA 171 and AIA 304). This kind of channel eruption is not rare, but not usually observed so clearly. Still image was taken at 2:17 UT. Credit: Solar Dynamics Observatory/NASA.