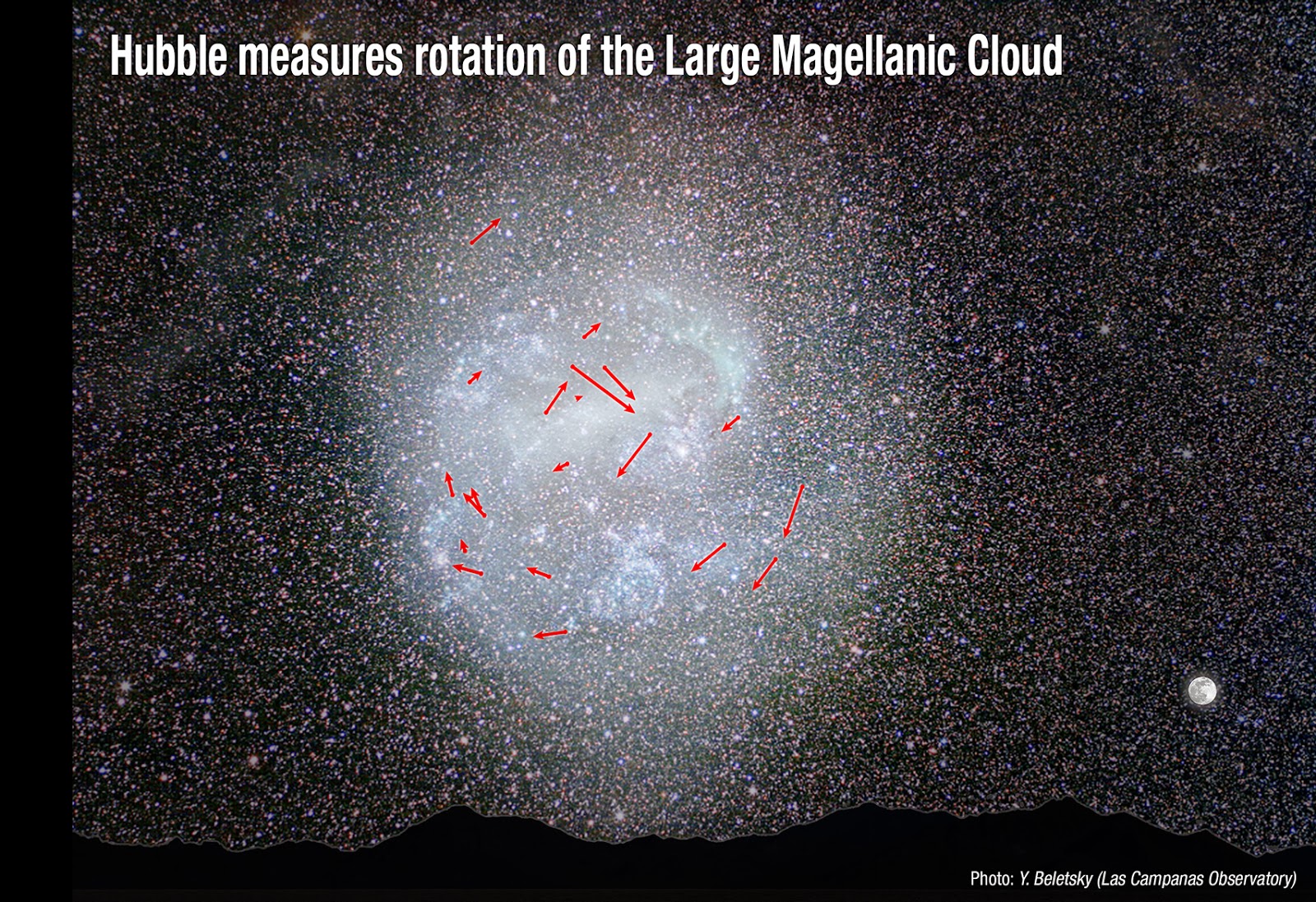 Image above: This artist’s illustration shows Hubble measurements of the rotation of the Large Magellanic Cloud (LMC), the nearest normal-sized galaxy to our Milky Way. The LMC appears in the southern-hemisphere night sky, as seen in this ground-based image. Image Credit: NASA/ESA.

Using the sharp-eyed NASA Hubble Space Telescope, astronomers have for the first time precisely measured the rotation rate of a galaxy based on the clock-like movement of its stars.

According to their analysis, the central part of the neighboring galaxy, called the Large Magellanic Cloud (LMC), completes a rotation every 250 million years. It takes our sun the same amount of time to complete a rotation around the center of our Milky Way galaxy.

The Hubble team -- Roeland van der Marel of the Space Telescope Science Institute in Baltimore, Md., and Nitya Kallivayalil of the University of Virginia in Charlottesville, Va. -- used Hubble to measure the average motion of hundreds of individual stars in the LMC, located 170,000 light-years away. Hubble recorded the stars' slight movements during a seven-year period.

"Studying this nearby galaxy by tracking the stars' movements gives us a better understanding of the internal structure of disk galaxies," said Kallivayalil, "Knowing a galaxy's rotation rate offers insight into how a galaxy formed, and it can be used to calculate its mass."

Disk-shaped galaxies such as the Milky Way and the LMC generally rotate like a carousel. Hubble's precision tracking offers a new way to determine a galaxy's rotation by the "sideways" proper motion of its stars, as seen in the plane of the sky. Astronomers have long measured the sideways motions of nearby celestial objects, but this is the first time the precision has become sufficient to see another distant galaxy rotate.

"The LMC is a very important galaxy because it is very near to our Milky Way," said van der Marel, who is the lead author on a paper in the Feb. 1 issue of the Astrophysical Journal. "Studying the Milky Way is difficult because you're studying from the inside, so everything you see is spread all over the sky. It's all at different distances, and you're sitting in the middle of it. Studying structure and rotation is much easier if you view a nearby galaxy from the outside."

For the past century, astronomers have calculated galaxy rotation rates by observing a slight shift in the spectrum of its starlight. This shift is known as the Doppler Effect. On one side of a galaxy's spinning stellar disk, the stars swinging in the direction of Earth will show a spectral blueshift -- the compression of light waves due to motion toward the observer. Stars swinging away from Earth on the opposite side of a galaxy will show a spectral redshift -- the stretching of light to redder wavelengths due to motion away from the observer.

The newly measured Hubble motions and the Doppler motions measured previously provide complementary information about the LMC's rotation rate. By combining the results, the Hubble team obtained a fully three-dimensional view of stellar motions in another galaxy.

"By using Hubble to study the stars' motions over several years, we can actually, for the first time, see a galaxy rotate in the plane of the sky," said van der Marel.

Hubble is the only telescope that can make this kind of observation because of its sharp resolution, its image stability, and its 24 years in space. 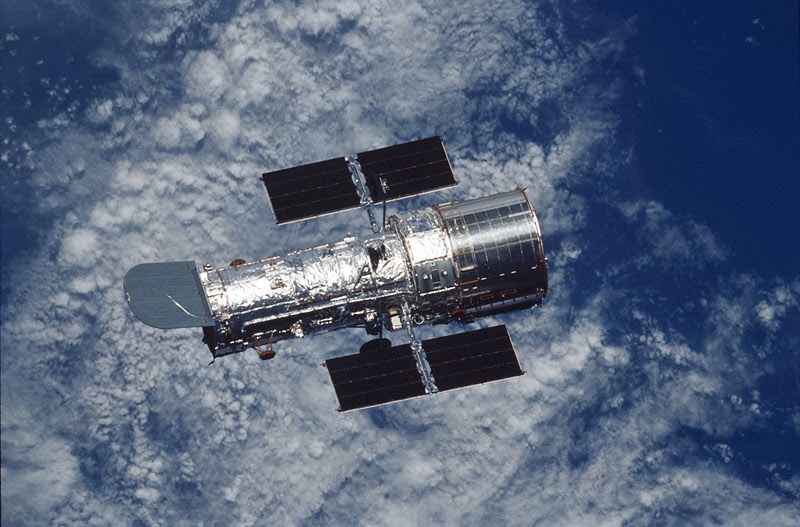 "If we imagine a human on the moon, Hubble's precision would allow us to determine the speed at which the person's hair grows," van der Marel explained. "This precision is crucial, because the apparent stellar motions are so small because of the galaxy's distance. You can think of the LMC as a clock in the sky, on which the hands take 250 million years to make one revolution. We know the clock's hands move, but even with Hubble we need to stare at them for several years to see any movement."

The research team used Hubble's Wide Field Camera 3 and Advanced Camera for Surveys to observe stars in 22 fields spread across the vast disk of the LMC, which appears in the southern night sky as an object about 20 times the diameter of the moon. Arrows on the accompanying image show the predicted motion over the next 7 million years, based on the Hubble measurements.

Each observed field contains not only dozens of LMC stars, but also a background quasar, a brilliant beacon of light powered by a black hole in the core of the distant active galaxy. The astronomers used the quasars as fixed reference points to measure the subtle motion of the LMC stars.

This measurement is the culmination of ongoing work with Hubble to refine the calculation of the LMC's rotation rate. Van der Marel began analyzing the galaxy's rotation in 2002 by creating detailed predictions, now confirmed by Hubble, of what the rotation should look like.

"Because the LMC is nearby, it is a benchmark for studies of stellar evolution and populations," Kallivayalil said. "For this, it's important to understand the galaxy's structure. Our technique for measuring the galaxy's rotation rate using fully three-dimensional motions is a new way to shed light on that structure. It opens a new window to our understanding of how stars in galaxies move."

The team next plans to use Hubble to measure the stellar motions in the LMC's diminutive cousin, the Small Magellanic Cloud, using the same technique. The galaxies are interacting, and that study should also yield improved insight into how the galaxies are moving around each other and around the Milky Way.

For a graphic and video illustration of these results, visit: http://hubblesite.org/news/2014/11