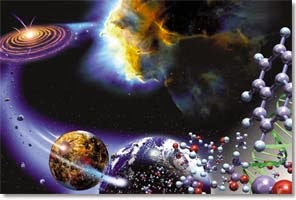 A team of scientists at NASA's Johnson Space Center in Houston and the Jet Propulsion Laboratory in Pasadena, Calif., has found evidence of past water movement throughout a Martian meteorite, reviving debate in the scientific community over life on Mars.

In 1996, a group of scientists at Johnson led by David McKay, Everett Gibson and Kathie Thomas-Keprta published an article in Science announcing the discovery of biogenic evidence in the Allan Hills 84001(ALH84001) meteorite. In this new study, Gibson and his colleagues focused on structures deep within a 30-pound (13.7-kilogram) Martian meteorite known as Yamato 000593 (Y000593). The team reports that newly discovered different structures and compositional features within the larger Yamato meteorite suggest biological processes might have been at work on Mars hundreds of millions of years ago.

The team's findings have been published in the February issue of the journal Astrobiology. The lead author, Lauren White, is based at the Jet Propulsion Laboratory. Co-authors are Gibson, Thomas-Keprta, Simon Clemett and McKay, all based at Johnson. McKay, who led the team that studied the ALH84001 meteorite, died a year ago. 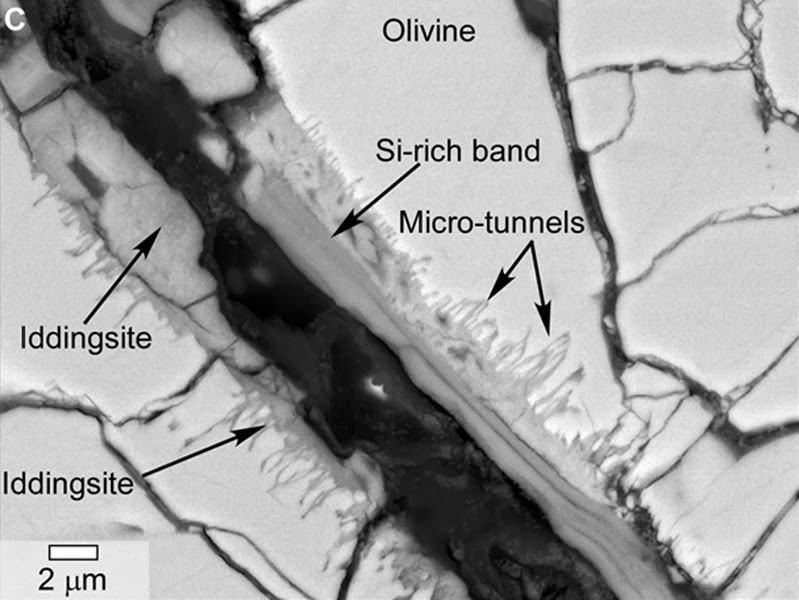 Microtunnels in Yamato Meteorite From Mars

Image above: This scanning electron microscope image of a polished thin section of a meteorite from Mars shows tunnels and curved microtunnels. Image Credit: NASA.

"While robotic missions to Mars continue to shed light on the planet's history, the only samples from Mars available for study on Earth are Martian meteorites," said White. "On Earth, we can utilize multiple analytical techniques to take a more in-depth look into meteorites and shed light on the history of Mars. These samples offer clues to the past habitability of this planet. As more Martian meteorites are discovered, continued research focusing on these samples collectively will offer deeper insight into attributes which are indigenous to ancient Mars. Furthermore, as these meteorite studies are compared to present day robotic observations on Mars, the mysteries of the planet's seemingly wetter past will be revealed."

Analyses found that the rock was formed about 1.3 billion years ago from a lava flow on Mars. Around 12 million years ago, an impact occurred on Mars which ejected the meteorite from the surface of Mars. The meteorite traveled through space until it fell in Antarctica about 50,000 years ago.

The rock was found on the Yamato Glacier in Antarctica by the Japanese Antarctic Research Expedition in 2000. The meteorite was classified as a nakhlite, a subgroup of Martian meteorites. Martian meteoritic material is distinguished from other meteorites and materials from Earth and the moon by the composition of the oxygen atoms within the silicate minerals and trapped Martian atmospheric gases.

The second set of features consists of nanometer- to-micrometer-sized spherules that are sandwiched between layers within the rock and are distinct from carbonate and the underlying silicate layer. Similar spherical features have been previously seen in the Martian meteorite Nakhla that fell in 1911 in Egypt. Composition measurements of the Y000593 spherules show that they are significantly enriched in carbon compared to the nearby surrounding iddingsite layers.

A striking observation is that these two sets of features in Y000593, recovered from Antarctica after about 50,000 years residence time, are similar to features found in Nakhla, an observed fall collected shortly after landing. 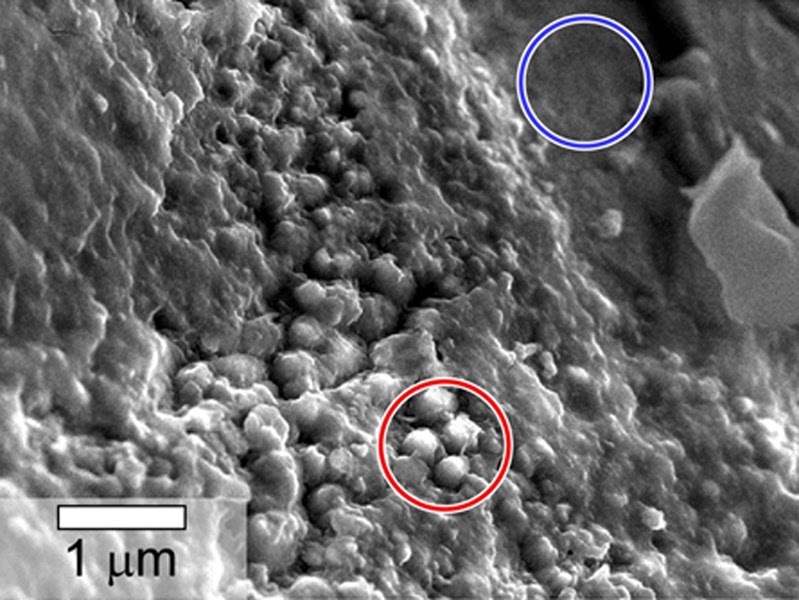 Image above: This scanning electron microscope image shows spheroidal features embedded in a layer of iddingsite, a mineral formed by action of water, in a meteorite that came from Mars. Image Credit: NASA.

The authors note that they cannot exclude the possibility that the carbon-rich regions in both sets of features may be the product of abiotic mechanisms: however, textural and compositional similarities to features in terrestrial samples, which have been interpreted as biogenic, imply the intriguing possibility that the Martian features were formed by biotic activity.

"The unique features displayed within the Martian meteorite Yamato 000593 are evidence of aqueous alterations as seen in the clay minerals and the presence of carbonaceous matter associated with the clay phases which show that Mars has been a very active body in its past," said Gibson. "The planet is revealing the presence of an active water reservoir that may also have a significant carbon component.

"The nature and distribution of Martian carbon is one of the major goals of the Mars Exploration Program. Since we have found indigenous carbon in several Mars meteorites, we cannot overstate the importance of having Martian samples available to study in earth-based laboratories. Furthermore, the small sizes of the carbonaceous features within the Yamato 000593 meteorite present major challenges to any analyses attempted by remote techniques on Mars," Gibson added.

"This is no smoking gun," said JPL's White. "We can never eliminate the possibility of contamination in any meteorite. But these features are nonetheless interesting and show that further studies of these meteorites should continue."