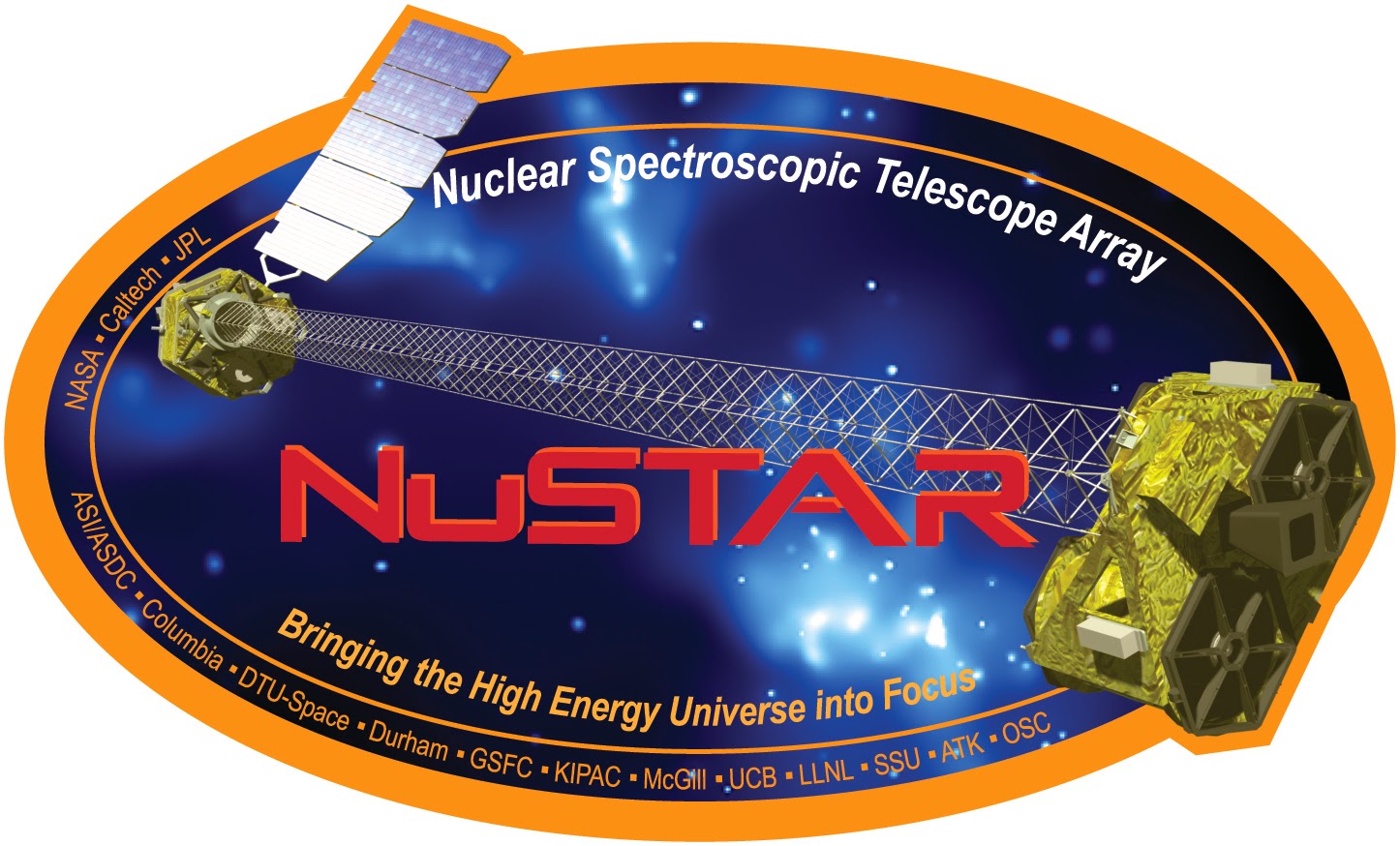 Video above: NuSTAR is showing that exploding stars slosh around before blasting apart.This 3-D computer simulation demonstrates how the supernova explosion might look. Video Credit: NASA/JPL-Caltech.

One of the biggest mysteries in astronomy, how stars blow up in supernova explosions, finally is being unraveled with the help of NASA's Nuclear Spectroscopic Telescope Array (NuSTAR).

The high-energy X-ray observatory has created the first map of radioactive material in a supernova remnant. The results, from a remnant named Cassiopeia A (Cas A), reveal how shock waves likely rip massive dying stars apart. 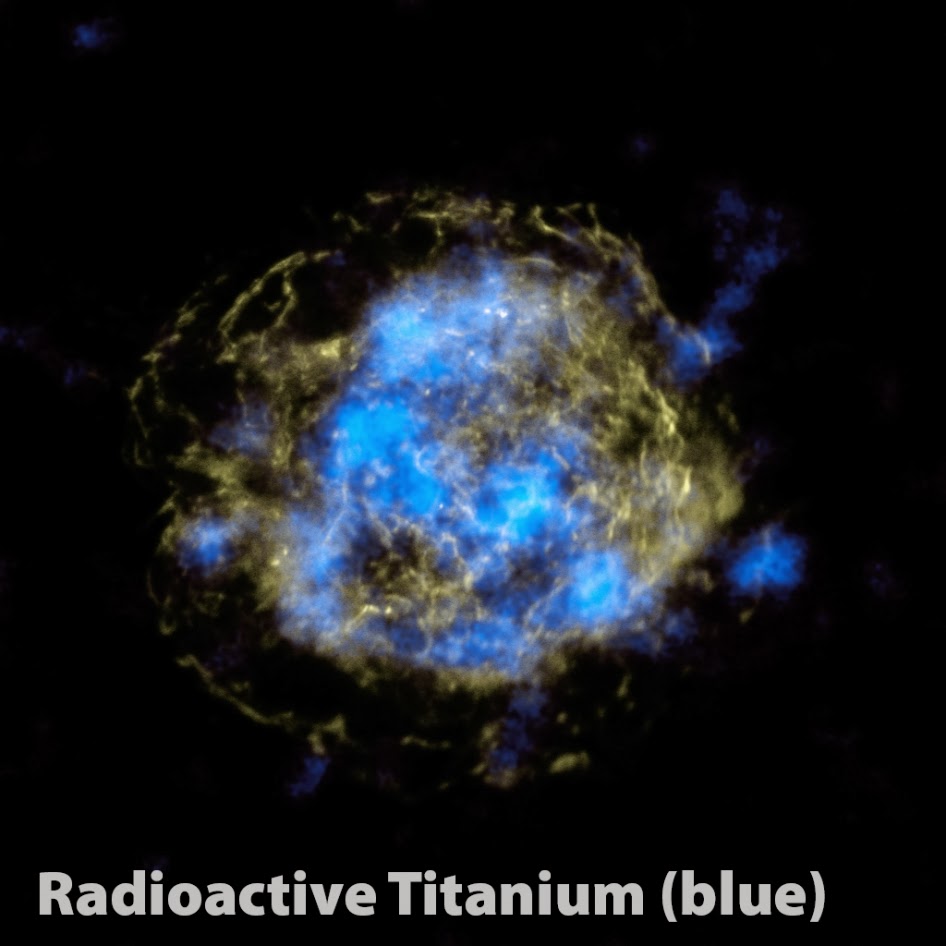 Radioactive Core of a Dead Star

Image above: NASA's Nuclear Spectroscope Telescope Array, or NuSTAR, has, for the first time, imaged the radioactive "guts" of a supernova remnant, the leftover remains of a star that exploded. The NuSTAR data are blue, and show high-energy X-rays. Yellow shows non-radioactive material detected previously by NASA's Chandra X-ray Observatory in low-energy X-rays. Image credit: NASA/JPL-Caltech/CXC/SAO.

"Stars are spherical balls of gas, and so you might think that when they end their lives and explode, that explosion would look like a uniform ball expanding out with great power," said Fiona Harrison, the principal investigator of NuSTAR at the California Institute of Technology (Caltech) in Pasadena. "Our new results show how the explosion's heart, or engine, is distorted, possibly because the inner regions literally slosh around before detonating."

Harrison is a co-author of a paper about the results appearing in the Feb. 20 issue of Nature. 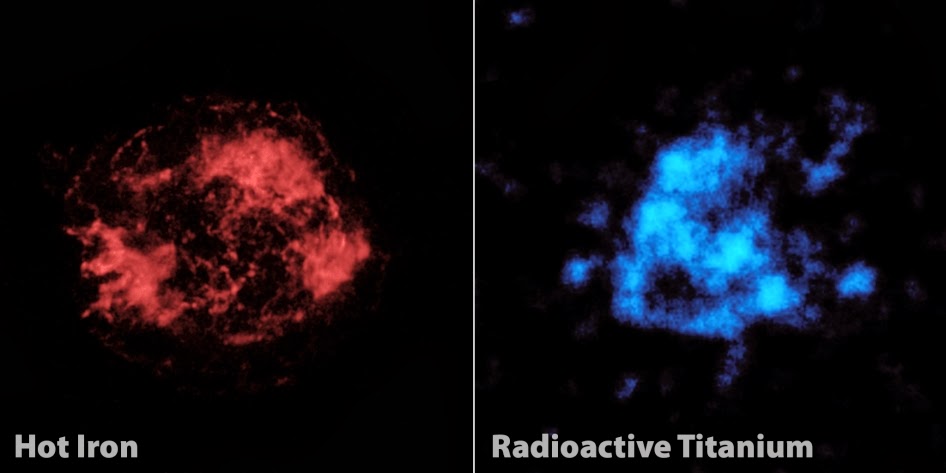 The Case of Missing Iron in Cassiopeia A

Image above: When astronomers first looked at images of a supernova remnant called Cassiopeia A, captured by NASA's Nuclear Spectroscopic Telescope Array, or NuSTAR, they were shocked. What they saw didn't match previous observations. The mystery of Cassiopeia A (Cas A), a massive star that exploded in a supernova more than 11,000 years ago, continues to confound researchers. Image credit: NASA/JPL-Caltech/CXC/SAO.

Cas A was created when a massive star blew up as a supernova leaving a dense stellar corpse and its ejected remains. The light from the explosion reached Earth a few hundred years ago, so we are seeing the stellar remnant when it was fresh and young.

Supernovas seed the universe with many elements, including the gold in jewelry, the calcium in bones and the iron in blood. While small stars like our sun die less violent deaths, stars at least eight times as massive as our sun blow up in supernova explosions. The high temperatures and particles created in the blast fuse light elements together to create heavier elements. 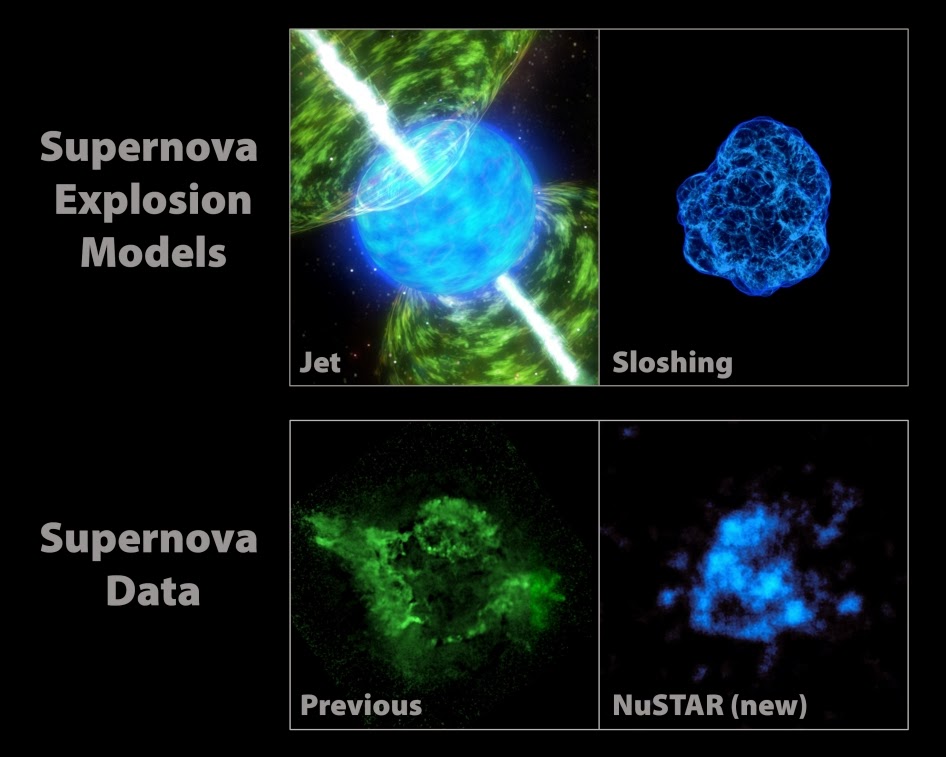 Images above: How massive stars blow up in powerful explosions called supernovas remains a mystery. Theorists have come up with computer simulations to try to recreate what happens, but it's not clear which model is correct. Now, new observations from NASA's Nuclear Spectroscopic Telescope Array of the heart of the Cassiopeia supernova remnant are allowing researchers to test those models with real evidence. Image credit: NASA/JPL-Caltech/CXC/SAO/SkyWorks Digital/Christian Ott.

NuSTAR is the first telescope capable of producing maps of radioactive elements in supernova remnants. In this case, the element is titanium-44, which has an unstable nucleus produced at the heart of the exploding star. 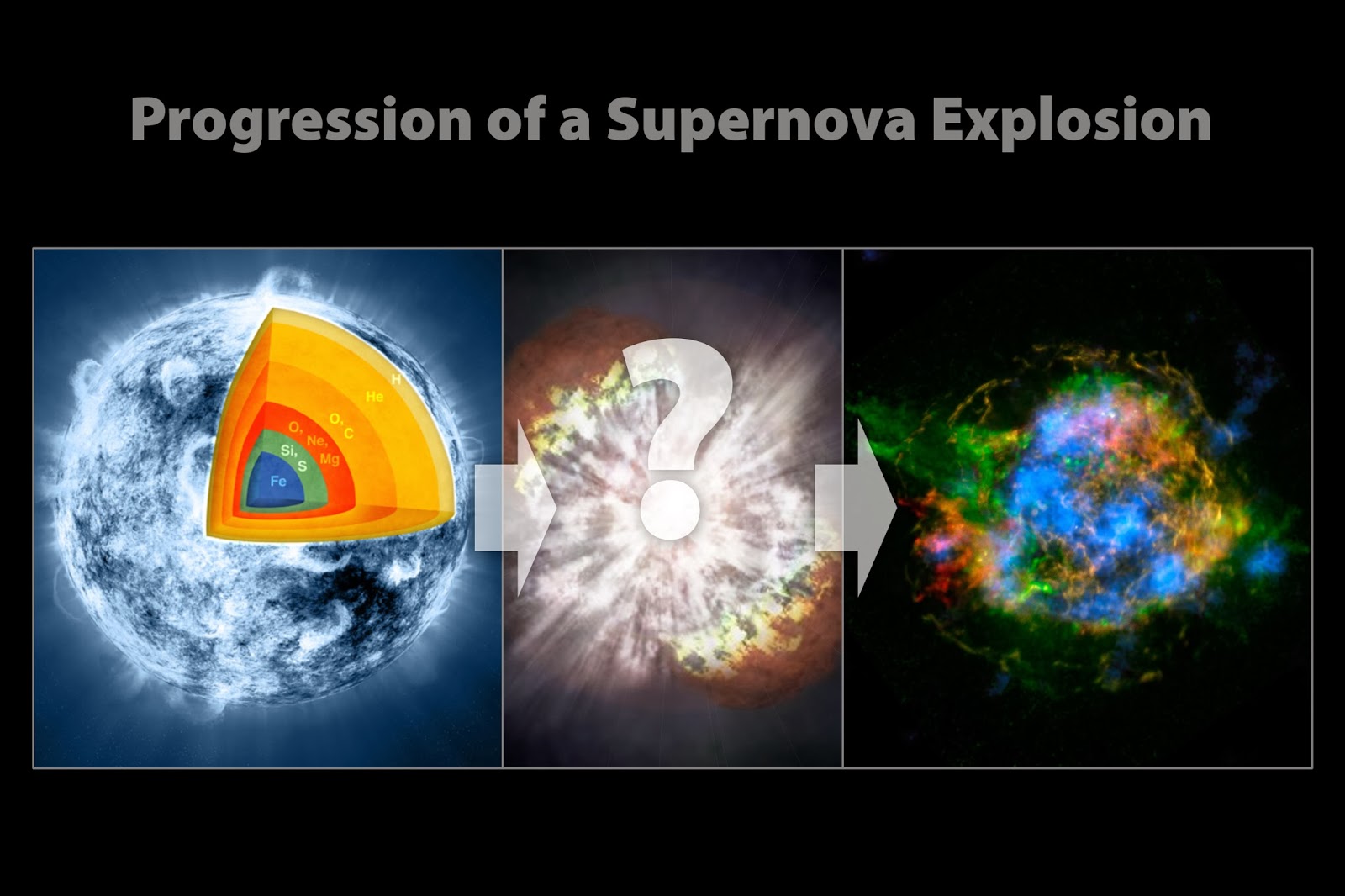 Image above: These illustrations show the progression of a supernova blast. A massive star (left), which has created elements as heavy as iron in its interior, blows up in a tremendous explosion (middle), scattering its outer layers in a structure called a supernova remnant (right). Image Credit: NASA/CXC/SAO/JPL-Caltech.

The NuSTAR map of Cas A shows the titanium concentrated in clumps at the remnant's center and points to a possible solution to the mystery of how the star met its demise. When researchers simulate supernova blasts with computers, as a massive star dies and collapses, the main shock wave often stalls out and the star fails to shatter.

The latest findings strongly suggest the exploding star literally sloshed around, re-energizing the stalled shock wave and allowing the star to finally blast off its outer layers. 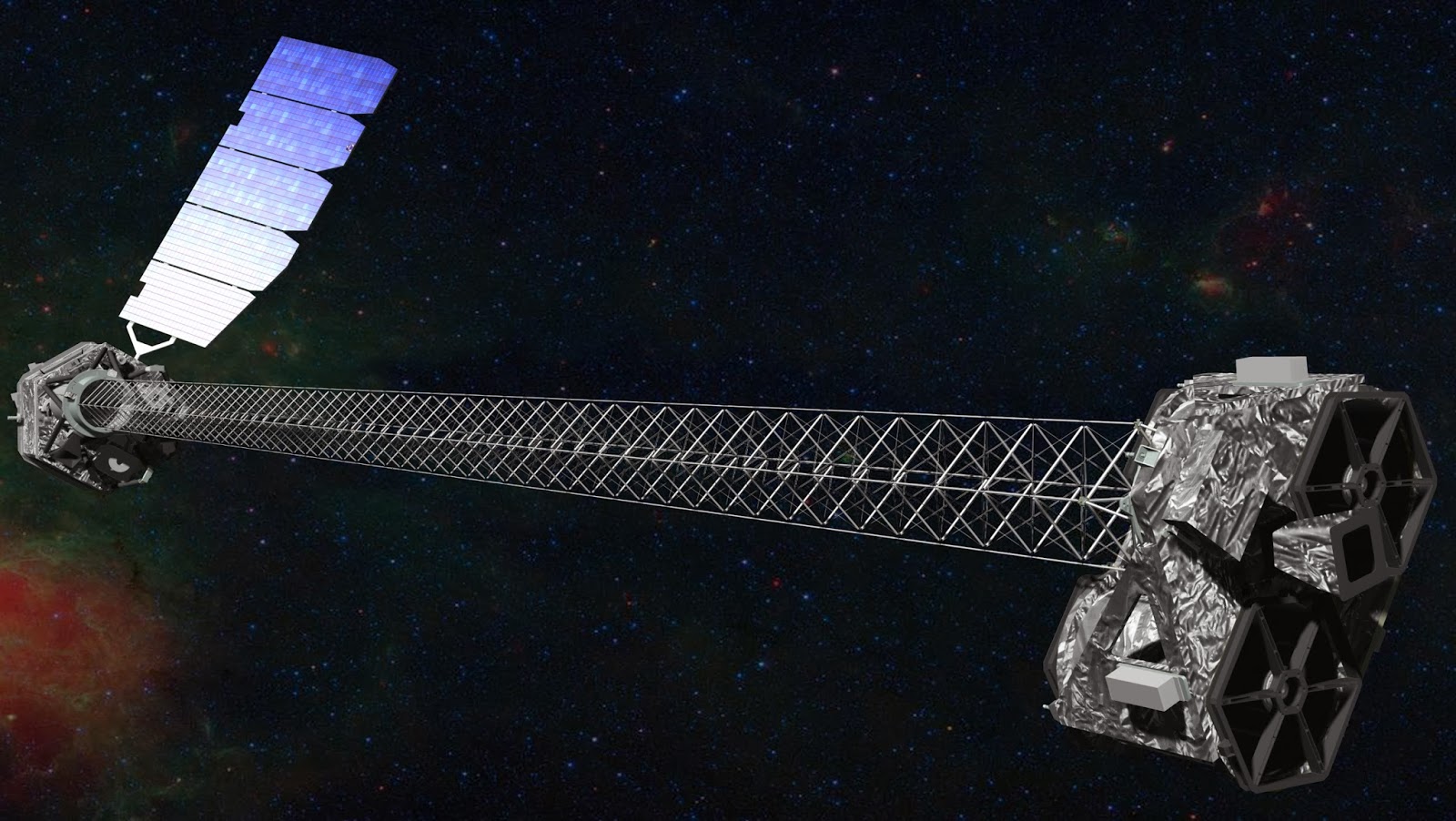 Image above: Artist's concept of NuSTAR on orbit. NuSTAR has a 10-m (30') mast that deploys after launch to separate the optics modules (right) from the detectors in the focal plane (left). Image Credit: NASA/JPL-Caltech.

"With NuSTAR we have a new forensic tool to investigate the explosion," said the paper's lead author, Brian Grefenstette of Caltech. "Previously, it was hard to interpret what was going on in Cas A because the material that we could see only glows in X-rays when it's heated up. Now that we can see the radioactive material, which glows in X-rays no matter what, we are getting a more complete picture of what was going on at core of the explosion."

The NuSTAR map also casts doubt on other models of supernova explosions, in which the star is rapidly rotating just before it dies and launches narrow streams of gas that drive the stellar blast. Though imprints of jets have been seen before around Cas A, it was not known if they were triggering the explosion. NuSTAR did not see the titanium, essentially the radioactive ash from the explosion, in narrow regions matching the jets, so the jets were not the explosive trigger. 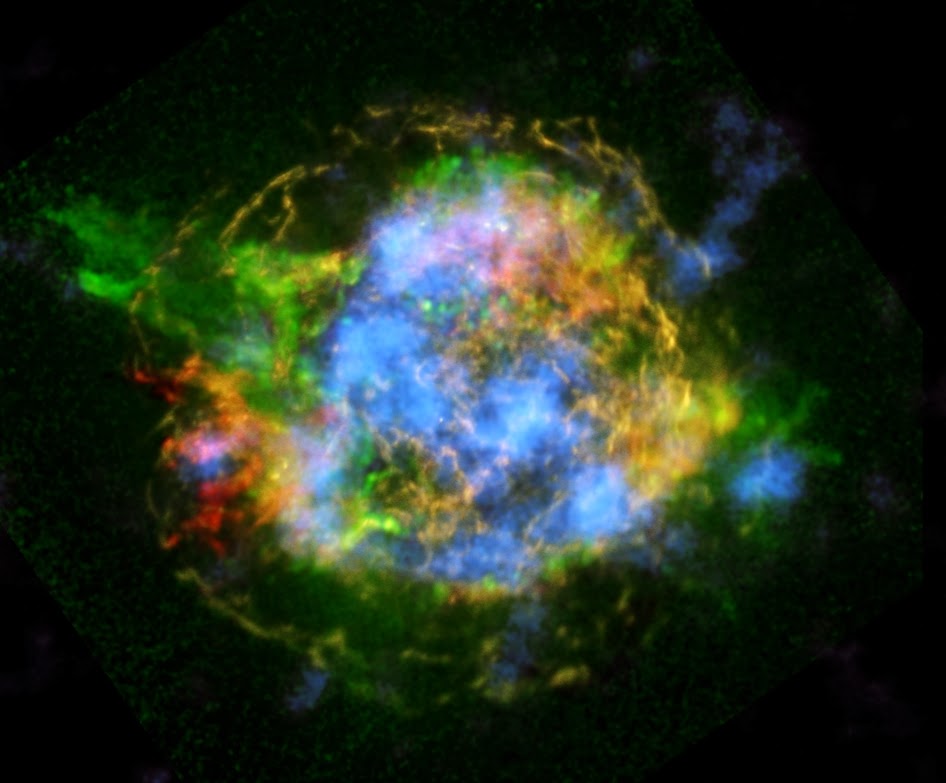 Untangling the Remains of Cassiopeia A

Image above: The mystery of how Cassiopeia A exploded is unraveling thanks to new data from NASA's Nuclear Spectroscopic Telescope Array, or NuSTAR. In this image, NuSTAR data, which show high-energy X-rays from radioactive material, are colored blue. Lower-energy X-rays from non-radioactive material, imaged previously with NASA's Chandra X-ray Observatory, are shown in red, yellow and green. Image credit: NASA/JPL-Caltech/CXC/SAO.

"This is why we built NuSTAR," said Paul Hertz, director of NASA's astrophysics division in Washington. "To discover things we never knew – and did not expect – about the high-energy universe."

The researchers will continue to investigate the case of Cas A's dramatic explosion. Centuries after its death marked our skies, this supernova remnant continues to perplex.

For more information about NuSTAR and images, visit: http://www.nasa.gov/nustar