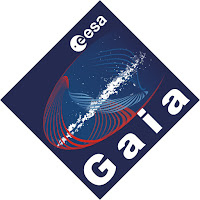 After launch on 19 December 2013 and a six-month long in-orbit commissioning period, the satellite started routine scientific operations on 25 July 2014. Located at the Lagrange point L2, 1.5 million km from Earth, Gaia surveys stars and many other astronomical objects as it spins, observing circular swathes of the sky. By repeatedly measuring the positions of the stars with extraordinary accuracy, Gaia can tease out their distances and motions through the Milky Way galaxy. 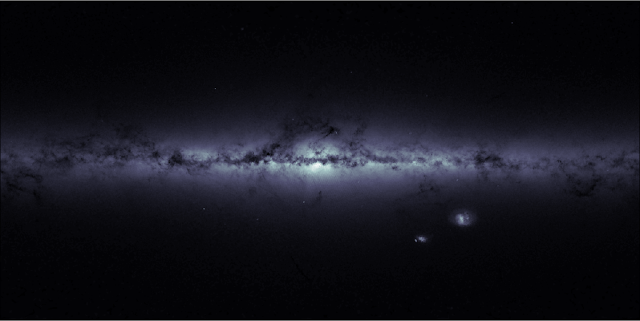 For the first 28 days, Gaia operated in a special scanning mode that sampled great circles on the sky, but always including the ecliptic poles. This meant that the satellite observed the stars in those regions many times, providing an invaluable database for Gaia’s initial calibration.

At the end of that phase, on 21 August 2014, Gaia commenced its main survey operation, employing a scanning law designed to achieve the best possible coverage of the whole sky.

Since the start of its routine phase, the satellite recorded 272 billion positional or astrometric measurements 54.4 billion brightness or photometric data points, and 5.4 billion spectra.

The Gaia team have spent a busy year processing and analysing these data, en route towards the development of Gaia’s main scientific products, consisting of enormous public catalogues of the positions, distances, motions and other properties of more than a billion stars. Because of the immense volumes of data and their complex nature, this requires a huge effort from expert scientists and software developers distributed across Europe, combined in Gaia’s Data Processing and Analysis Consortium (DPAC).

“The past twelve months have been very intense, but we are getting to grips with the data, and are looking forward to the next four years of nominal operations,” says Timo Prusti, Gaia project scientist at ESA.

“We are just a year away from Gaia's first scheduled data release, an intermediate catalogue planned for the summer of 2016. With the first year of data in our hands, we are now halfway to this milestone, and we’re able to present a few preliminary snapshots to show that the spacecraft is working well and that the data processing is on the right track.” 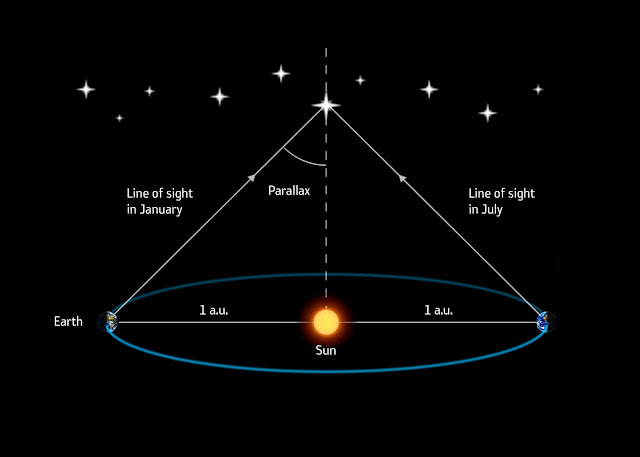 As one example of the ongoing validation, the Gaia team has been able to measure the parallax for an initial sample of two million stars.

Parallax is the apparent motion of a star against a distant background observed over the period of a year and resulting from the Earth's real motion around the Sun; this is also observed by Gaia as it orbits the Sun alongside Earth. But parallax is not the only movement seen by Gaia: the stars are also really moving through space, which is called proper motion.

Gaia has made an average of roughly 14 measurements of each star on the sky thus far, but this is generally not enough to disentangle the parallax and proper motions.

To overcome this, the scientists have combined Gaia data with positions extracted from the Tycho-2 catalogue, based on data taken between 1989 and 1993 by Gaia's predecessor, the Hipparcos satellite.

This restricts the sample to just two million out of the more than one billion that Gaia has observed so far, but yields some useful early insights into the quality of its data.

The nearer a star is to the Sun, the larger its parallax, and thus the parallax measured for a star can be used to determine its distance. In turn, the distance can be used to convert the apparent brightness of the star into its true brightness or ‘absolute luminosity’. 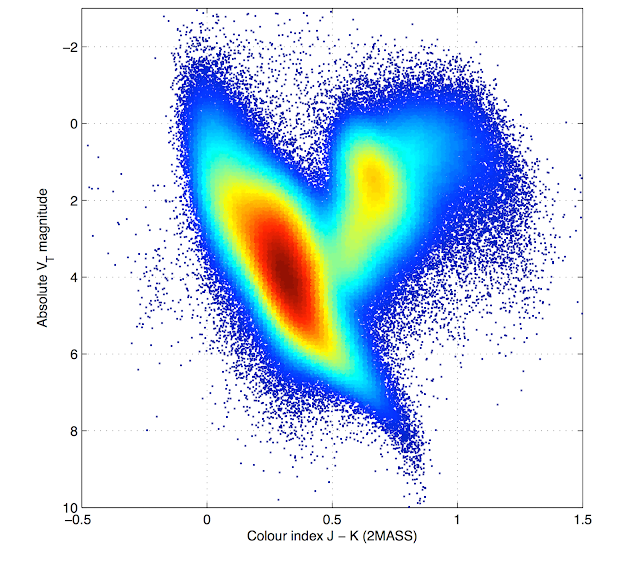 Astronomers plot the absolute luminosities of stars against their temperatures – which are estimated from the stars' colours – to generate a ‘Hertzsprung-Russell diagram’, named for the two early 20th century scientists who recognised that such a diagram could be used as a tool to understand stellar evolution.

“Our first Hertzsprung-Russell diagram, with absolute luminosities based on Gaia’s first year and the Tycho-2 catalogue, and colour information from ground-based observations, gives us a taste of what the mission will deliver in the coming years,” says Lennart Lindegren, professor at the University of Lund and one of the original proposers of the Gaia mission.

As Gaia has been conducting its repeated scans of the sky to measure the motions of stars, it has also been able to detect whether any of them have changed their brightness, and in doing so, has started to discover some very interesting astronomical objects.

Gaia has detected hundreds of transient sources so far, with a supernova being the very first on 30 August 2014. These detections are routinely shared with the community at large as soon as they are spotted in the form of ‘Science Alerts’, enabling rapid follow-up observations to be made using ground-based telescopes in order to determine their nature.

One transient source was seen undergoing a sudden and dramatic outburst that increased its brightness by a factor of five. It turned out that Gaia had discovered a so-called ‘cataclysmic variable’, a system of two stars in which one, a hot white dwarf, is devouring mass from a normal stellar companion, leading to outbursts of light as the material is swallowed. The system also turned out to be an eclipsing binary, in which the relatively larger normal star passes directly in front of the smaller, but brighter white dwarf, periodically obscuring the latter from view as seen from Earth.

Unusually, both stars in this system seem to have plenty of helium and little hydrogen. Gaia’s discovery data and follow-up observations may help astronomers to understand how the two stars lost their hydrogen. 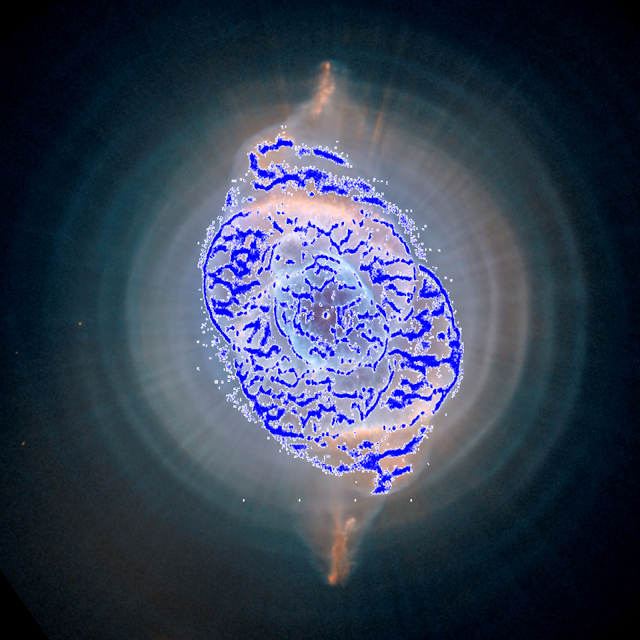 Gaia has also discovered a multitude of stars whose brightness undergoes more regular changes over time. Many of these discoveries were made between July and August 2014, as Gaia performed many subsequent observations of a few patches of the sky close to the ecliptic poles. This closely sampled sequence of observations made it possible to find and study variable stars located in these regions.

Located close to the south ecliptic pole is the famous Large Magellanic Cloud (LMC), a dwarf galaxy and close companion of our own galaxy, the Milky Way. Gaia has delivered detailed light curves for dozens of RR Lyrae type variable stars in the LMC, and the fine details revealed in them testify to the very high quality of the data.

Another curious object covered during the same mission phase is the Cat’s Eye Nebula, a planetary nebula also known as NGC 6543, which lies close to the north ecliptic pole.

Planetary nebulae are formed when the outer layers of an aging low-mass star are ejected and interact with the surrounding interstellar medium, leaving behind a compact white dwarf. Gaia made over 200 observations of the Cat’s Eye Nebula, and registered over 84 000 detections that accurately trace out the intricate gaseous filaments that such objects are famous for. As its observations continue, Gaia will be able to see the expansion of the nebular knots in this and other planetary nebulae.

Closer to home, Gaia has detected a wealth of asteroids, the small rocky bodies that populate our solar system, mainly between the orbits of Mars and Jupiter. Because they are relatively nearby and orbiting the Sun, asteroids appear to move against the stars in astronomical images, appearing in one snapshot of a given field, but not in images of the same field taken at later times.

Gaia scientists have developed special software to look for these ‘outliers’, matching them with the orbits of known asteroids in order to remove them from the data being used to study stars. But in turn, this information will be used to characterise known asteroids and to discover thousands of new ones.

Finally, in addition to the astrometric and photometric measurements being made by Gaia, it has been collecting spectra for many stars. The basic use of these data is to determine the motions of the stars along the line-of-sight by measuring slight shifts in the positions of absorption lines in their spectra due to the Doppler shift. But in the spectra of some hot stars, Gaia has also seen absorption lines from gas in foreground interstellar material, which will allow the scientists to measure its distribution.

“These early proof-of-concept studies demonstrate the quality of the data collected with Gaia so far and the capabilities of the processing pipeline. The final data products are not quite ready yet, but we are working hard to provide the first of them to the community next year. Watch this space,” concludes Timo.

Gaia is an ESA mission to survey one billion stars in our galaxy and local galactic neighbourhood in order to build the most precise 3D map of the Milky Way and answer questions about its origin and evolution.

The mission’s primary scientific product will be a catalogue with the positions, motions, brightnesses, and colours of the surveyed stars. An intermediate version of the catalogue will be released in 2016. In the meantime, Gaia's observing strategy, with repeated scans of the entire sky, is allowing the discovery and measurement of many transient events across the sky, which are shared with the community at large in the form of Science Alerts.

The nature of the Gaia mission leads to the acquisition of an enormous quantity of complex, extremely precise data, and the data-processing challenge is a huge task in terms of expertise, effort and dedicated computing power. A large pan-European team of expert scientists and software developers, the Data Processing and Analysis Consortium (DPAC), located in and funded by many ESA member states, is responsible for the processing and validation of Gaia's data, with the final objective of producing the Gaia Catalogue. Scientific exploitation of the data will only take place once they are openly released to the community.

How many stars are there in the Universe?: http://orbiterchspacenews.blogspot.ch/2015/07/counting-stars-with-gaia.html