Footprints of a martian flood

Water has left its mark in a variety of ways in this martian scene captured by ESA’s Mars Express.

The region lies on the western rim of an ancient large impact basin, as seen in the context map. The image shows the western part of the Arda Valles, a dendritic drainage system 260 km north of Holden Crater and close to Ladon Valles. 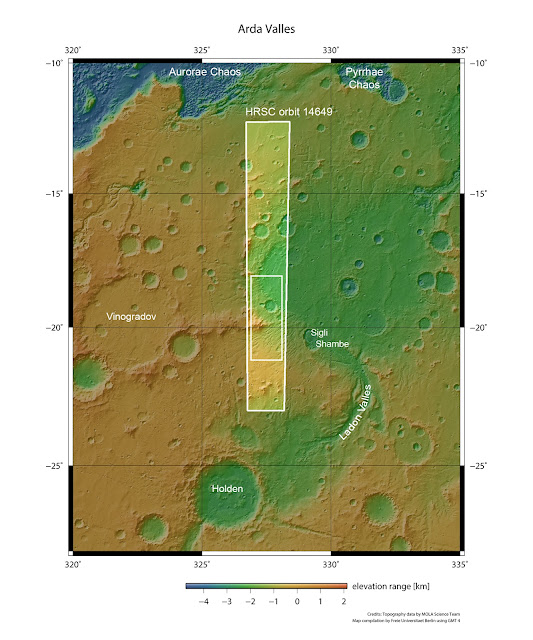 Vast volumes of water once flowed from the southern highlands, carving Ladon Valles and ponding in the large Ladon Basin seen in this image.

The plan views show the striking dendritic drainage pattern of the valleys (left). Many contributing streams merge into tributaries of the main channels before flowing down into the smooth-floored impact basin towards the right.

In the upper centre of the main image – also clearly identified in the topography and anaglyph images – a large mound is seen with an 8.5 km-wide impact crater at its foot. The mound is possibly the remnant of an older impact basin but may also have been influenced by sediments transported by the surrounding streams, building up a fan deposit.

In the centre right of the image, a large 25 km-wide impact crater has also been filled by thick muddy sediments that later collapsed into the chaotic terrain seen in the crater floor. The jumbled nodules in the crater rim probably indicate the former level of the infilling sediments. 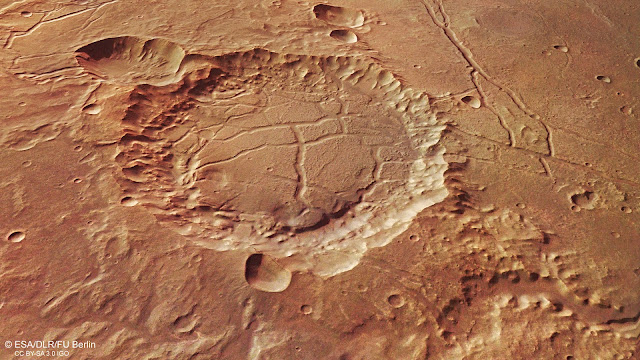 To the top right of the scene, the surface has also broken up into a number of giant polygons, likely linked to the loss of underground ice and the slow evaporation of water that was once ubiquitous in this area.

The more concentric fracture-like features seen within the smooth floor of the large basin are likely also related to stresses in the surface resulting from the compaction of the vast amount of sediments that infill the basin.

Some of the fractures seem to join the central crater to the smoother basin floor, particularly evident in the perspective view. They could be a later manifestation of stresses due to subsidence or compaction of surface materials.

Finally, in the lower centre of the image, just above the crater at the bottom of the scene and towards the end of the dendritic channels, light-toned and layered deposits have been identified. These are clay minerals, known to be formed in the presence of water.