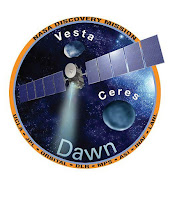 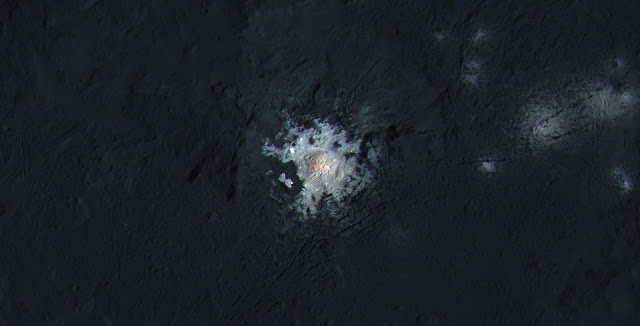 Image above: The bright spots in the center of Occator Crater on Ceres are shown in enhanced color in this view from NASA's Dawn spacecraft. Image Credits: NASA/JPL-Caltech/UCLA/MPS/DLR/IDA/PSI/LPI.

The bright central area of Ceres' Occator Crater, known as Cerealia Facula, is approximately 30 million years younger than the crater in which it lies, according to a new study in the Astronomical Journal. Scientists used data from NASA's Dawn spacecraft to analyze Occator's central dome in detail, concluding that this intriguing bright feature on the dwarf planet is only about 4 million years old -- quite recent in terms of geological history.

Researchers led by Andreas Nathues at the Max Planck Institute for Solar System Research (MPS) in Gottingen, Germany, analyzed data from two instruments on board NASA's Dawn spacecraft: the framing camera, and the visible and infrared mapping spectrometer.

The new study supports earlier interpretations from the Dawn team that this reflective material -- comprising the brightest area on all of Ceres -- is made of carbonate salts, although it did not confirm a particular type of carbonate previously identified. The secondary, smaller bright areas of Occator, called Vinalia Faculae, are comprised of a mixture of carbonates and dark material, the study authors wrote.

New evidence also suggests that Occator's bright dome likely rose in a process that took place over a long period of time, rather than forming in a single event. They believe the initial trigger was the impact that dug out the crater itself, causing briny liquid to rise closer to the surface. Water and dissolved gases, such as carbon dioxide and methane, came up and created a vent system. These rising gases also could have forced carbonate-rich materials to ascend toward the surface. During this period, the bright material would have erupted through fractures, eventually forming the dome that we see today.

The spacecraft is currently on its way to a high-altitude orbit of 12,400 miles (20,000 kilometers), and to a different orbital plane. In late spring, Dawn will view Ceres in "opposition," with the sun directly behind the spacecraft. By measuring details of the brightness of the salt deposits in this new geometry, scientists may gain even more insights into these captivating bright areas. 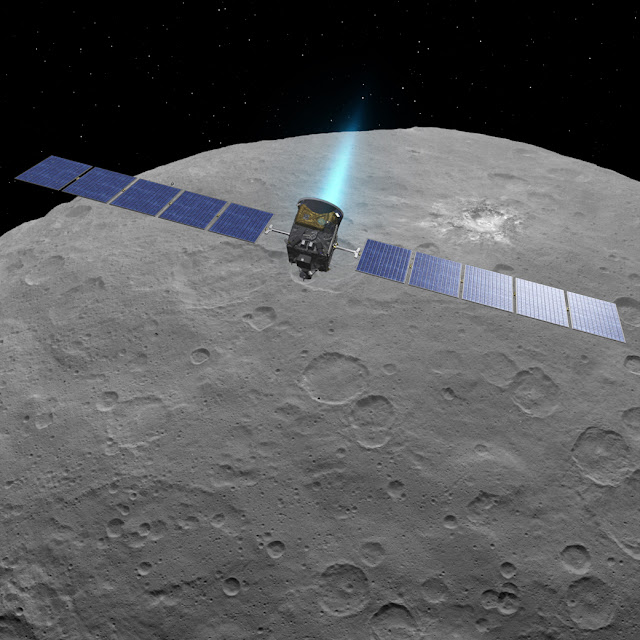 More information about Dawn is available at the following sites: