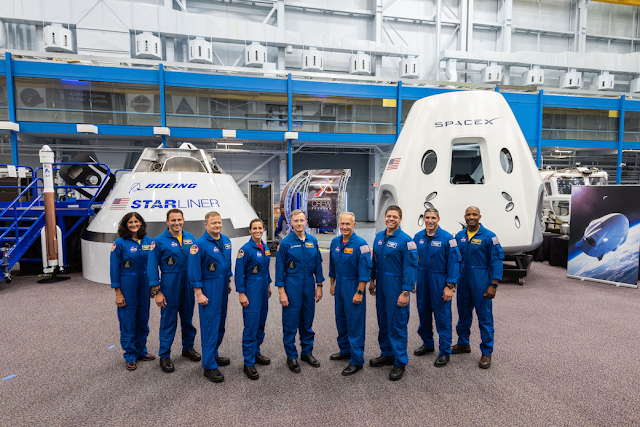 Image above: NASA introduced to the world on Aug. 3, 2018, the first U.S. astronauts who will fly on American-made, commercial spacecraft to and from the International Space Station – an endeavor that will return astronaut launches to U.S. soil for the first time since the space shuttle’s retirement in 2011. The agency assigned nine astronauts to crew the first test flight and mission of both Boeing’s CST-100 Starliner and SpaceX’s Crew Dragon. The astronauts are, from left to right: Sunita Williams, Josh Cassada, Eric Boe, Nicole Mann, Christopher Ferguson, Douglas Hurley, Robert Behnken, Michael Hopkins and Victor Glover. Image Credit: NASA.

ASA introduced to the world on Friday the first U.S. astronauts who will fly on American-made, commercial spacecraft to and from the International Space Station – an endeavor that will return astronaut launches to U.S. soil for the first time since the space shuttle’s retirement in 2011.

“Today, our country’s dreams of greater achievements in space are within our grasp,” said NASA Administrator Jim Bridenstine. “This accomplished group of American astronauts, flying on new spacecraft developed by our commercial partners Boeing and SpaceX, will launch a new era of human spaceflight. Today’s announcement advances our great American vision and strengthens the nation’s leadership in space.”

The agency assigned nine astronauts to crew the first test flight and mission of both Boeing’s CST-100 Starliner and SpaceX’s Crew Dragon. NASA has worked closely with the companies throughout design, development and testing to ensure the systems meet NASA’s safety and performance requirements.

“The men and women we assign to these first flights are at the forefront of this exciting new time for human spaceflight,” said Mark Geyer, director of NASA’s Johnson Space Center in Houston. “It will be thrilling to see our astronauts lift off from American soil, and we can’t wait to see them aboard the International Space Station.”

Eric Boe was born in Miami and grew up in Atlanta. He came to NASA from the Air Force, where he was a fighter pilot and test pilot and rose to the rank of colonel. He was selected as an astronaut in 2000 and piloted space shuttle Endeavour for the STS-126 mission and Discovery on its final flight, STS-133.

Christopher Ferguson is a native of Philadelphia. He is a retired Navy captain, who piloted space shuttle Atlantis for STS-115, and commanded shuttle Endeavour on STS-126 and Atlantis for the final flight of the Space Shuttle Program, STS-135. He retired from NASA in 2011 and has been an integral part of Boeing's CST-100 Starliner program.

Nicole Aunapu Mann is a California native and a lieutenant colonel in the Marine Corps. She is an F/A-18 test pilot with more than 2,500 flight hours in more than 25 aircraft. Mann was selected as an astronaut in 2013. This will be her first trip to space.

Robert Behnken is from St. Ann, Missouri. He has a doctorate in engineering and is a flight test engineer and colonel in the Air Force. He joined the astronaut corps in 2000 and flew aboard space shuttle Endeavour twice, for the STS-123 and STS-130 missions, during which he performed six spacewalks totaling more than 37 hours.

Douglas Hurley calls Apalachin, New York, his hometown. He was a test pilot and colonel in the Marine Corps before coming to NASA in 2000 to become an astronaut. He piloted space shuttle Endeavor for STS-127 and Atlantis for STS-135, the final space shuttle mission.

SpaceX’s Crew Dragon will launch aboard a SpaceX Falcon 9 rocket from Launch Complex 39A at Kennedy Space Center in Florida.

After each company successfully completes its crewed test flight, NASA will begin the final process of certifying that spacecraft and systems for regular crew missions to the space station. The agency has contracted six missions, with as many as four astronauts per mission, for each company.

Josh Cassada grew up in White Bear Lake, Minnesota. He is a Navy commander and test pilot with more than 3,500 flight hours in more than 40 aircraft. He was selected as an astronaut in 2013. This will be his first spaceflight.

Sunita Williams was born in Euclid, Ohio, but considers Needham, Massachusetts, her hometown. Williams came to NASA from the Navy, where she was a test pilot and rose to the rank of captain before retiring. Since her selection as an astronaut in 1998, she has spent 322 days aboard the International Space Station for Expeditions 14/15 and Expeditions 32/33, commanded the space station and performed seven spacewalks.

Victor Glover is from Pomona, California. He is a Navy commander, aviator and test pilot with almost 3,000 hours flying more than 40 different aircraft. He made 400 carrier landings and flew 24 combat missions. He was selected as part of the 2013 astronaut candidate class, and this will be his first spaceflight.

Michael Hopkins was born in Lebanon, Missouri, and grew up on a farm near Richland, Missouri. He is a colonel in the Air Force, where he was a flight test engineer before being selected as a NASA astronaut in 2009. He has spent 166 days on the International Space Station for Expeditions 37/38, and conducted two spacewalks.

Additional crew members will be assigned by NASA’s international partners at a later date.

Image above: NASA’s Commercial Crew Program is working with the American aerospace industry as companies develop a new generation of spacecraft and launch systems to carry crews safely to and from low-Earth orbit – the SpaceX Crew Dragon and Boeing CST-100 Starliner. Image Credit: NASA.

NASA’s continuous presence on the space station for almost 18 years has enabled technology demonstrations and research in biology and biotechnology, Earth and space science, human health, physical sciences. This research has led to dramatic improvements in technology, infrastructure and medicine, and thousands of spinoff technologies that have improved quality of life here on Earth.

The new spaceflight capability provided by Boeing and SpaceX will allow NASA to maintain a crew of seven astronauts on the space station, thereby maximizing scientific research that leads to breakthroughs and also aids in understanding and mitigating the challenges of long-duration spaceflight.

NASA’s Commercial Crew Program is facilitating the development of a U.S. commercial crew space transportation capability with the goal of achieving safe, reliable and cost-effective access to and from the International Space Station and low-Earth orbit. The public-private partnerships fostered by the program will stimulate growth in a robust commercial space industry and spark life-changing innovations for future generations.