Gecko Grippers Moving On Up 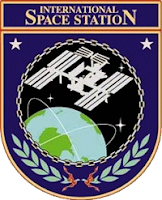 A piece of tape can only be used a few times before the adhesion wears off and it can no longer hold two surfaces together. But researchers at NASA's Jet Propulsion Laboratory in Pasadena, California, are working on the ultimate system of stickiness, inspired by geckos.

Video above: How geckos inspired a new NASA technology that makes things stick to each other in space. Video Credits: NASA/JPL.

Thanks to tiny hairs on the bottom of geckos' feet, these lizards can cling to walls with ease, and their stickiness doesn't wear off with repeated usage. JPL engineer Aaron Parness and colleagues used that concept to create a material with synthetic hairs that are much thinner than a human hair. When a force is applied to make the tiny hairs bend, that makes the material stick to a desired surface.

"This is how the gecko does it, by weighting its feet," Parness said.

Behind this phenomenon is a concept called van der Waals forces. A slight electrical field is created because electrons orbiting the nuclei of atoms are not evenly spaced, so there are positive and negative sides to a neutral molecule.  The positively charged part of a molecule attracts the negatively charged part of its neighbor, resulting in "stickiness." Even in extreme temperature, pressure and radiation conditions, these forces persist.

"The grippers don't leave any residue and don't require a mating surface on the wall the way Velcro would," Parness said.

The newest generation of grippers can support more than 150 Newtons of force, the equivalent of 35 pounds (16 kilograms). 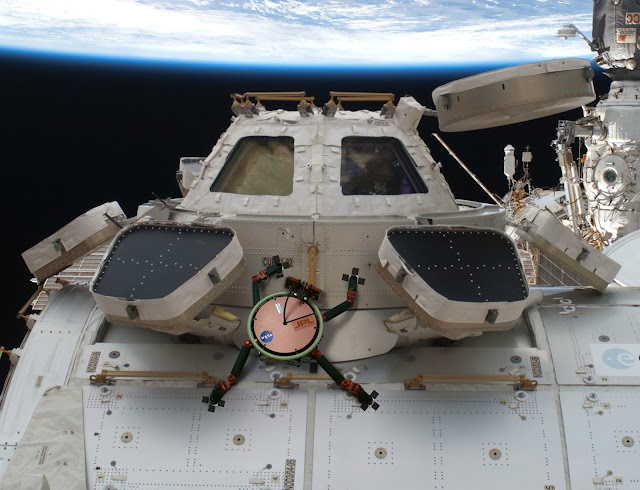 Image above: This artist's concept shows how a future robot called LEMUR (Limbed Excursion Mechanical Utility Robot) could inspect and maintain installations on the International Space Station. The robot would stick to the outside using a gecko-inspired gripping system. Image Credits: NASA/JPL-Caltech.

In a microgravity flight test last year through NASA's Space Technology Mission Directorate’s Flight Opportunities Program, the gecko-gripping technology was used to grapple a 20-pound (10 kilogram) cube and a 250-pound (100 kilogram) person. The gecko material was separately tested in more than 30,000 cycles of turning the stickiness "on" and "off" when Parness was in graduate school at Stanford University in Palo Alto, California. Despite the extreme conditions, the adhesive stayed strong. 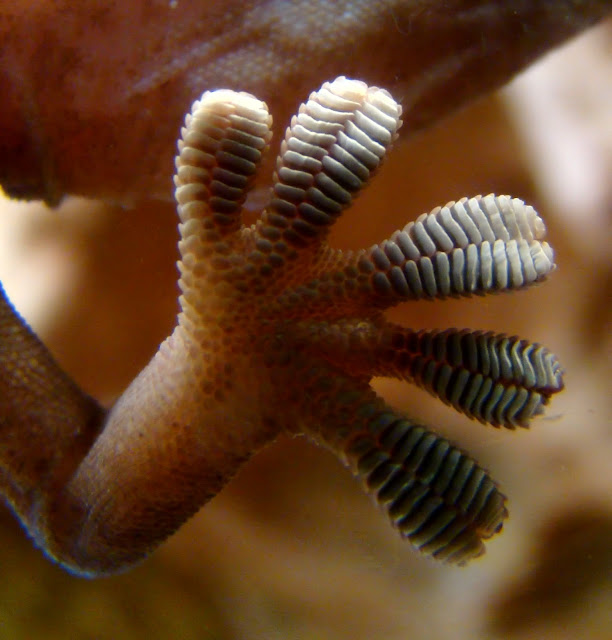 Image above: JPL researchers were inspired by gecko feet, such as the one shown here, in designing a gripping system for space. Just as a gecko's foot has tiny adhesive hairs, the JPL devices have small structures that work in similar ways. Image Credits: Wikimedia Commons.

Researchers have more recently made three sizes of hand-operated "astronaut anchors," which could one day be given to astronauts inside the International Space Station. The anchors are made currently in footprints of 1 by 4 inches (2.5 by 10 centimeters), 2 by 6 inches (5 by 15 centimeters) and 3 by 8 inches (7.6 by 20 centimeters).  They would serve as an experiment to test the gecko adhesives in microgravity for long periods of time and as a practical way for astronauts to attach clipboards, pictures and other handheld items to the interior walls of the station. Astronauts would simply attach the object to the mounting post of the gripper by pushing together the two components of the gripper. Parness and colleagues are collaborating with NASA's Johnson Space Center in Houston on this concept. 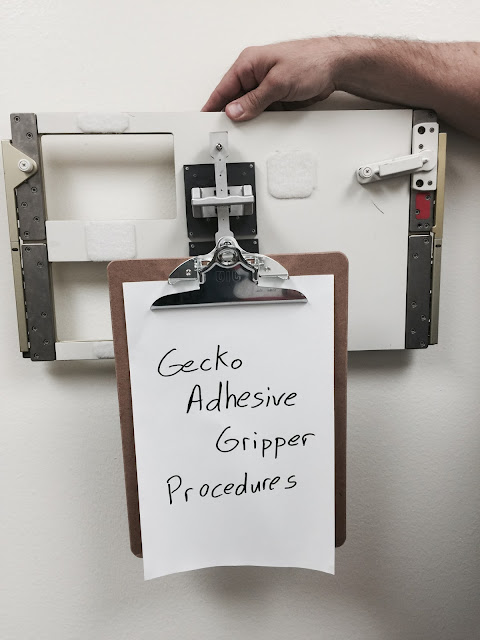 Image above: The gecko grippers could one day be used to mount objects on the inside of the International Space Station. This image shows a gripper attaching a clipboard to a spare panel -- the same kind found inside the United States' modules of the station. Image Credits: NASA/JPL-Caltech.

Parness and his team are also testing the Lemur 3 climbing robot, which has gecko-gripper feet, in simulated microgravity environments. The team thinks possible applications could be to have robots like this on the space station conducting inspections and making repairs on the exterior. For testing, the robot maneuvers across mock-up solar and radiator panels to emulate that environment.

There are numerous applications beyond the space station for this technology.

"We might eventually grab satellites to repair them, service them, and we also could grab space garbage and try to clear it out of the way," Parness said.

The California Institute of Technology in Pasadena manages JPL for NASA.