BASE compares protons to antiprotons with high precision

In a paper published today in Nature, the Baryon Antibaryon Symmetry Experiment (BASE) at CERN's Antiproton Decelerator (AD), reports the most precise comparison of the charge-to-mass ratio of the proton to that of its antimatter equivalent, the antiproton. The charge-to-mass ratio — an important property of particles — can be measured by observing the oscillation of a particle in a magnetic field. The new result shows no difference between the proton and the antiproton, with a four-fold improvement in the energy resolution compared with previous measurements.

To perform the experiment, the BASE collaboration used a Penning-trap system comparable to that developed by the TRAP collaboration in the late 1990s at CERN. However, the method used is faster than in previous experiments. This has allowed BASE to carry out about 13,000 measurements over a 35-day campaign, in which they compare a single antiproton to a negatively charged hydrogen ion (H-). Consisting of a hydrogen atom with a single proton in its nucleus, together with an additional electron, the H- acts as a proxy for the proton.

“We found that the charge-to-mass ratio is identical to within 69 parts per thousand billion, supporting a fundamental symmetry between matter and antimatter,” says BASE spokesperson Stefan Ulmer.

“Research performed with antimatter particles has made amazing progress in the past few years,” says CERN Director-General Rolf Heuer. “I’m really impressed by the level of precision reached by BASE. It’s very promising for the whole field.” 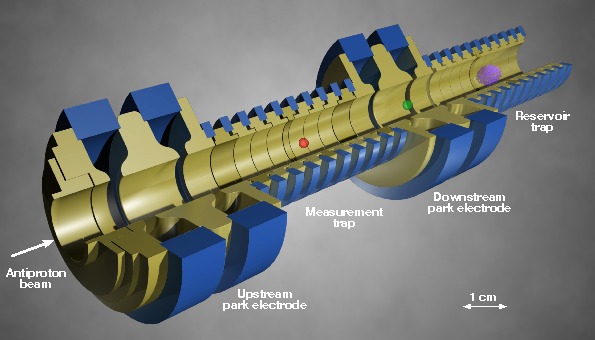 Image above: A cut-away schematic of the Penning trap system used by BASE. The experiment receives antiprotons from CERN's AD; negative hydrogen ions are formed during injection into the apparatus. The set-up works with only a pair of particles at a time, while a cloud of a few hundred others are held in the reservoir trap, for future use. Here, an antiproton is in the measurement trap, while the negative hydyrogen ion is in held by the downstream park electrode. When the antiproton has been measured, it is moved to the upstream park electrode and the hydrogen ion is brought in to the measurement trap. This is repeated thousands of times, enabling a high-precision comparison of the charge-to-mass ratios of the two particles (Image: CERN).

The Standard Model of particle physics – the theory that best describes particles and their fundamental interactions – is known to be incomplete, inspiring various searches for “new physics” that goes beyond the model. These include tests that compare the basic characteristics of matter particles with those of their antimatter counterparts. While matter and antimatter particles can differ, for example, in the way they decay (a difference often referred to as violation of CP symmetry), other fundamental properties, such as the absolute value of their electric charges and masses, are predicted to be exactly equal. Any difference – however small — between the charge-to-mass ratio of protons and antiprotons would break a fundamental law known as CPT symmetry. This symmetry reflects well-established properties of space and time and of quantum mechanics, so such a difference would constitute a dramatic challenge not only to the Standard Model, but also to the basic theoretical framework of particle physics.

The BASE experiment receives antiprotons from the AD, a unique facility in the world for antimatter research. The H- ions are formed by the antiproton injection. The set up holds a single antiproton–H- pair at a time in a magnetic Penning trap, decelerating the particles to ultra-low energies. The experiment then measures the cyclotron frequency of the antiproton and the H- ion — a measurement that allows the team to determine the charge-to-mass ratio — and compares the results.