Rosetta's big day in the Sun 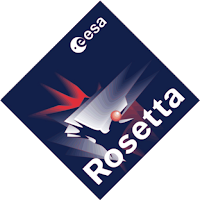 ESA’s Rosetta today witnessed Comet 67P/Churyumov–Gerasimenko making its closest approach to the Sun. The exact moment of perihelion occurred at 02:03 GMT this morning when the comet came within 186 million km of the Sun.

In the year that has passed since Rosetta arrived, the comet has travelled some 750 million kilometres along its orbit towards the Sun, the increasing solar radiation heating up the nucleus and causing its frozen ices to escape as gas and stream out into space at an ever greater rate. These gases, and the dust particles that they drag along, build up the comet’s atmosphere – coma – and tail.

The activity reaches its peak intensity around perihelion and in the weeks that follow – and is clearly visible in the spectacular images returned by the spacecraft in the last months. One image taken by Rosetta’s navigation camera was acquired at 01:04 GMT, just an hour before the moment of perihelion, from a distance of around 327 km.

The scientific camera is also taking images today – the most recent available image was taken at 23:31 GMT on 12 August, just a few hours before perihelion. The comet’s activity is clearly seen in the images, with a multitude of jets stemming from the nucleus, including one outburst captured in an image taken at 17:35 GMT yesterday.

“Activity will remain high like this for many weeks, and we’re certainly looking forward to seeing how many more jets and outburst events we catch in the act, as we have already witnessed in the last few weeks,” says Nicolas Altobelli, acting Rosetta project scientist.

Rosetta’s measurements suggest the comet is spewing up to 300 kg of water vapour – roughly the equivalent of two bathtubs – every second. This is a thousand times more than was observed this time last year when Rosetta first approached the comet. Then, it recorded an outflow rate of just 300 g per second, equivalent to two small glasses of water. 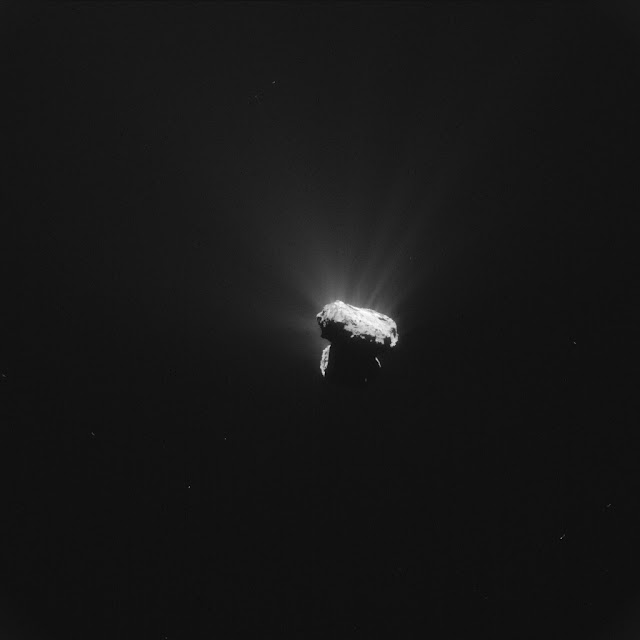 Along with gas, the nucleus is also estimated to be shedding up to 1000 kg of dust per second, creating dangerous working conditions for Rosetta.

“In recent days, we have been forced to move even further away from the comet. We’re currently at a distance of between 325 km and 340 km this week, in a region where Rosetta’s startrackers can operate without being confused by excessive dust levels – without them working properly, Rosetta can’t position itself in space,” comments Sylvain Lodiot, ESA’s spacecraft operations manager.

Monitoring the comet’s changing environment in the lead up to, during and after perihelion is one of the primary long-term science goals of the mission.

Over the last few months, seasons on the comet have changed, throwing its southern hemisphere into a short – about 10 month – summer after more than five-and-a-half years in darkness. This has revealed parts of the surface that have previously been cast in shadow during Rosetta’s sojourn at the comet, allowing scientists to fill in some of the missing pieces of its regional map.

They have now identified four new geological regions on the southern hemisphere, which includes parts of both comet lobes, bringing the total number of regions to 23. The names of the new regions follow the naming convention of Egyptian gods and goddesses adopted for the comet: Anhur, Khonsu, Sobek and Wosret.

The comet’s average temperature has also been on the increase. Not long after arriving, surface temperatures of around –70ºC were recorded. By April–May 2015, this had risen to only a few degrees below zero celsius, and now highs of a few tens of degrees above zero are forecast for the next month. 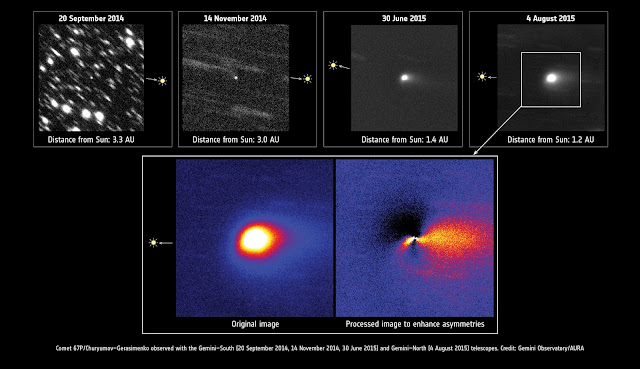 Meanwhile, astronomers back on Earth have been following the comet’s evolution from afar. Rosetta is far too close to the comet to see its growing tail, but images collected over the past few months with telescopes across the world show that it already extends more than 120 000 km.

A lop-sided coma, with a notable high-density region away from the main tail, was revealed in various images, including some taken last week from the Gemini-North telescope on Mauna Kea, Hawaii. 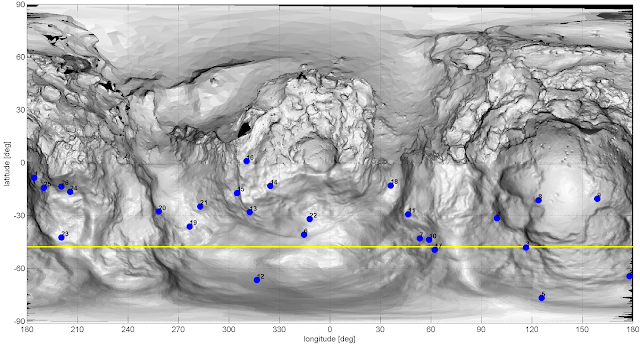 “Combining these big-picture views from ground-based telescopes with Rosetta’s close-up study of individual jets and outbursts will help us to understand the processes at work on the comet’s surface as it approaches the Sun,” adds Nicolas.

“We aim to go back in much closer again after the activity subsides and make a survey of how the comet has changed. We also continue to hope that Philae will be able to resume its scientific operations on the surface and give us a detailed look at changes which may be occurring immediately surrounding its landing site.”

Finally, Patrick Martin, ESA’s Rosetta mission manager remarks: “It’s exciting to reach the milestone of perihelion, and we look forward to seeing how this amazing comet behaves as we move away from the Sun with it over the coming year.”

A Google+ Hangout with Rosetta mission experts, celebrating a year at the comet and perihelion, was broadcast today. Watch a replay here: https://youtu.be/TaBZbc6WGLs

Rosetta is an ESA mission with contributions from its Member States and NASA. Rosetta’s Philae lander is contributed by a consortium led by DLR, MPS, CNES and ASI.