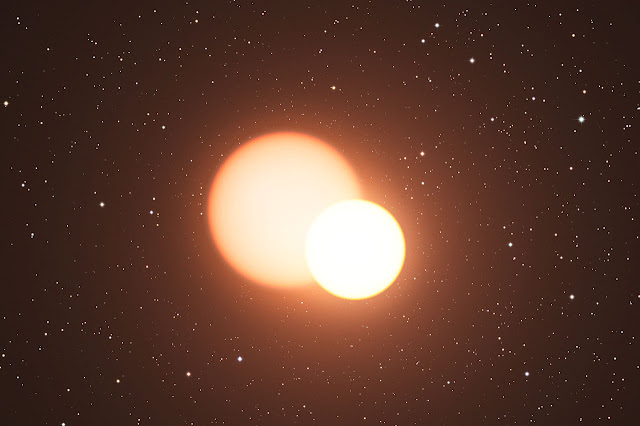 Artist’s impression of the remarkable double star OGLE-LMC-CEP0227
By discovering the first double star where a pulsating Cepheid variable and another star pass in front of one another, an international team of astronomers has solved a decades-old mystery. The rare alignment of the orbits of the two stars in the double star system has allowed a measurement of the Cepheid mass with unprecedented accuracy. Up to now astronomers had two incompatible theoretical predictions of Cepheid masses. The new result shows that the prediction from stellar pulsation theory is spot on, while the prediction from stellar evolution theory is at odds with the new observations.

Grzegorz Pietrzyński introduces this remarkable result: “By using the HARPS instrument on the 3.6-metre telescope at ESO’s La Silla Observatory in Chile, along with other telescopes, we have measured the mass of a Cepheid with an accuracy far greater than any earlier estimates. This new result allows us to immediately see which of the two competing theories predicting the masses of Cepheids is correct.”

Classical Cepheid Variables, usually called just Cepheids, are unstable stars that are larger and much brighter than the Sun [1]. They expand and contract in a regular way, taking anything from a few days to months to complete the cycle. The time taken to brighten and grow fainter again is longer for stars that are more luminous and shorter for the dimmer ones. This remarkably precise relationship makes the study of Cepheids one of the most effective ways to measure the distances to nearby galaxies and from there to map out the scale of the whole Universe [2].

Unfortunately, despite their importance, Cepheids are not fully understood. Predictions of their masses derived from the theory of pulsating stars are 20–30% less than predictions from the theory of the evolution of stars. This embarrassing discrepancy has been known since the 1960s. 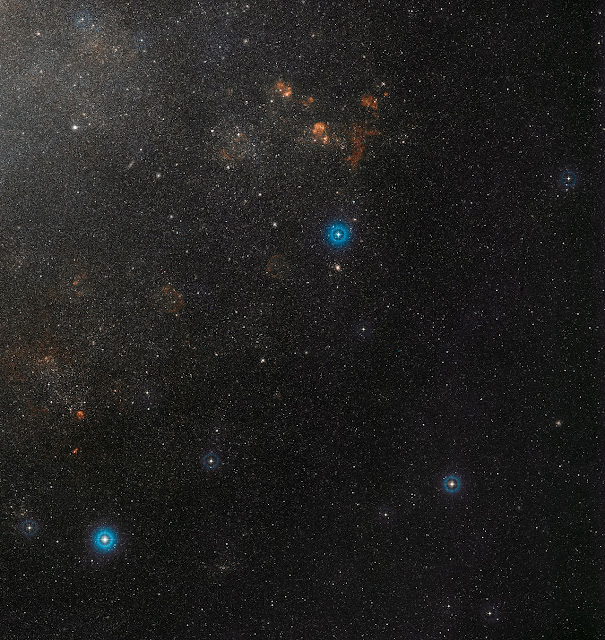 Wide-field view of part of the Large Magellanic Cloud and the remarkable double star OGLE-LMC-CEP0227
To resolve this mystery, astronomers needed to find a double star containing a Cepheid where the orbit happened to be seen edge-on from Earth. In these cases, known as eclipsing binaries, the brightness of the two stars dims as one component passes in front of the other, and again when it passes behind the other star. In such pairs astronomers can determine the masses of the stars to high accuracy [3]. Unfortunately neither Cepheids nor eclipsing binaries are common, so the chance of finding such an unusual pair seemed very low.
None are known in the Milky Way.

Wolfgang Gieren, another member of the team, takes up the story: “Very recently we actually found the double star system we had hoped for among the stars of the Large Magellanic Cloud. It contains a Cepheid variable star pulsating every 3.8 days. The other star is slightly bigger and cooler, and the two stars orbit each other in 310 days. The true binary nature of the object was immediately confirmed when we observed it with the HARPS spectrograph on La Silla.”

The observers carefully measured the brightness variations of this rare object, known as OGLE-LMC-CEP0227 [4], as the two stars orbited and passed in front of one another. They also used HARPS and other spectrographs to measure the motions of the stars towards and away from the Earth — both the orbital motion of both stars and the in-and-out motion of the surface of the Cepheid as it swelled and contracted.

This very complete and detailed data allowed the observers to determine the orbital motion, sizes and masses of the two stars with very high accuracy — far surpassing what had been done before for a Cepheid. The mass of the Cepheid is now known to about 1% and agrees exactly with predictions from the theory of stellar pulsation. However, the larger mass predicted by stellar evolution theory was shown to be significantly in error.

The much-improved mass estimate is only one outcome of this work, and the team hopes to find other examples of these remarkably useful pairs of stars to exploit the method further. They also believe that from such binary systems they will eventually be able to pin down the distance to the Large Magellanic Cloud to 1%, which would mean an extremely important improvement of the cosmic distance scale.

[1] The first Cepheid variables were spotted in the 18th century and the brightest ones can easily be seen to vary from night to night with the unaided eye. They take their name from the star Delta Cephei in the constellation of Cepheus (the King), which was first seen to vary by John Goodricke in England in 1784. Remarkably, Goodricke was also the first to explain the light variations of another kind of variable star, eclipsing binaries. In this case two stars are in orbit around each other and pass in front of each other for part of their orbits and so the total brightness of the pair drops. The very rare object studied by the current team is both a Cepheid and an eclipsing binary. Classical Cepheids are massive stars, distinct from similar pulsating stars of lower mass that do not share the same evolutionary history.

[2] The period luminosity relation for Cepheids, discovered by Henrietta Leavitt in 1908, was used by Edwin Hubble to make the first estimates of the distance to what we now know to be galaxies. More recently Cepheids have been observed with the Hubble Space Telescope and with the ESO VLT on Paranal to make highly accurate distance estimates to many nearby galaxies.

[3] In particular, astronomers can determine the masses of the stars to high accuracy if both stars happen to have a similar brightness and therefore the spectral lines belonging to each of the two stars can be seen in the observed spectrum of the two stars together, as is the case for this object. This allows the accurate measurement of the motions of both stars towards and away from Earth as they orbit, using the Doppler effect.

[4] The name OGLE-LMC-CEP0227 arises because the star was first discovered to be a variable during the OGLE search for gravitational microlensing.  More details about OGLE are available at: http://ogle.astrouw.edu.pl/

This research was presented in a paper to appear in the journal Nature on 25 November 2010.