After just a month of operation in 2011, the LHC has already achieved more than half the total number of proton-proton collisions delivered in 2010. The experiments have accumulated an integrated luminosity of 28 pb-1 this year. Integrated luminosity is a measure of the total number of proton-proton collisions measured by the experiments. 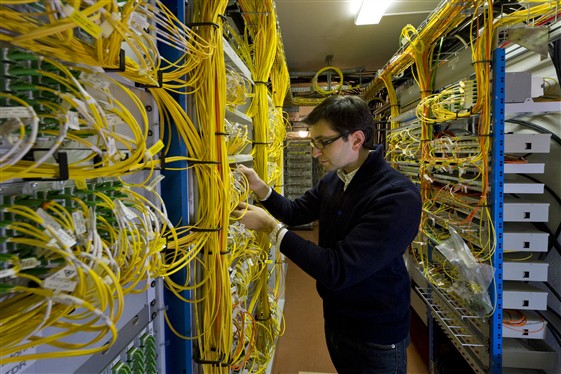 Image above: The CERN Control Centre's optical fibre starpoint, which serves the LHC installations and the computing centre in Meyrin. CERN’s 35,000 km of optical fibres are used to synchronise the accelerators, take measurements of the beams and to send controls to the LHC.

The impressive progress is the result of a rapid succession of LHC “fills” with increasing numbers of proton bunches. It indicates how quickly the LHC operators are now able to turn the machine around between successive fills, and how well LHC running has been incorporated into the overall operation of CERN’s accelerator complex.