The scars of impacts on Mars

Elongated crater on Mars
ESA’s Mars Express has returned new images of an elongated impact crater in the southern hemisphere of Mars. Located just south of the Huygens basin, it could have been carved out by a train of projectiles striking the planet at a shallow angle.

The large Huygens basin (not visible in the main image but seen in the wider contextual image) is about 450 km in diameter and lies in the heavily cratered southern highlands. In this area there are many impact scars but none perhaps are more intriguing than the ‘elongated craters’. 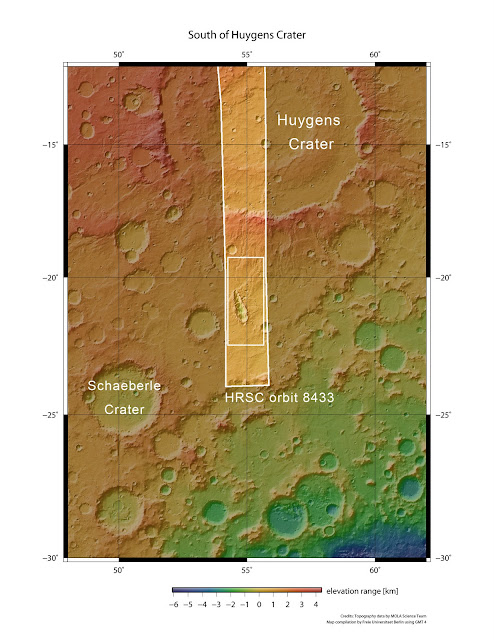 Elongated crater, south of Huygens crater
One of these craters is seen in this new image, which covers an area of 133 x 53 km at 21°S / 55°E. The scene was captured on 4 August 2010 and the smallest objects distinguishable by the camera are about 15 m across.

This unnamed elongated crater sits just to the south of the much larger Huygens basin. It is about 78 km in length, opens from just under 10 km wide at one end to 25 km at the other, and reaches a depth of 2 km.

Features in the elongated crater
Impact craters are generally round because the projectiles that create them push into the ground before the shockwave of the impact can explode outwards. So why is this one elongated?

The clue comes from the surrounding blanket of material, thrown out in the initial impact. This ‘ejecta blanket’ is shaped like a butterfly’s wings, with two distinct lobes. This hints that two projectiles, possibly halves of a once-intact body, slammed into the surface here.

Elevation of the elongated crater
In the crater itself, there are three deeper areas that could be evidence for more than two projectiles. In addition, a second elongated crater lies to the north-northwest. It can be seen in the wider contextual image and is in line with the one seen here, reinforcing the notion that these structures were the result of a train of projectiles.

Elongated crater in high resolution
In the early 1980s, scientists proposed that elongated impact craters were formed by incoming chains of orbital debris following trajectories that decayed with time. As the debris spiralled downwards, it eventually struck the planet at shallow angles, gouging out the elongated craters. 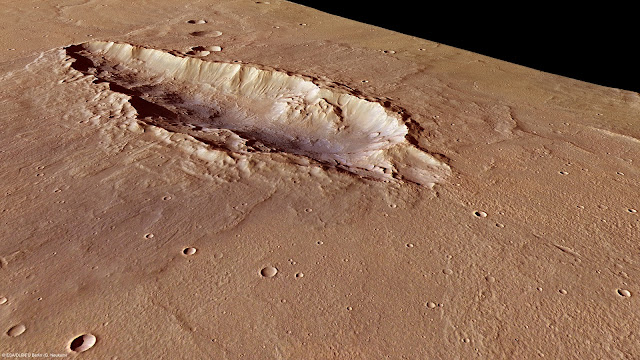 Perspective view of elongated crater
This particular ejecta blanket contains many smaller craters, indicating that the original formed a relatively long time ago and then itself become a target. 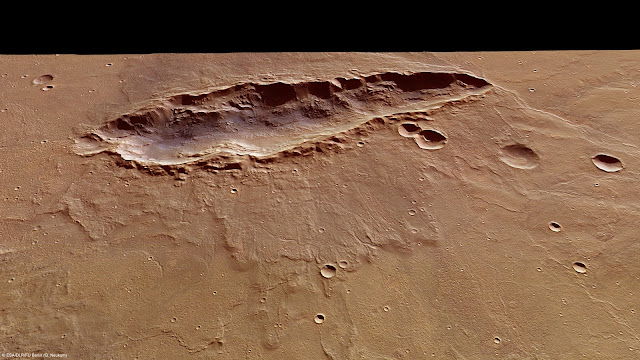 Perspective view of elongated crater
In addition, there are several small channels on the blanket, suggesting that the strike took place into a surface rich in volatiles, perhaps even water, that were melted by the heat of impact and flowed away. 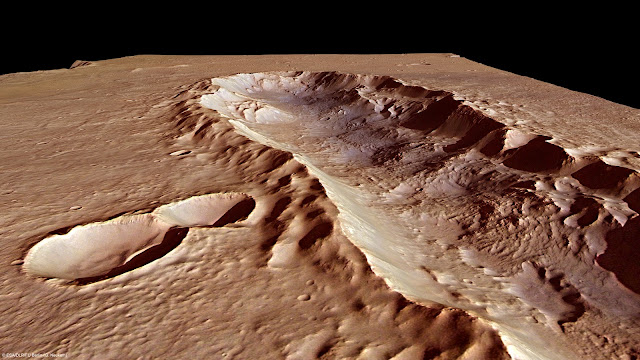 Perspective view of elongated crater
Below the eastern crater rim are two well-formed and relatively deep craters. They have punched through the ejecta blanket and so must have appeared after the formation of the large crater. Despite their sizes of 4 km and 5 km, these smaller craters show no indication of the presence of water. 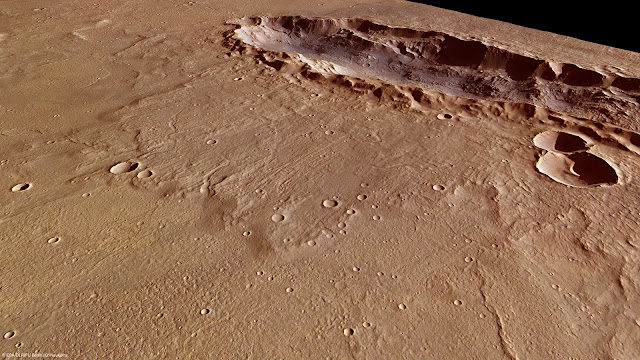 Perspective view of elongated crater
To the north there is another crater that must be older because the butterfly-ejecta blanket has partially flowed into it.

Several landslides have modified the steep crater rim. This can be most clearly seen on the two smaller craters on the rim, which are only partially preserved, parts of them having fallen away.

The formation of these elongated features is not over: the martian moon Phobos will plough into the planet in a few tens of millions of years, breaking up in the process, and likely creating new chains across the surface.