The NASA/ESA/ASI Cassini-Huygens mission has directly sampled the water plumes jetting into space from Saturn’s moon Enceladus. The findings from these fly-throughs are the strongest evidence yet for the existence of large-scale saltwater reservoirs beneath the moon’s icy crust.

Enceladus’ water plumes shoot water vapour and tiny grains of ice into space. They originate from the ‘tiger stripe’ surface fractures at the moon’s south pole, and create the faint E-ring, which traces the orbit of Enceladus around Saturn. 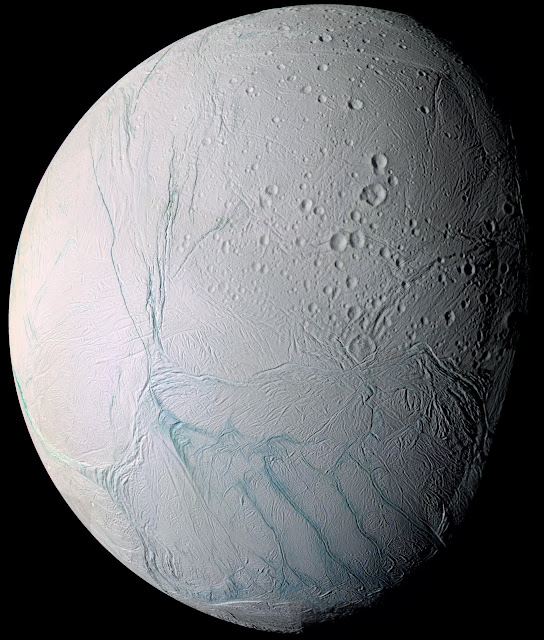 Enceladus' craters and complex, fractured terrains
The Cassini spacecraft discovered the plumes in 2005 and more recently has been able to fly directly through them.

During three of Cassini’s passes in 2008 and 2009, the Cosmic Dust Analyser measured the composition of freshly ejected plume grains. The icy particles hit the detector target at speeds of 6.5–17.5 km/s, and vaporised instantly. Electrical fields inside the instrument then separated the various constituents of the resulting impact cloud for analysis.

Far away from Enceladus, the data show that the ejected grains are relatively small and mostly salt-poor, closely matching the composition of the E-ring. Closer to the moon, however, Cassini has found that relatively large, salt-rich ice grains dominate. 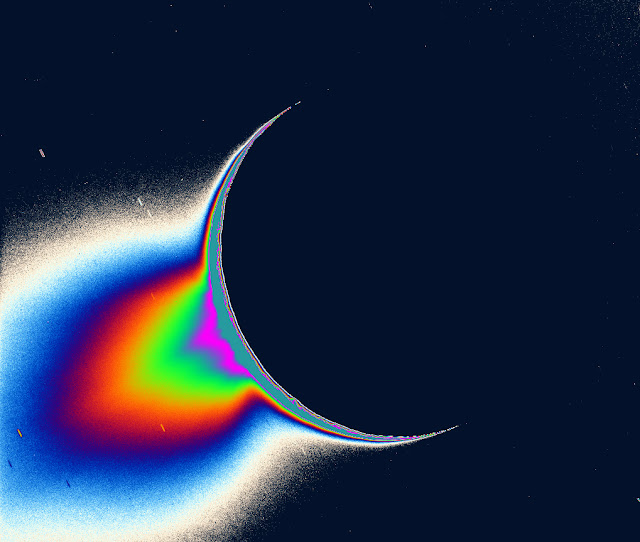 Computer processed image to highlight the water plumes
It appears as though more than 99% of the total mass of ejected solids is in salt-rich grains, but most of these are heavy and fall back to the moon, so never make it into the E-ring.

The salt-rich particles have an ‘ocean-like’ composition which indicates that most, if not all, of the expelled ice comes from liquid saltwater, rather than from the icy surface of the moon.

When salty water freezes slowly, the salt is squeezed out, leaving pure water ice behind. So, if the plumes were coming from the surface ice, there should be very little salt in them.

“There currently is no plausible way to produce a steady outflow of salt-rich grains from solid ice across the tiger stripes other than from saltwater under Enceladus’ icy surface,” says Frank Postberg, Universität Heidelberg, Germany, who is the lead author on the paper announcing these results. 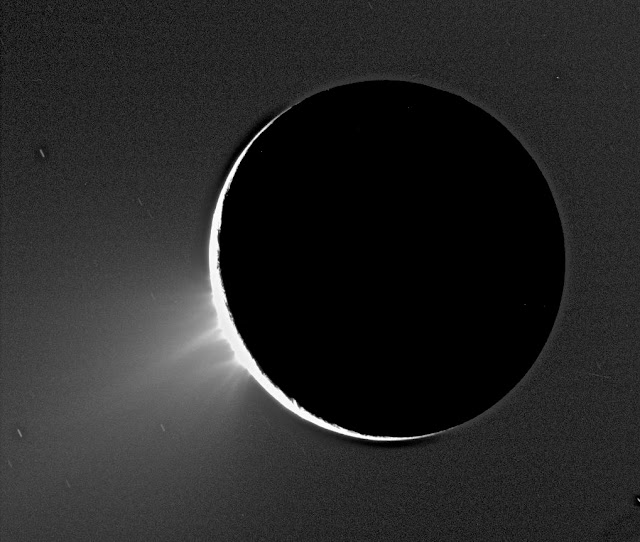 Sunlight scattering through Enceladus's water plumes
The picture the team envisages instead is that deep underneath Enceladus’ surface, perhaps 80 km down, there is a layer of water between the rocky core and the icy mantle, kept liquid by tidal forces generated by Saturn and some neighbouring moons, as well as by the heat generated by radioactive decay.

Salt in the rock dissolves into the water, which accumulates in liquid reservoirs beneath the icy crust. When the outermost layer cracks open, the reservoir is exposed to space. The drop in pressure causes the liquid to evaporate, with some of it flash-freezing into salty ice grains: together these create the plumes.

Roughly 200 kg of water vapour is lost every second in the plumes, with smaller amounts of ice grains. According to the team’s calculations, the water reservoirs must have large evaporating surfaces, otherwise they would easily freeze over, stopping the plumes.

“Enceladus is a tiny icy moon located in a region of the outer Solar System where no liquid water was expected to exist, because of its large distance from the Sun,” says Nicolas Altobelli, ESA’s Project Scientist for the Cassini-Huygens mission.

“This finding is therefore a crucial new piece of evidence showing that environmental conditions favourable to the emergence of life may be sustainable on icy bodies orbiting gas giant planets.”

At Saturn and Titan: http://www.esa.int/SPECIALS/Cassini-Huygens/index.html