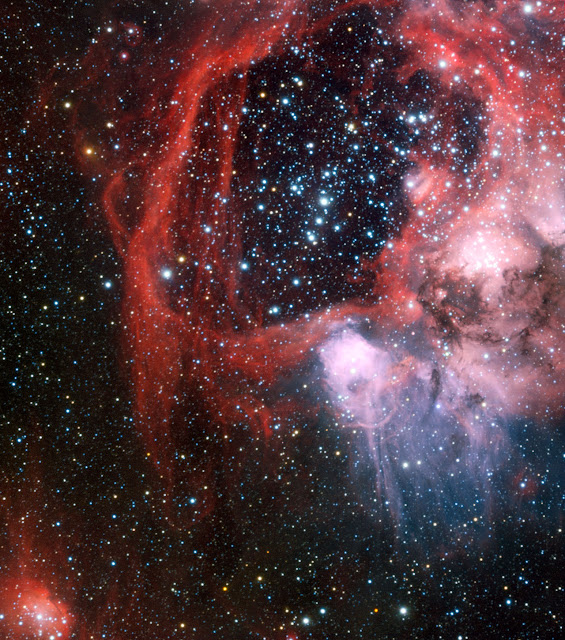 Superbubble LHA 120-N 44 in the Large Magellanic Cloud
ESO’s Very Large Telescope captured this striking view of the nebula around the star cluster NGC 1929 within the Large Magellanic Cloud, a satellite galaxy of our own Milky Way. A colossal example of what astronomers call a superbubble dominates this stellar nursery. It is being carved by the winds from bright young stars and the shockwaves from supernova explosions.

The Large Magellanic Cloud is a small neighbouring galaxy to the Milky Way. It contains many regions where clouds of gas and dust are forming new stars. One such region, surrounding the star cluster NGC 1929, is shown in close-up in this new image from ESO’s Very Large Telescope. This nebula is officially known as LHA 120–N 44, or just N 44 for short. Hot young stars in NGC 1929 are emitting intense ultraviolet light and causing the gas to glow. This effect highlights the aptly-named superbubble, a vast shell of material around 325 by 250 light-years across. For comparison, the nearest star to our Sun is just over four light-years distant. 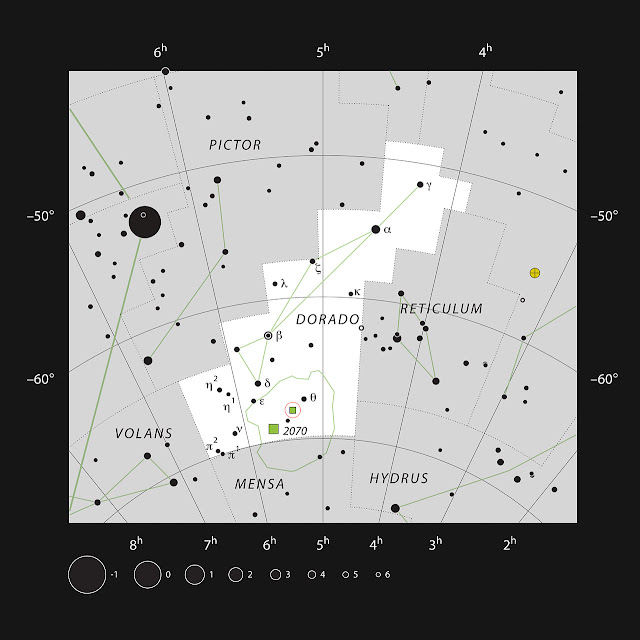 Superbubble in the constellation of Dorado
The N 44 superbubble has been produced by the combination of two processes. Firstly, stellar winds — streams of charged particles from the very hot and massive stars in the central cluster — cleared out the central region. Then massive cluster stars exploded as supernovae creating shockwaves and pushing the gas out further to form the glowing bubble. 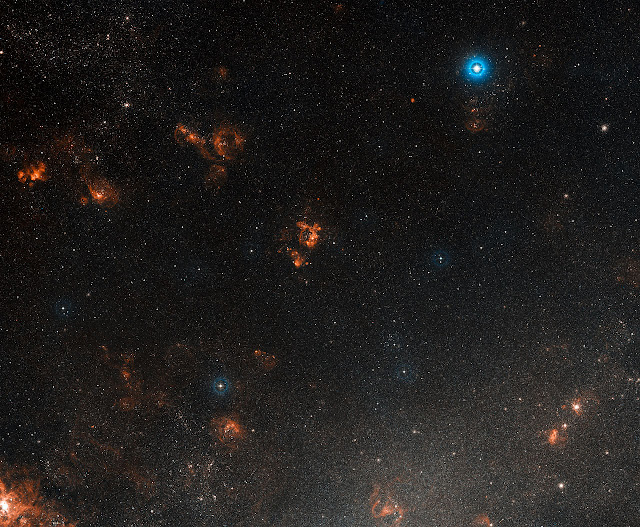 Wide-field view of the sky around NGC 1929
Although the superbubble is shaped by destructive forces, new stars are forming around the edges where the gas is being compressed. Like recycling on a cosmic scale, this next generation of stars will breathe fresh life into NGC 1929.


Zooming in on a superbubble in the Large Magellanic Cloud
The image was created by ESO from observational data identified by Manu Mejias, from Argentina [1], who participated in ESO’s Hidden Treasures 2010 astrophotography competition [2]. The competition was organised by ESO in October–November 2010, for everyone who enjoys making beautiful images of the night sky using astronomical data obtained using professional telescopes.

[1] Manu searched through ESO’s archive and identified datasets that he used to compose his image of NGC 1929, which was ranked joint seventh in the competition, out of almost 100 entries. His original work can be seen here.

[2] ESO’s Hidden Treasures 2010 competition gave amateur astronomers the opportunity to search through ESO’s vast archives of astronomical data, hoping to find a well-hidden gem that needed polishing by the entrants. To find out more about Hidden Treasures, visit http://www.eso.org/public/outreach/hiddentreasures/.

ESO, the European Southern Observatory, is the foremost intergovernmental astronomy organisation in Europe and the world’s most productive astronomical observatory. It is supported by 15 countries: Austria, Belgium, Brazil, the Czech Republic, Denmark, France, Finland, Germany, Italy, the Netherlands, Portugal, Spain, Sweden, Switzerland and the United Kingdom. ESO carries out an ambitious programme focused on the design, construction and operation of powerful ground-based observing facilities enabling astronomers to make important scientific discoveries. ESO also plays a leading role in promoting and organising cooperation in astronomical research. ESO operates three unique world-class observing sites in Chile: La Silla, Paranal and Chajnantor. At Paranal, ESO operates the Very Large Telescope, the world’s most advanced visible-light astronomical observatory and two survey telescopes. VISTA works in the infrared and is the world’s largest survey telescope and the VLT Survey Telescope is the largest telescope designed to exclusively survey the skies in visible light. ESO is the European partner of a revolutionary astronomical telescope ALMA, the largest astronomical project in existence. ESO is currently planning a 40-metre-class European Extremely Large optical/near-infrared Telescope, the E-ELT, which will become “the world’s biggest eye on the sky”.