NASA's GRAIL mission has beamed back its first video of the far side of the moon. The imagery was taken on Jan. 19 by the MoonKAM aboard the mission's "Ebb" spacecraft.

A camera aboard one of NASA's twin Gravity Recovery And Interior Laboratory (GRAIL) lunar spacecraft has returned its first unique view of the far side of the moon. MoonKAM, or Moon Knowledge Acquired by Middle school students, will be used by students nationwide to select lunar images for study.

GRAIL consists of two identical spacecraft, recently named Ebb and Flow, each of which is equipped with a MoonKAM. The images were taken as part of a test of Ebb's MoonKAM on Jan. 19. The GRAIL project plans to test the MoonKAM aboard Flow at a later date. 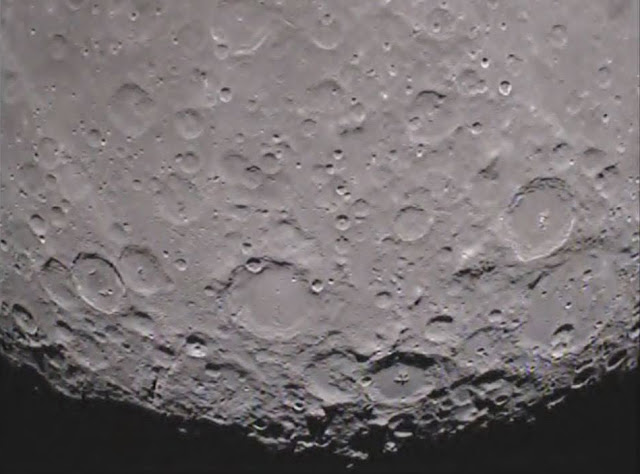 Image above: South pole of the far side of the moon as seen from the GRAIL mission’s Ebb spacecraft. Image credit: NASA / JPL-Caltech.

In the video, the north pole of the moon is visible at the top of the screen as the spacecraft flies toward the lunar south pole. One of the first prominent geological features seen on the lower third of the moon is the Mare Orientale, a 560-mile-wide (900 kilometer) impact basin that straddles both the moon's near and far side.

The clip ends with rugged terrain just short of the lunar south pole. To the left of center, near the bottom of the screen, is the 93-mile-wide (149 kilometer) Drygalski crater with a distinctive star-shaped formation in the middle. The formation is a central peak, created many billions of years ago by a comet or asteroid impact.

"The quality of the video is excellent and should energize our MoonKAM students as they prepare to explore the moon," said Maria Zuber, GRAIL principal investigator from the Massachusetts Institute of Technology in Cambridge.

Thousands of fourth- to eighth-grade students will select target areas on the lunar surface and send requests to the GRAIL MoonKAM Mission Operations Center in San Diego. Photos of the target areas will be sent back by the satellites for students to study. The MoonKAM program is led by Sally Ride, America's first woman in space. Her team at Sally Ride Science and undergraduate students at the University of California in San Diego will engage middle schools across the country in the GRAIL mission and lunar exploration. GRAIL is NASA's first planetary mission carrying instruments fully dedicated to education and public outreach.

"We have had great response from schools around the country; more than 2,500 signed up to participate so far," Ride said. "In mid-March, the first pictures of the moon will be taken by students using MoonKAM. I expect this will excite many students about possible careers in science and engineering."

Launched in September 2011, Ebb and Flow periodically perform trajectory correction maneuvers that, over time, will lower their orbits to near-circular ones with an altitude of about 34 miles (55 kilometers). During their science mission, the duo will answer longstanding questions about the moon and give scientists a better understanding of how Earth and other rocky planets in the solar system formed.

JPL is managed for NASA by the California Institute of Technology in Pasadena.