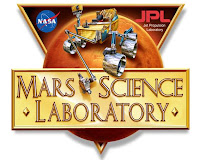 "Every day is one day closer to the most challenging part of this mission," said Pete Theisinger, Mars Science Laboratory project manager at NASA's Jet Propulsion Laboratory in Pasadena, Calif. "Landing an SUV-sized vehicle next to the side of a mountain 85 million miles from home is always stimulating. Our engineering and science teams continue their preparations for that big day and the surface operations to follow."

On Sunday, April 22, a week-long operational readiness test concluded at JPL. The test simulated aspects of the mission's early surface operations. Mission planners and engineers sent some of the same commands they will send to the real Curiosity rover on the surface of Mars to a test rover used at JPL.


Image above: Curiosity, the big rover of This artist's concept depicts the moment that NASA's Curiosity rover touches down onto the Martian surface. Image credit: NASA/JPL-Caltech.

"Our test rover has a central computer identical to Curiosity's currently on its way to Mars," said Eric Aguilar, the mission's engineering test lead at JPL. "We ran all our commands through it and watched to make sure it drove, took pictures and collected samples as expected by the mission planners. It was a great test and gave us a lot of confidence moving forward."

The Mars Science Laboratory spacecraft, launched Nov. 26, 2011, will deliver Curiosity to the surface of Mars on the evening of Aug. 5, 2012, PDT (early on Aug. 6, Universal Time and EDT) to begin a two-year prime mission. Curiosity's landing site is near the base of a mountain inside Gale Crater, near the Martian equator. Researchers plan to use Curiosity to study layers in the mountain that hold evidence about wet environments of early Mars.

The Cruise to Mars

JPL, a division of the California Institute of Technology in Pasadena, manages the mission for the NASA Science Mission Directorate, Washington. More information about Curiosity is online at http://www.nasa.gov/msl and http://mars.jpl.nasa.gov/msl/ .