ESO’s Very Large Telescope (VLT) has taken the most detailed image so far of a spectacular part of the stellar nursery called NGC 6357. The view shows many hot young stars, glowing clouds of gas and weird dust formations sculpted by ultraviolet radiation and stellar winds.

Deep in the Milky Way in the constellation of Scorpius (The Scorpion) lies NGC 6357 [1], a region of space where new stars are being born in of chaotic clouds of gas and dust [2]. The outer parts of this vast nebula have now been imaged by ESO’s Very Large Telescope, producing the best picture of this region taken so far [3]. 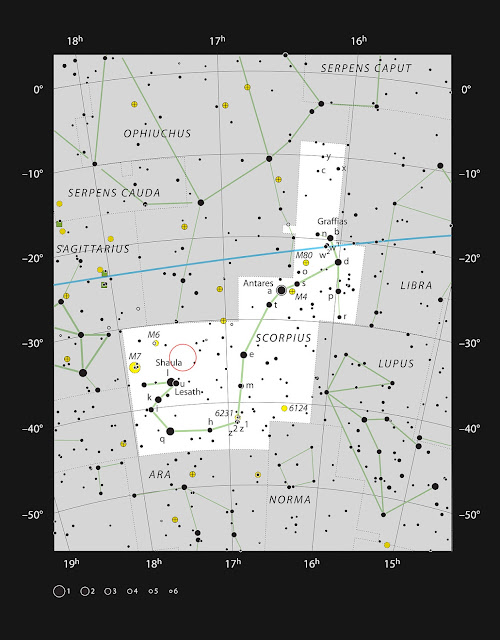 The stellar nursery NGC 6357 in the constellation of Scorpius

The new picture shows a broad river of dust across the centre that absorbs the light from more distant objects. To the right there is a small cluster of brilliant blue-white young stars that have formed from the gas. These are probably only a few million years old, very young by stellar standards. The intense ultraviolet radiation streaming out from these stars is hollowing out a cavity in the surrounding gas and dust and sculpting it in strange ways. 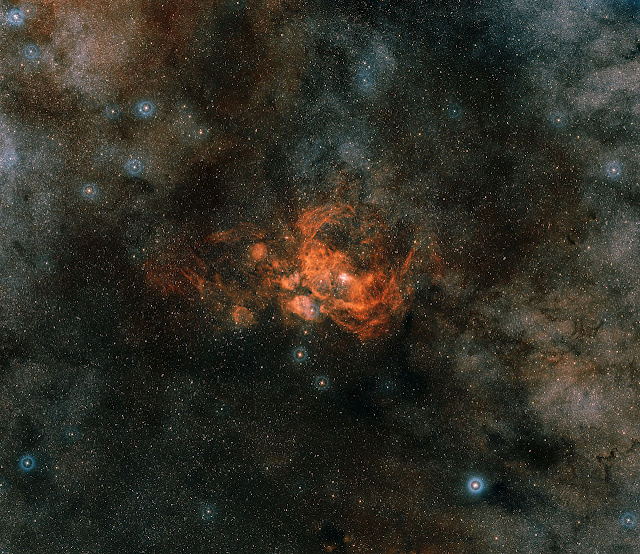 The whole image is covered with dark trails of cosmic dust, but some of the most fascinating dark features appear at the lower right and on the right hand edge of the picture. Here the radiation from the bright young stars has created curious elephant trunk columns, similar to the famous “pillars of creation” in the Eagle Nebula (opo9544a). Cosmic dust is much finer than the more familiar domestic variety. It more closely resembles smoke and consists mostly of tiny particles of silicates, graphite, and water ice that were produced and expelled into space by earlier generations of stars.

The bright central part of NGC 6357 contains a cluster of high-mass stars whose inhabitants are among the brightest in our galaxy. This inner region, not seen in this new picture, has been much studied and imaged by the NASA/ESA Hubble Space Telescope (heic0619). But this new picture shows that even the less well known outer parts of this nursery contain fascinating structures that can be revealed by the power of the VLT.


Panning across the stellar nursery NGC 6357

This image was produced as part of the ESO Cosmic Gems programme [4].

[1] This object also bears the curious name War and Peace Nebula, which has no link to Tolstoy’s great novel, but was given to this object by scientists working on the Midcourse Space Experiment. They noted that the bright, western part of the nebula resembled a dove, while the eastern part looked like a skull in their infrared images. Unfortunately this effect cannot be seen in the visible-light image presented here. The object is also occasionally nicknamed the Lobster Nebula.

[2] NGC 6357 was first recorded visually by John Herschel from South Africa in 1837. He only recorded the brightest central parts and the full scale of this huge nebula was only seen in photographs much later.

[3] The part of NGC 6357 shown in the new VLT image has not been targeted by the NASA/ESA Hubble Space Telescope.

[4] The ESO Cosmic Gems programme is an outreach initiative to produce images of interesting, intriguing or visually attractive objects using ESO telescopes, for the purposes of education and public outreach. The programme makes use of small amounts of observing time, combined with otherwise unused time on the telescopes’ schedules so as to minimise the impact on science observations. All data collected may also be suitable for scientific purposes, and are made available to astronomers through ESO’s science archive.

The year 2012 marks the 50th anniversary of the founding of the European Southern Observatory (ESO). ESO is the foremost intergovernmental astronomy organisation in Europe and the world’s most productive astronomical observatory. It is supported by 15 countries: Austria, Belgium, Brazil, the Czech Republic, Denmark, France, Finland, Germany, Italy, the Netherlands, Portugal, Spain, Sweden, Switzerland and the United Kingdom. ESO carries out an ambitious programme focused on the design, construction and operation of powerful ground-based observing facilities enabling astronomers to make important scientific discoveries. ESO also plays a leading role in promoting and organising cooperation in astronomical research. ESO operates three unique world-class observing sites in Chile: La Silla, Paranal and Chajnantor. At Paranal, ESO operates the Very Large Telescope, the world’s most advanced visible-light astronomical observatory and two survey telescopes. VISTA works in the infrared and is the world’s largest survey telescope and the VLT Survey Telescope is the largest telescope designed to exclusively survey the skies in visible light. ESO is the European partner of a revolutionary astronomical telescope ALMA, the largest astronomical project in existence. ESO is currently planning a 40-metre-class European Extremely Large optical/near-infrared Telescope, the E-ELT, which will become “the world’s biggest eye on the sky”.

Photos of the VLT: http://www.eso.org/public/images/archive/search/?adv=&subject_name=Very%20Large%20Telescope

Other images taken with the VLT: http://www.eso.org/public/images/archive/search/?adv=&facility=31