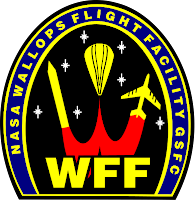 NASA technicians and engineers are putting the finishing touches on a unique experiment designed to demonstrate that an inflatable aeroshell/heat shield could be used to protect spacecraft when entering a planet's atmosphere or returning here to Earth.

IRVE-3 is one of NASA's many research efforts to develop new technologies to advance space travel. It's part of the Hypersonic Inflatable Aerodynamic Decelerator or HIAD project -- within the NASA Space Technology Program's Game Changing Development Program.

"We have developed a 10-foot (3 meters) diameter heat shield that we are packing -- uninflated -- into the 22-inch (56 centimeters) diameter nose cone of a three-stage Black Brant XI sounding rocket," said Robert Dillman, IRVE-3 chief engineer. The inflated structure will protect a payload that consists of four segments including the inflation system, steering mechanisms, telemetry equipment and camera gear. 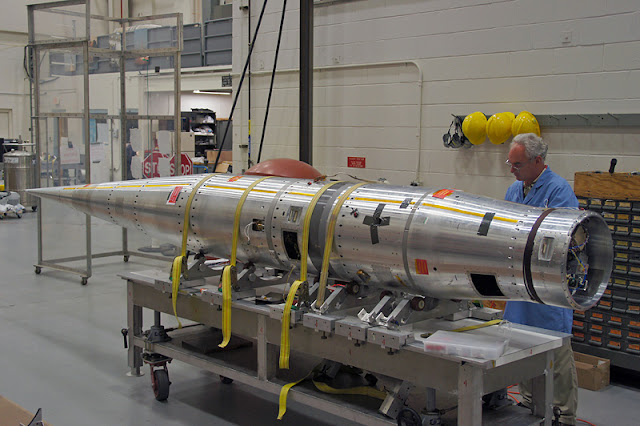 The heat shield is a cone of inflatable rings, which when filled with nitrogen look a little like a giant stacking ring toy or a mushroom. The rings are covered by a high-tech blanket or thermal protection system that is made up of layers of heat resistant materials. According to engineers fitting the inflatable structure into the rocket wasn't as difficult as folding up its cover.

"Packing actually turns out to be quite a challenge," said Neil Cheatwood, principal investigator for IRVE-3 and HIAD -- the Hypersonic Inflatable Aerodynamic Decelerator project that oversees the flight experiment. "One reason is because the IRVE-3 thermal protection system has this insulating layer of pyrogel -- an aerogel -- that is largely air. That makes it very difficult to compress. It's like trying to compress a sponge."

The IRVE-3 needs that kind of insulation because of the force of entry into Earth's atmosphere and temperatures that may reach as high as 1,850 degrees Fahrenheit (1,010 degrees Celsius). To achieve realistic reentry heating, the rocket will launch the inflatable spacecraft technology about 280 miles into the air. The 680-pound (308 kilograms) IRVE-3 will separate from the rocket and cutters will snip the strings on the inflatable's restraining bag, allowing the inflation system to pump the Kevlar rings to the right pressure. Then the inflatable heat shield and its payload will plummet back through Earth's atmosphere, splashing down in the Atlantic Ocean about 20 minutes after launch -- 350 miles (563 kilometers) down range from Wallops. 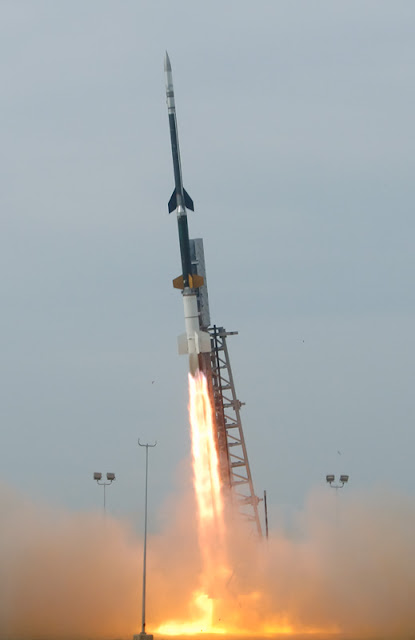 Image above: A three-stage Black Brant XI sounding rocket similar to this one will launch the Inflatable Reentry Vehicle Experiment (IRVE-3) about 280 miles (451 kilometers) into the air over the Atlantic Ocean. The IRVE-3 will separate from the nose cone, inflate and plummet back through Earth's atmosphere. Credit: NASA / Wallops Flight Facility.

During reentry four video cameras will transmit images to the Wallops control room to confirm that the IRVE-3 is holding its shape. Instruments on board will also send temperature and pressure data to researchers.

It sounds so simple when the engineers describe it, but nothing could be further from the truth. Way before launch day there have been literally years of designing, fabricating and testing to try to make sure everything goes right. About 50 people have worked for more than three years to make the experiment happen. 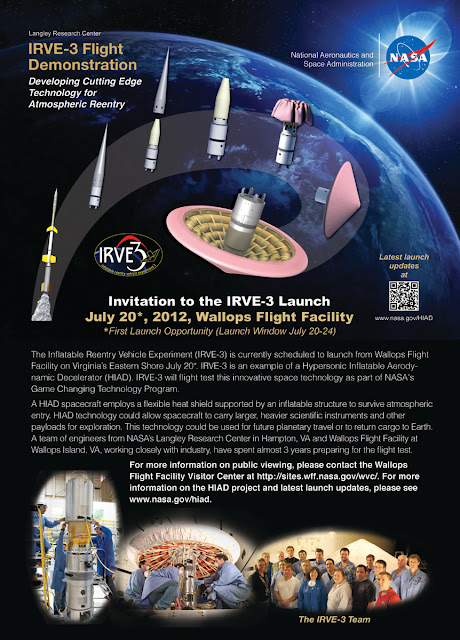 "We like it when it looks simple," said Carrie Rhoades, flight systems engineer. "It actually took quite a bit of work to get to where we are now. We have to do all kinds of different testing -- in wind tunnels, high temperature facilities and laboratories."

This will be the third IRVE suborbital flight. But why pursue inflatable spacecraft technology development in the first place? According to engineers such a system could offer more flexibility for future missions, by reducing some of the size and weight restrictions that are part of the rigid aeroshells we currently use for planetary exploration. An inflatable heat shield could accommodate larger payloads that could deliver more science instruments to other worlds and allow us to land at higher elevations on planets such as Mars or bring gear safely back from the International Space Station.