Video above: The RBSP mission begins with a thundering liftoff from SLC-41 at Cape Canaveral AFS on Aug. 30, 2012.

"Scientists will learn in unprecedented detail how the radiation belts are populated with charged particles, what causes them to change and how these processes affect the upper reaches of the atmosphere around Earth," said John Grunsfeld, associate administrator for NASA's Science Mission Directorate at Headquarters in Washington. "The information collected from these probes will benefit the public by allowing us to better protect our satellites and understand how space weather affects communications and technology on Earth." 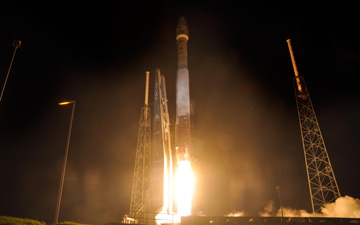 The two satellites, each weighing just less than 1,500 pounds, comprise the first dual-spacecraft mission specifically created to investigate this hazardous regions of near-Earth space, known as the radiation belts. These two belts, named for their discoverer, James Van Allen, encircle the planet and are filled with highly charged particles. The belts are affected by solar storms and coronal mass ejections and sometimes swell dramatically. When this occurs, they can pose dangers to communications, GPS satellites and human spaceflight.

"We have never before sent such comprehensive and high-quality instruments to study high radiation regions of space," said Barry Mauk, RBSP project scientist at the Johns Hopkins University's Applied Physics Laboratory (APL) in Laurel, Md. "RBSP was crafted to help us learn more about, and ultimately predict, the response of the radiation belts to solar inputs."

The hardy RBSP satellites will spend the next 2 years looping through every part of both Van Allen belts. By having two spacecraft in different regions of the belts at the same time, scientists finally will be able to gather data from within the belts themselves, learning how they change over space and time. Designers fortified RBSP with special protective plating and rugged electronics to operate and survive within this punishing region of space that other spacecraft avoid. In addition, a space weather broadcast will transmit selected data from those instruments around the clock, giving researchers a check on current conditions near Earth. 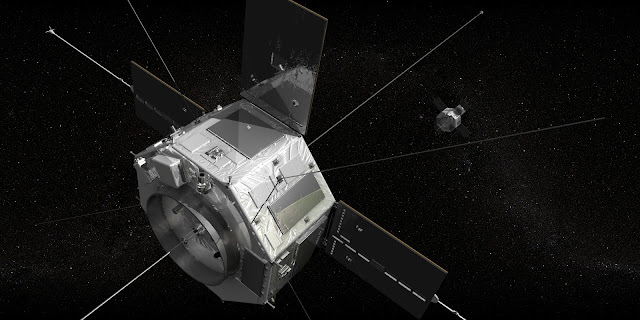 An artist's rendition of what the two Radiation Belt Storm Probe spacecraft will look like in space. Credit: NASA/Goddard Space Flight Center.

"The excitement of seeing the spacecraft in orbit and beginning to perform science measurements is like no other thrill," said Richard Fitzgerald, RBSP project manager at APL. "The entire RBSP team, from across every organization, worked together to produce an amazing pair of spacecraft."

RBSP was lifted into orbit aboard an Atlas V 401 rocket from Space Launch Complex-41, as the rocket's plume lit the dark skies over the Florida coast. The first RBSP spacecraft is scheduled to separate from the Atlas rocket's Centaur booster 1 hour, 18 minutes, 52 seconds after launch. The second RBSP spacecraft is set to follow 12 minutes, 14 seconds later. Mission controllers using APL's 60-foot satellite dish will establish radio contact with each probe immediately after separation.

Video above: The spacecraft have successfully separated from the Centaur upper stage.

During the next 60 days, operators will power up all flight systems and science instruments and deploy long antenna booms, two of which are more than 54 yards long. Data about the particles that swirl through the belts, and the fields and waves that transport them, will be gathered by five instrument suites designed and operated by teams at the New Jersey Institute of Technology in Newark; the University of Iowa in Iowa City; University of Minnesota in Minneapolis; and the University of New Hampshire in Durham; and the National Reconnaissance Office in Chantilly, Va. The data will be analyzed by scientists across the nation almost immediately.

The Electric Atmosphere: Plasma Is Next NASA Science Target 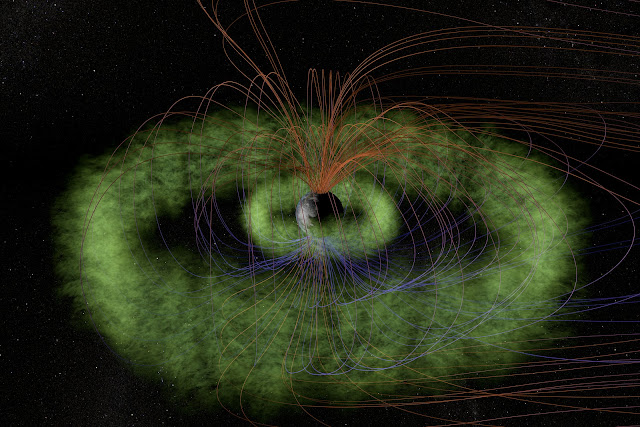 Image above: Two giant donuts of this plasma surround Earth, trapped within a region known as the Van Allen Radiation Belts. The belts lie close to Earth, sandwiched between satellites in geostationary orbit above and satellites in low Earth orbit (LEO) are generally below the belts. A new NASA mission called the Radiation Belt Storm Probes (RBSP), due to launch in August 2012, will improve our understanding of what makes plasma move in and out of these electrified belts wrapped around our planet. 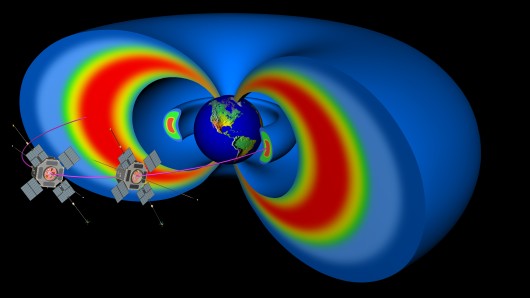 RBSP is the second mission in NASA's Living With a Star (LWS) program to explore aspects of the connected sun-Earth system that directly affect life and society. LWS is managed by the agency's Goddard Space Flight Center in Greenbelt, Md. APL built the RBSP spacecraft and will manage the mission for NASA. NASA's Launch Services Program at Kennedy is responsible for launch management. United Launch Alliance provided the Atlas V launch service.