Astronomers using data from NASA's Fermi Gamma-ray Space Telescope have made the most accurate measurement of starlight in the universe and used it to establish the total amount of light from all of the stars that have ever shone, accomplishing a primary mission goal.

"The optical and ultraviolet light from stars continues to travel throughout the universe even after the stars cease to shine, and this creates a fossil radiation field we can explore using gamma rays from distant sources," said lead scientist Marco Ajello, a postdoctoral researcher at the Kavli Institute for Particle Astrophysics and Cosmology at Stanford University in California and the Space Sciences Laboratory at the University of California at Berkeley.


Video above: This animation tracks several gamma rays through space and time, from their emission in the jet of a distant blazar to their arrival in Fermi's Large Area Telescope (LAT). During their journey, the number of randomly moving ultraviolet and optical photons (blue) increases as more and more stars are born in the universe. Eventually, one of the gamma rays encounters a photon of starlight and the gamma ray transforms into an electron and a positron. The remaining gamma-ray photons arrive at Fermi, interact with tungsten plates in the LAT, and produce the electrons and positrons whose paths through the detector allows astronomers to backtrack the gamma rays to their source. (Credit: NASA's Goddard Space Flight Center/Cruz deWilde).

Gamma rays are the most energetic form of light. Since Fermi's launch in 2008, its Large Area Telescope (LAT) observes the entire sky in high-energy gamma rays every three hours, creating the most detailed map of the universe ever known at these energies. 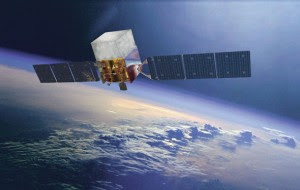 The total sum of starlight in the cosmos is known to astronomers as the extragalactic background light (EBL). To gamma rays, the EBL functions as a kind of cosmic fog. Ajello and his team investigated the EBL by studying gamma rays from 150 blazars, or galaxies powered by black holes, that were strongly detected at energies greater than 3 billion electron volts (GeV), or more than a billion times the energy of visible light.

"With more than a thousand detected so far, blazars are the most common sources detected by Fermi, but gamma rays at these energies are few and far between, which is why it took four years of data to make this analysis," said team member Justin Finke, an astrophysicist at the Naval Research Laboratory in Washington. 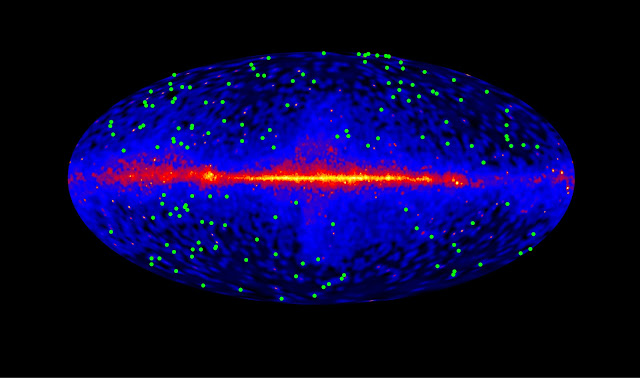 Image above: This plot shows the locations of 150 blazars (green dots) used in the EBL study. The background map shows the entire sky and was constructed from four years of gamma rays with energies above 10 billion electron volts (GeV) detected by Fermi. The plane of our Milky Way galaxy runs along the middle of the plot. The Fermi LAT instrument is the first to detect more than 500 sources in this energy range. (Credit: NASA/DOE/Fermi LAT Collaboration).

As matter falls toward a galaxy's supermassive black hole, some of it is accelerated outward at almost the speed of light in jets pointed in opposite directions. When one of the jets happens to be aimed in the direction of Earth, the galaxy appears especially bright and is classified as a blazar.

Gamma rays produced in blazar jets travel across billions of light-years to Earth. During their journey, the gamma rays pass through an increasing fog of visible and ultraviolet light emitted by stars that formed throughout the history of the universe.

Occasionally, a gamma ray collides with starlight and transforms into a pair of particles -- an electron and its antimatter counterpart, a positron. Once this occurs, the gamma ray light is lost. In effect, the process dampens the gamma ray signal in much the same way as fog dims a distant lighthouse.

From studies of nearby blazars, scientists have determined how many gamma rays should be emitted at different energies. More distant blazars show fewer gamma rays at higher energies -- especially above 25 GeV -- thanks to absorption by the cosmic fog. 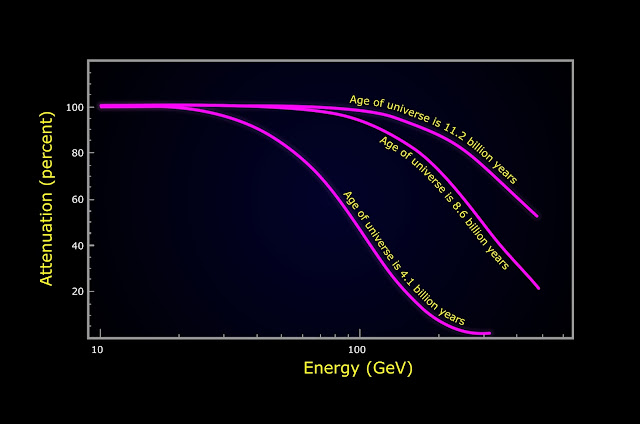 Graphic above: Fermi measured the amount of gamma-ray absorption in blazar spectra produced by ultraviolet and visible starlight at three different epochs in the history of the universe. (Credit: NASA's Goddard Space Flight Center).

The farthest blazars are missing most of their higher-energy gamma rays.

The researchers then determined the average gamma-ray attenuation across three distance ranges between 9.6 billion years ago and today.

From this measurement, the scientists were able to estimate the fog's thickness. To account for the observations, the average stellar density in the cosmos is about 1.4 stars per 100 billion cubic light-years, which means the average distance between stars in the universe is about 4,150 light-years.

A paper describing the findings was published Thursday on Science Express.

"The Fermi result opens up the exciting possibility of constraining the earliest period of cosmic star formation, thus setting the stage for NASA's James Webb Space Telescope," said Volker Bromm, an astronomer at the University of Texas, Austin, who commented on the findings. "In simple terms, Fermi is providing us with a shadow image of the first stars, whereas Webb will directly detect them." 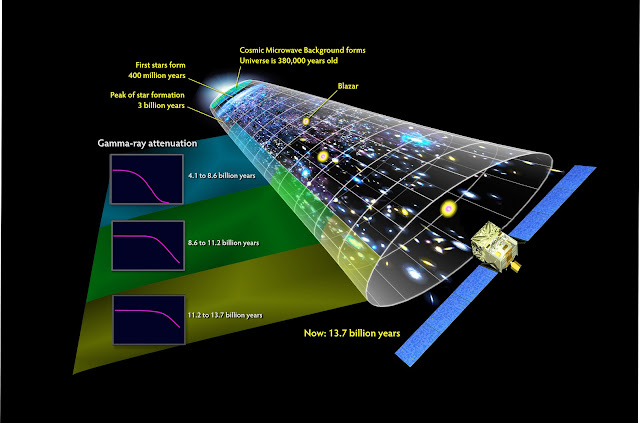 This illustration places the Fermi measurements in perspective with other well-known features of cosmic history. Star formation reached a peak when the universe was about 3 billion years old and has been declining ever since. (Credit: NASA's Goddard Space Flight Center).

Measuring the extragalactic background light was one of the primary mission goals for Fermi.

Goddard manages the Fermi astrophysics and particle physics research partnership. Fermi was developed in collaboration with the U.S. Department of Energy with contributions from academic institutions and partners in France, Germany, Italy, Japan, Sweden and the United States.