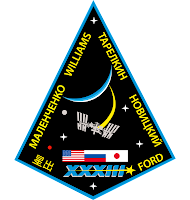 During the spacewalk, Williams and Hoshide are venturing out to the port side of the station’s truss to configure the 2B solar array power channel’s photovoltaic thermal control system (PVTCS) to support ground-based troubleshooting of an ammonia leak. 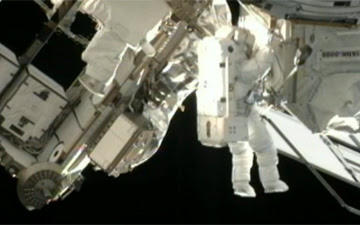 The spacewalking duo will isolate the photovoltaic radiator on the P6 truss from the PVTCS, shutting off the flow of ammonia in and out of it and rerouting the ammonia flow through a spare radiator so the PVTCS can continue operation. Over the following weeks and months, flight controllers at Mission Control Houston will monitor telemetry to see if the leak continues.

If rerouting the ammonia through the spare radiator stops the leak, mission managers will evaluate whether to leave the fix as-is or replace the photovoltaic radiator on a future spacewalk. If the leak continues, additional troubleshooting will be required. 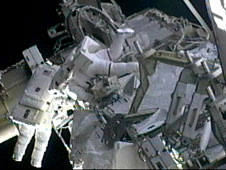 Williams, who is the lead for this spacewalk, is wearing the suit with red stripes. This is the seventh spacewalk for Williams who holds the record for spacewalking time for female astronauts with over 44 hours during six previous excursions. Hoshide, who is making his third spacewalk, now holds the equivalent record for Japanese astronauts.

This is the 166th spacewalk in support of International Space Station assembly and maintenance and the 138th spacewalk from the station. 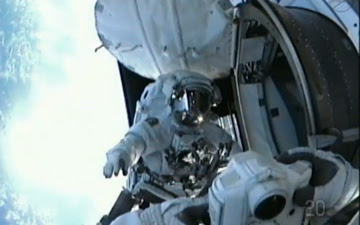 Image above: Expedition 33 Astronaut works outside the space station during a November 1 spacewalk.

Last night, thrusters on the ISS Progress 48 cargo ship at the Pirs Docking Compartment were used to raise the station’s altitude in a debris avoidance maneuver to steer clear of a small fragment of debris from the Iridium 33 satellite. Only one set of thrusters on a single manifold was used to execute the reboost at 6:08 p.m. CDT instead of the planned both sets of thrusters on two manifolds, resulting in a slightly reduced altitude change. The single manifold selection was the result of a software configuration, but the burn lasted 10 minutes in duration and was automatically terminated by thruster cut off limits.

Despite the fact that the maneuver achieved only about 72 percent of the planned altitude change, the goal of maneuvering away from the debris was accomplished and no additional maneuver is required.

For information on the International Space Station (ISS), visit: http://www.nasa.gov/station