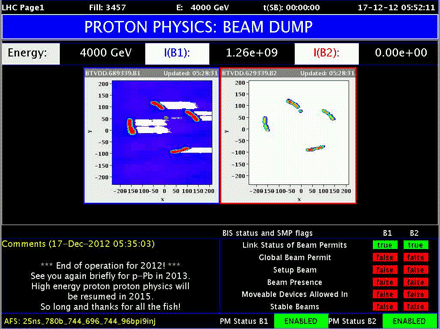 Image above: The final beam of the three-year proton run at the LHC is dumped, with the phrase "So long and thanks for all the fish" from the control team (Image: CERN).

This morning CERN teams brought the first proton run at the Large Hadron Collider to and end with the message "So long and thanks for all the fish," - a phrase made famous by British writer Douglas Adams in his Hitchhiker's Guide to the Galaxy series. The remarkable first three-year run of the world's most powerful particle accelerator was crowned by a new performance milestone. The space between proton bunches in the beams was halved to further increase beam intensity and the accelerator's luminosity.

"This new achievement augurs well for the next LHC run starting in 2015," says CERN's head of accelerators and technology, Steve Myers. "High-intensity beams are vital for the success of the LHC programme. More intense beams mean more collisions and a better chance of observing rare phenomena."

Of the 6 million billion proton-proton collisions generated by the LHC, the ATLAS and CMS experiments have each recorded around 5 billion collisions of interest over the last three years. Of these, only around 400 produced signatures compatible with the Higgs-like particle whose discovery was announced in July. 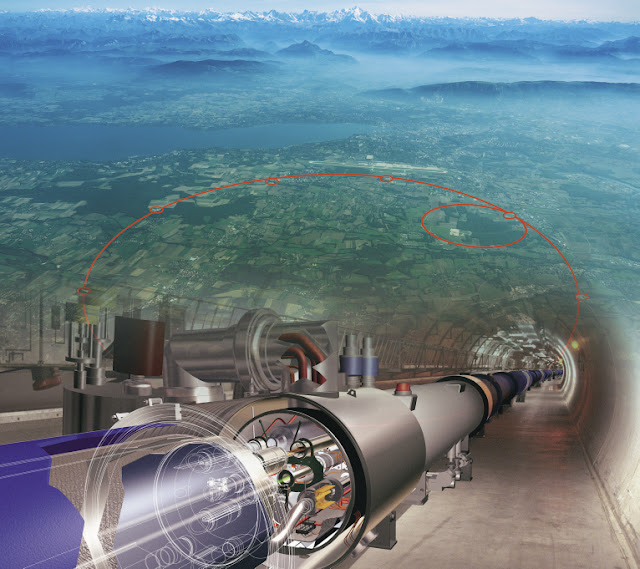 1. CERN, the European Organization for Nuclear Research, is the world's leading laboratory for particle physics. It has its headquarters in Geneva. At present, its Member States are Austria, Belgium, Bulgaria, the Czech Republic, Denmark, Finland, France, Germany, Greece, Hungary, Italy, the Netherlands, Norway, Poland, Portugal, Slovakia, Spain, Sweden, Switzerland and the United Kingdom. Romania is a candidate for accession. Israel is an Associate Member in the pre-stage to Membership. India, Japan, the Russian Federation, the United States of America, Turkey, the European Commission and UNESCO have Observer status.

Hitchhiker's Guide to the Galaxy: http://en.wikipedia.org/wiki/The_Hitchhiker%27s_Guide_to_the_Galaxy