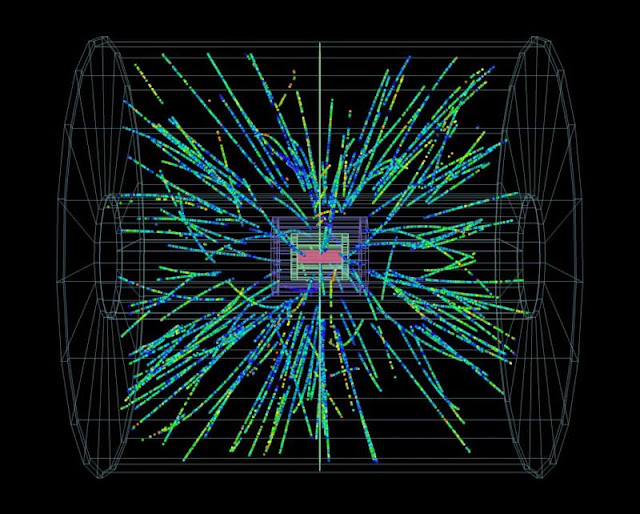 Image above: The first proton-lead collisions of 2013 send showers of particles through the ALICE detector (Image: CERN).

At 3.08pm yesterday, after a week of tests with beams of protons and lead ions, the Large Hadron Collider (LHC) team declared "stable beams" as protons collided with lead ions in the first LHC physics beams of 2013.

"The declaration of stable beams for collisions at a new energy, or with new particles colliding, always produces a feeling of elation as a new physics domain is opened up for exploration," says accelerator physicist John Jowett of the LHC’s heavy-ion team. "In this case, the boost in energy with respect to previous collisions of a similar type is a factor of 25 – one of the largest such gains in the history of particle accelerators. It’s wonderful that many young physicists and engineers who made vital contributions can experience this at the LHC."

Reyes Alemany Fernández of the LHC operations group says the declaration of stable beams feels likes a welcome break in a difficult journey."But there are challenges ahead," she says.

To maximize the collision rate in more experiments than ever before, Jorg Wenninger of the LHC operations group led the commissioning of a new “squeeze”, the 15-minute phase at 4 TeV that focuses the beams down to a size of about 25 micrometres at the interaction points.

The counter-rotating beams of protons and lead ions started in the LHC on centred orbits with different revolution frequencies, and were ramped separately to the accelerator's maximum collision energy. "Before physics the two beams are locked to a common frequency, then gently rotated to achieve encounters in the centre of the detectors," says Philippe Baudrenghien of the Radiofrequency group. "This 'cogging' mechanism is unique to the proton-ion operation.” The resulting collisions sent showers of particles through the detectors ATLAS, CMS, LHCb and ALICE.

Setting up the proton and lead-ion beams after the end-of-year technical stop went smoothly, says Jowett, thanks to the dedication of the teams working on the injectors. "The Linac 3 team kept the lead source running throughout the technical stop and recovery of the accelerator complex was rapid," he says. "The new proton and lead beams were soon ready in their parallel chains of injectors, with a bunch filling pattern that ensures they will match up in the LHC.  The LEIR machine even attained a new ion-beam intensity record."

The collisions mark the start of a lead-proton run that is set to continue until February, when the LHC begins its two-year shutdown. 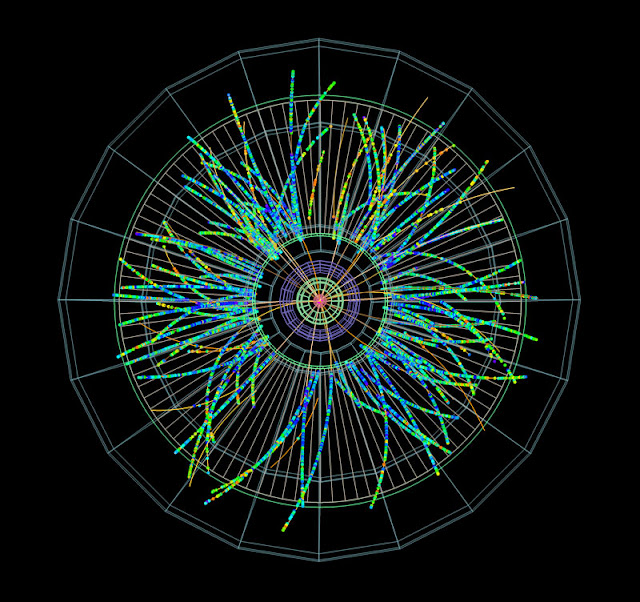 Image above: Protons collide with lead ions in the ALICE dectector in the first LHC physics beams of 2013 (Image: CERN).

ALICE, a specialized heavy-ion detector on the LHC, will be watching the lead-proton collisions closely to tease out the effects of lead ions from the effects of quark-gluon plasma. The LHC experiments ATLAS, CMS and LHCb are also taking data.

On Sunday afternoon the control team for the Large Hadron Collider (LHC) brought protons into collision with lead ions for the LHC's first physics beams of 2013. The collisions were the first in a lead-proton run that is set to continue until February, when the LHC begins its two-year shutdown.

The LHC experiments ALICE, ATLAS, CMS and LHCb are all still taking data. ALICE is specialized in scrutinizing heavy-ion collisions to investigate the properties of the elusive quark-gluon plasma, the primordial state of matter that existed in the first moments after the big bang, just before the phase transition to matter made of nucleons (protons and neutrons). 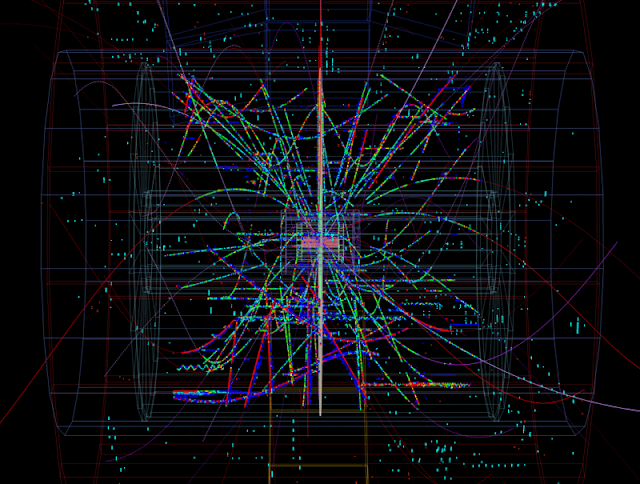 Proton collisions with lead ions in the ALICE detector. Photo taken at the trial run of September 2012 (Image: CERN)

The LHC usually collides protons or lead ions. To study quark-gluon plasma, physicists need to create the high-temperature matter that is formed in the collisions of heavy ions. In lead-lead collisions ALICE physicists can deduce some properties of the plasma - from its effect on particles moving through it, for instance. But they also need to distinguish effects caused by the hot plasma from effects caused by the cold nuclear matter that makes up lead nuclei.

In the current run, the LHC is colliding protons with lead ions, which are made of 208 nucleons. Comparing the results of lead-proton collisions to those of lead-lead collisions will help ALICE physicists to decouple the effects of the plasma from effects that stem from having lead ions in the initial state.

"The lead-proton run will help us to understand the complexity of the lead-lead interaction at many levels," says ALICE physicist Despina Hatzifotiadou. "There is somehow a missing link in the game: We know that the configurations of the quarks and gluons that make up the protons and neutrons of the incoming lead nucleus can be somewhat different from the configurations of the quarks and gluons of the incoming protons. We want to measure if part of the effects we find when comparing lead-lead and proton-proton collisions is due to this configuration difference rather than the formation of the plasma. Proton-lead collisions, where we do not expect formation of quark-gluon plasma but we do have an incoming lead nucleus, are an ideal tool for this study."

Hatzifotiadou says the data from the lead-proton collisions will represent an ultimate benchmark to fully understand results from lead-lead collisions. "It will allow physicists to decouple the cold nuclear matter effects and thus will shed light on our study of the quark-gluon plasma," she says.

More on this story: "A bullet though an apple" – symmetry: http://www.symmetrymagazine.org/article/january-2013/a-bullet-through-an-apple