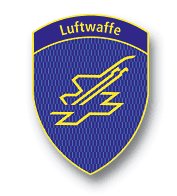 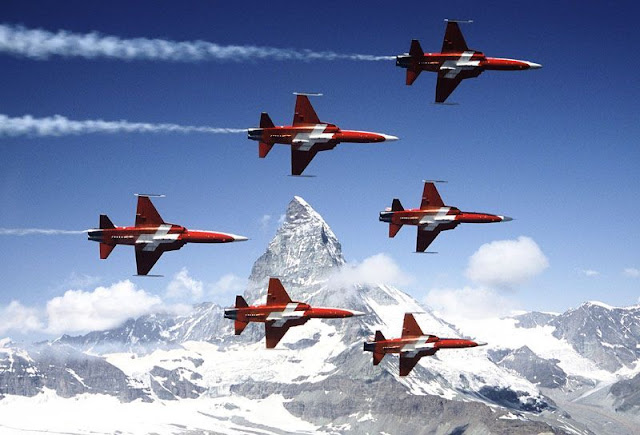 What are the problems of the Patrouille Suisse:

The reasons cited by the defense minister are once again wrong. The annual cost of this patrol is ridiculous expense comparisons other military spendings, and I want to reiterate that the Patrouille Suisse is very popular in Switzerland and abroad, or they are the "card" of our Air Force and our entire army as the military band (Military Tatoo) who are our only two ambassadors of the Swiss Army. 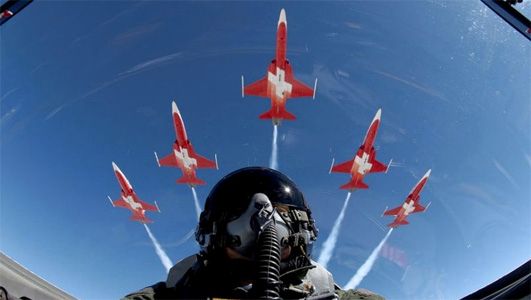 The Patrouille Suisse viewed inside the cockpit of the leader solo

We never see the Swiss military abroad (apart from the Vatican Guard in Roma and KFOR in Kosovo), because Switzerland is a neutral country and our army only defensive.

The real reasons he has mentioned himself during his interview with Swiss television, the Minister issues are simple:

- Not enough money for its proposed purchase of Gripen, because he knows that the total cost of the Gripen will be much higher than the advertised price in Swiss people and parliamentarians, in fact, any military aviation specialist you say that the proposed purchase of Gripen aircraft (for more information on this project, see my previous article) is worse and more expensive first officially announced (4 billion will be reached), the initial budget more 3.1 Billion has already been revised upwards twice, we get now more than 3.5 billion (all amounts are expressed in Swiss Francs).

- Not enough aircraft, 22 aircraft will be ordered to replace provided aerial surveillance of Switzerland sky and he has already reduced the activity to office hours (07:00-19:00), as customs officials... Personally, I did not know that the Schengen agreements included airspace ... This is new? 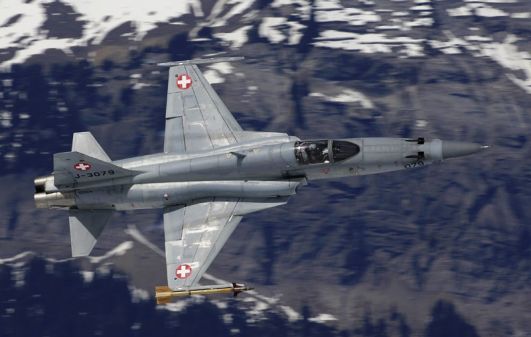 The real problem is just a matter of calculation: there are 42 Northrop F-5E Tiger II still in service, this aircraft is to be replaced by Gripen, if one incorporates the Patrouille Suisse 11 aircraft made by the Gripen, there will be more than 11 aircraft to ensure air monitoring in the country and it is not enough if one takes into account the rotation of service units (flight hours and ground maintenance and revisions).

Founded in 1963, the Patrouille Suisse is like all patrols made famous the "cream" of the countrie pilots. 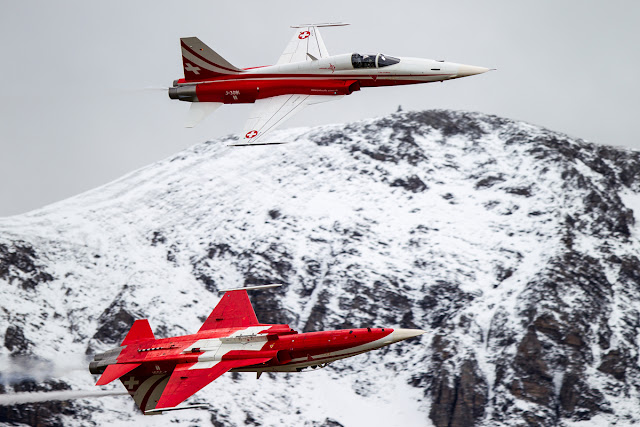 Controversies are recurrent in Switzerland each new aircraft purchases in 1973 when evaluating the Northrop F-5E Tiger II (98 aircafts total purchased) they have been the same kinds of problems that currently, except that in is era, the minister in place had the decency not to use this file for personal, in order to justify one sucked (purchase of Gripen) to ministry mandate forgotten more than lukewarm ... All this at the expense of the country's security and military morale (they have at the bottom of the military boots "Ranger's").

So with the purchase of Gripen aircraft we have the worst performer of his generation, he does not exist (E/F model), it has never been tested, it will be much more expensive than expected, there will not be enough planes to replace those currently in use, so no more Patrouille Suisse ... Where are the positive choice of Gripen?

The film "Tigris Helveticus" produced by the Swiss army in 1981, demonstrates that there has been controversy in these years about buying the Northrop F-5E Tiger II, as today Gripen and Rafale. Note that the fighters Saab 37 Viggen and the Mirage F-1 (Saab / Dassault) was already present in the 4 planes tested had at that time. 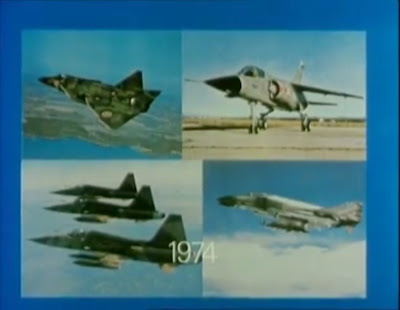 Furthermore, seen from abroad, we go for the Gripen with horns, this is probably one of the reasons why some countries (apart from the Swedish Air Force, which as all aircraft manufacturers in their own country team) I mean the Gripen model "E/F", because as I've written before, this plane does not yet exist, it is in the development stage. I do not know which countries buy a ghost plane ... If! the Swiss!

Link to my previous article about the purchase of a new fighter aircraft for the Swiss Air Force:
http://orbiterchspacenews.blogspot.ch/2013/01/choice-of-new-fighter-aircraft-of-swiss.html