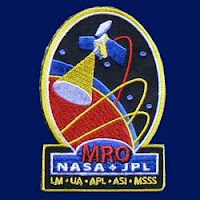 The spacecraft took numerous images during the past few years that showed channels attributed to catastrophic flooding in the last 500 million years. Mars during this period had been considered cold and dry. These channels are essential to understanding the extent to which recent hydrologic activity prevailed during such arid conditions. They also help scientists determine whether the floods could have induced episodes of climate change. 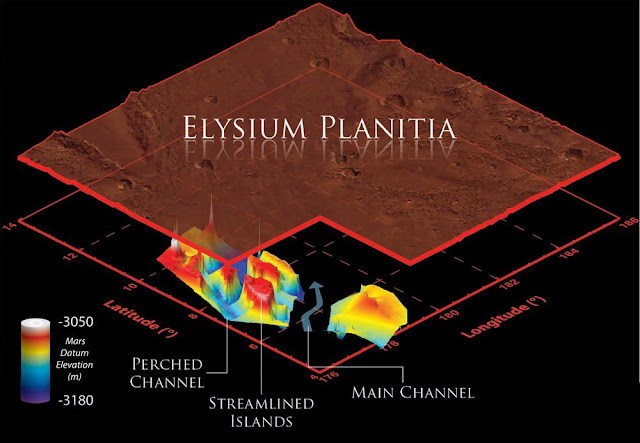 The estimated size of the flooding appears to be comparable to the ancient mega flood that created the Channeled Scablands in the Pacific Northwest region of the United States in eastern Washington.

The findings are reported in the March 7 issue of Science Express by a team of scientists from NASA, the Smithsonian Institution, and the Southwest Research Institute in Houston.

"Our findings show the scale of erosion that created the channels previously was underestimated and the channel depth was at least twice that of previous approximations," said Gareth Morgan, a geologist at the National Air and Space Museum's Center for Earth and Planetary Studies in Washington and lead author on the paper. "This work demonstrates the importance of orbital sounding radar in understanding how water has shaped the surface of Mars."

The channels lie in Elysium Planitia, an expanse of plains along the Martian equator and the youngest volcanic region on the planet. Extensive volcanism throughout the last several hundred million years covered most of the surface of Elysium Planitia, and this buried evidence of Mars' older geologic history, including the source and most of the length of the 620-mile-long (1000-kilometer-long) Marte Vallis channel system. To probe the length, width and depth of these underground channels, the researchers used MRO's Shallow Radar (SHARAD). 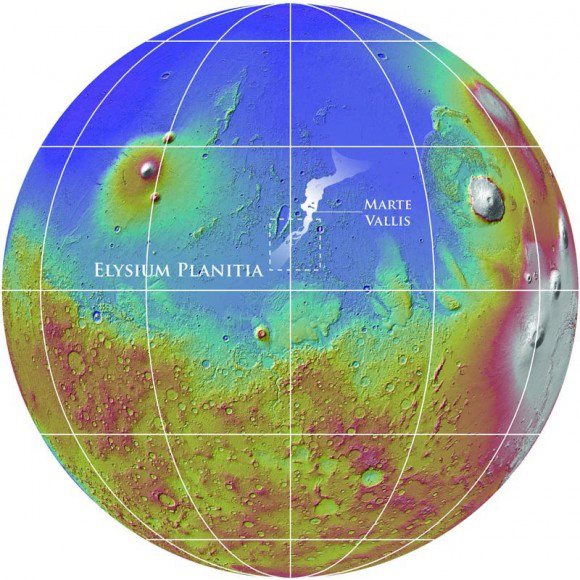 Image above: Massive floodwaters on Mars gouged a channel more than 600 miles (1,000 kilometers) long, making a trench that was hidden to scientists until now because volcanic flows buried it underground. Erupting groundwater, perhaps triggered by a volcano or an earthquake, forced water across the surface during the past 500 million years.

Marte Vallis' morphology is similar to more ancient channel systems on Mars, especially those of the Chryse basin. Many scientists think the Chryse channels likely were formed by the catastrophic release of ground water, although others suggest lava can produce many of the same features. In comparison, little is known about Marte Vallis.

With the SHARAD radar, the team was able to map the buried channels in three dimensions with enough detail to see evidence suggesting two different phases of channel formation. One phase etched a series of smaller branching, or "anastomosing," channels that are now on a raised "bench" next to the main channel. These smaller channels flowed around four streamlined islands. A second phase carved the deep, wide channels. 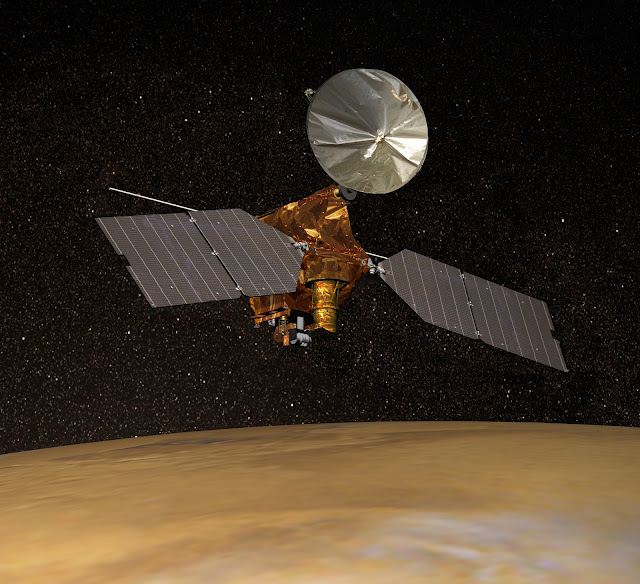 "In this region, the radar picked up multiple 'reflectors,' which are surfaces or boundaries that reflect radio waves, so it was possible to see multiple layers, " said Lynn Carter, the paper's co-author from NASA's Goddard Space Flight Center in Greenbelt, Md. "We have rarely seen that in SHARAD data outside of the polar ice regions of Mars."

The mapping also provided sufficient information to establish the floods that carved the channels originated from a now-buried portion of the Cerberus Fossae fracture system. The water could have accumulated in an underground reservoir and been released by tectonic or volcanic activity.

"While the radar was probing thick layers of dry, solid rock, it provided us with unique information about the recent history of water in a key region of Mars," said co-author Jeffrey Plaut of NASA's Jet Propulsion Laboratory (JPL), Pasadena, Calif.

The 3-D image can be viewed online at: http://photojournal.jpl.nasa.gov/catalog/PIA16767