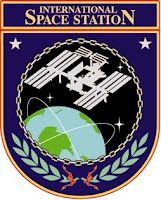 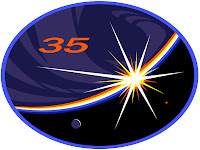 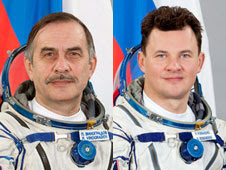 Two members of the Expedition 35 crew wrapped up a 6-hour, 38 minute spacewalk at 4:41 p.m. EDT Friday to deploy and retrieve several science experiments on the exterior of the International Space Station and install a new navigational aid.

Russian Flight Engineers Pavel Vinogradov and Roman Romanenko opened the hatch to the Pirs airlock and docking compartment to start the spacewalk at 10:03 a.m. 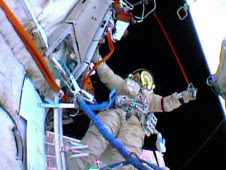 The spacewalkers' first task was to install the Obstanovka experiment on the station's Zvezda service module. Obstanovka will study plasma waves and the effect of space weather on Earth's ionosphere.

While at the far end of Zvezda, Vinogradov and Romanenko replaced a faulty retro-reflector device, one of a suite of navigational aids that will provide assistance to the European Space Agency's Albert Einstein Automated Transfer Vehicle 4 cargo ship during its final approach for an automated docking to the space station in June.

For their final task, the two spacewalkers translated to the Poisk module to retrieve one of two Vinoslivost Materials Sample Experiment panels from the Poisk module. As Vinogradov was removing the panel, it slipped out of his grasp and was irretrievable. The trajectory the panel took will move it away from the space station with no chance of the two making contact. 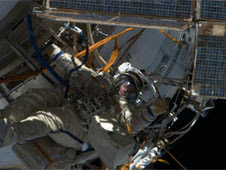 This was the first of as many as six Russian spacewalks planned for this year. Two U.S. spacewalks are scheduled in July.

During Friday’s spacewalk, Flight Engineers Alexander Misurkin and Chris Cassidy were restricted to their Soyuz TMA-08M spacecraft and the Poisk module to which it is docked. This is a standard procedure during Russian spacewalks as hatches are closed to protect the remainder of the station while still providing crew members access to their Soyuz vehicles. 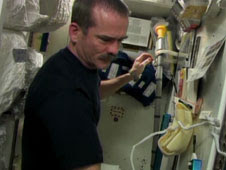 Commander Chris Cassidy and Flight Engineer Tom Marshburn, whose Soyuz TMA-07M spacecraft is docked to Rassvet module, had a freer run of the station, including the Zarya module and all modules on the U.S. side of the station. While Vinogradov and Romanenko performed their spacewalk outside the station, Hadfield and Marshburn continued scientific research and maintenance activities inside.

Marshburn delved into his first onboard session with the BP Reg, a Canadian medical experiment that seeks to understand the causes of fainting and dizziness seen in some station astronauts upon return to Earth. BP Reg collects data before, during and after the mission using inflatable cuffs attached to the legs. The experiment will not only help understand dizziness in astronauts, but also have direct benefits for people on Earth – particularly those predisposed to falls and resulting injuries, as seen in the elderly. 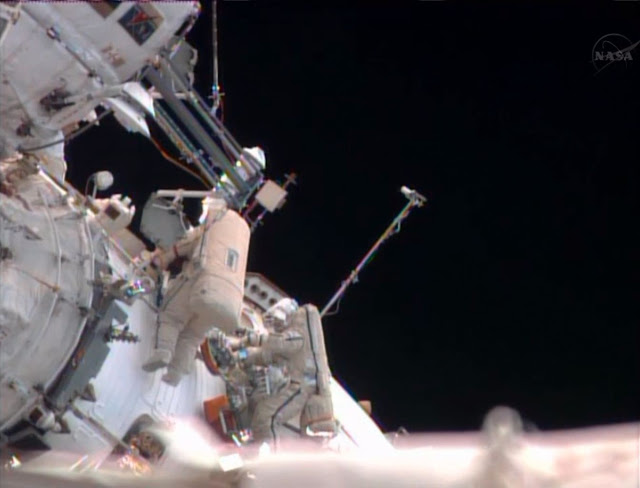 In this image made from video provided by NASA, Russian Cosmonauts Pavel Vinogradov, left, and Roman Romanenko perform a spacewalk outside the International Space Station to gather old science experiments and install new ones, and replace a navigation device. Image credit: NASA TV.

Marshburn also collected data from NanoRacks and transferred the data to a laptop computer. NanoRacks provides microgravity research facilities for small standardized payloads aboard the station. 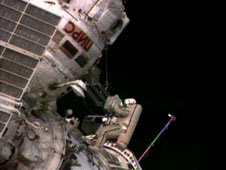 Flight Engineer Roman Romanenko works outside the Pirs docking compartment shortly after the start of the spacewalk. Credit: NASA TV.

Hadfield retrieved acoustic dosimeters that Cassidy deployed throughout the station Thursday and downloaded the data from these devices to track the noise levels that crew members are exposed to.

Hadfield also performed some maintenance on the Waste and Hygiene Compartment, one of the toilets aboard the station. The commander rounded out his workday loading software on a laptop computer associated with EXPRESS rack 8. Each of the eight EXPRESS racks aboard the complex provides simple, standard interfaces to accommodate up to ten small payloads, resulting in a total capability to operate up to 80 experiments. 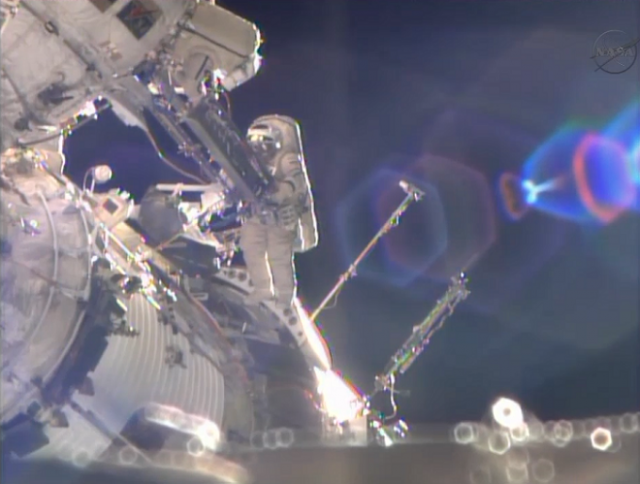 Over the weekend, the Russian crew members will spend some time drying out their Orlan spacesuits and stowing the tools used in Friday’s spacewalk. All six crew members will participate in weekly housekeeping tasks and enjoy some off-duty time to rest and catch up with friends and family back on Earth.