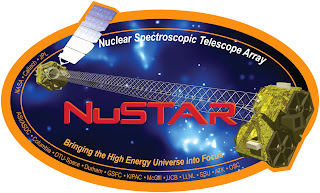 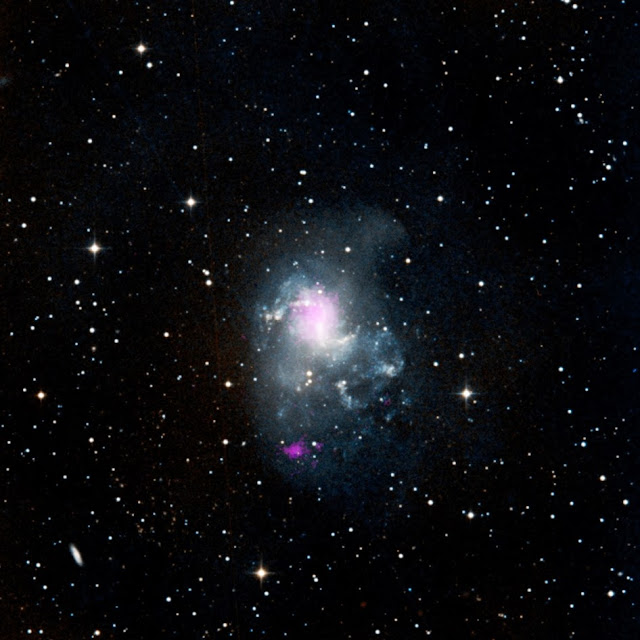 Image above: The magenta spots in this image show two black holes in the Circinus galaxy: the supermassive black hole at its heart, and a smaller one closer to the edge that belongs to a class called ultraluminous X-ray sources, or ULXs. Image credit: NASA/JPL-Caltech.

Black holes can be petite, with masses only about 10 times that of our sun -- or monstrous, boasting the equivalent in mass up to 10 billion suns. Do black holes also come in size medium? NASA's Nuclear Spectroscopic Telescope Array, or NuSTAR, is busy scrutinizing a class of black holes that may fall into the proposed medium-sized category.

"Exactly how intermediate-sized black holes would form remains an open issue," said Dominic Walton of the California Institute of Technology, Pasadena. "Some theories suggest they could form in rich, dense clusters of stars through repeated mergers, but there are a lot of questions left to be answered."

The largest black holes, referred to as supermassive, dominate the hearts of galaxies. The immense gravity of these black holes drags material toward them, forcing the material to heat up and release powerful X-rays. Small black holes dot the rest of the galactic landscape. They form under the crush of collapsing, dying stars bigger than our sun.

Evidence for medium-sized black holes lying somewhere between these two extremes might come from objects called ultraluminous X-ray sources, or ULXs. These are pairs of objects in which a black hole ravenously feeds off a normal star. The feeding process is somewhat similar to what happens around supermassive black holes, but isn't as big and messy. In addition, ULXs are located throughout galaxies, not at the cores.

The bright glow of X-rays coming from ULXs is too great to be the product of typical small black holes. This and other evidence indicates the objects may be intermediate in mass, with 100 to 10,000 times the mass of our sun. Alternatively, an explanation may lie in some kind of exotic phenomenon involving extreme accretion, or "feeding," of a black hole. 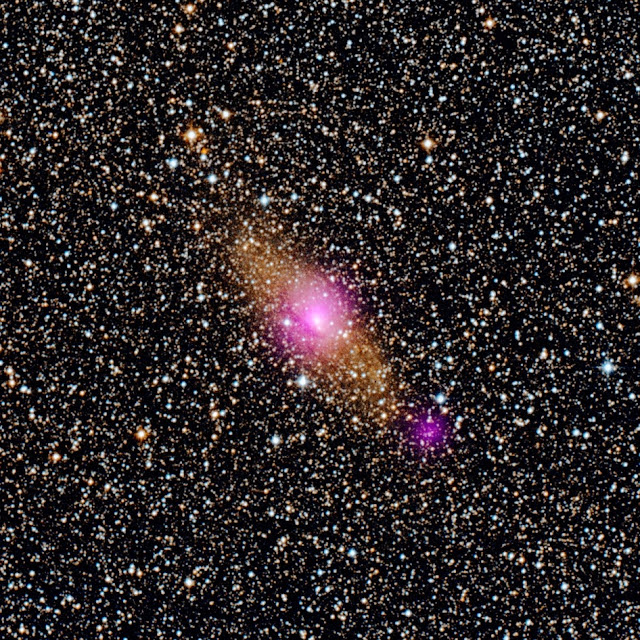 Black Holes of the Circinus Galaxy

Image above: The magenta spots in this image show two black holes in the spiral galaxy called NGC 1313, or the Topsy Turvy galaxy. Both black holes belong to a class called ultraluminous X-ray sources, or ULXs. Image credit: NASA/JPL-Caltech/IRAP.

NuSTAR is joining with other telescopes to take a closer look at ULXs. It’s providing the first look at these objects in focused, high-energy X-rays, helping to get better estimates of their masses and other characteristics.

In a new paper from Walton and colleagues accepted for publication in the Astrophysical Journal, the astronomers report serendipitously finding a ULX that had gone largely unnoticed before. They studied the object, which lies in the Circinus spiral galaxy 13 million light-years away, not only with NuSTAR but also with the European Space Agency's XMM-Newton satellite. Archival data from NASA's Chandra, Swift and Spitzer space telescopes as well as Japan's Suzaku satellite, were also used for further studies. "We went to town on this object, looking at a range of epochs and wavelengths," said Walton.

The results indicate the black hole in question is about 100 times the mass of the sun, putting it right at the border between small and medium black holes.

These are among the best-studied ULXs known. A single viewing with NuSTAR showed that the black holes didn't fit with models of medium-size black holes. As a result, the researchers now think both ULXs harbor small, stellar-mass black holes. One of the objects is estimated to be big for its size category, at 70 to 100 solar masses.

"It's possible that these objects are ultraluminous because they are accreting material at a high rate and not because of their size," said Bachetti. "If intermediate-mass black holes are out there, they are doing a good job of hiding from us."

NuSTAR's mission operations center is at UC Berkeley, with the ASI providing its equatorial ground station located at Malindi, Kenya. The mission's outreach program is based at Sonoma State University, Rohnert Park, Calif. NASA's Explorer Program is managed by Goddard. JPL is managed by Caltech for NASA.