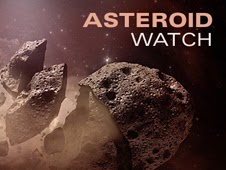 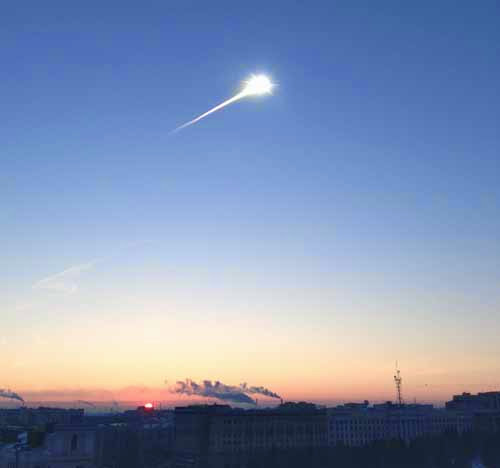 Image above: 2013, February 15, Snapshot of the Chelyabinsk firball in a photo by Evgeny Andreev. Photo: Eveny Andreev.

A team of NASA and international scientists for the first time have gathered a detailed understanding of the effects on Earth from a small asteroid impact.

The unprecedented data obtained as the result of the airburst of a meteoroid over the Russian city of Chelyabinsk on Feb. 15, has revolutionized scientists' understanding of this natural phenomenon.

The Chelyabinsk incident was well observed by citizen cameras and other assets. This factor provided a unique opportunity for researchers to calibrate the event, with implications for the study of near-Earth objects (NEOs) and the development of hazard mitigation strategies for planetary defense. Scientists from nine countries now have established a new benchmark for future asteroid impact modeling. 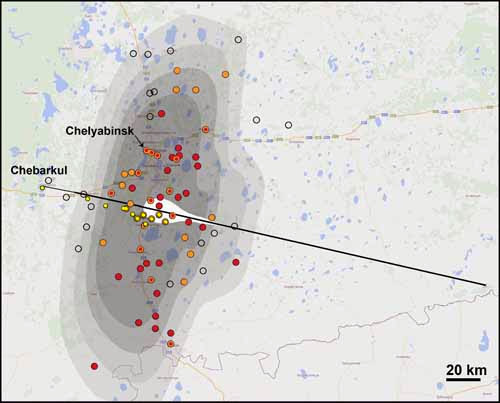 Image above: Map of glass damage in Chelyabinsk Oblast. Fireball moved from right to left. Dots are villages and towns in the area, marked red or orange when glass damage occurred. Yellow dots are the locations where meteorites were recovered. Gray area shows predictions of overpressure from asteroid impact models. From: Popova et al. (2013).

"Our goal was to understand all circumstances that resulted in the shock wave," said meteor expert Peter Jenniskens, co-lead author of a report published in the journal Science.

Jenniskens, a meteor astronomer at NASA’s Ames Research Center and the SETI Institute, participated in a field study led by Olga Popova of the Institute for Dynamics of Geospheres of the Russian Academy of Sciences in Moscow in the weeks following the event.

“It was important that we followed up with the many citizens who had firsthand accounts of the event and recorded incredible video while the experience was still fresh in their minds," said Popova.

By calibrating the video images from the position of the stars in the night sky, Jenniskens and Popova calculated the impact speed of the meteor at 42,500 mph (19 kilometers per second). As the meteor penetrated through the atmosphere, it fragmented into pieces, peaking at 19 miles (30 kilometers) above the surface. At that point the superheated meteor appeared brighter than the sun, even for people 62 miles (100 kilometers) away.

Because of the extreme heat, many pieces of the meteor vaporized before reaching Earth. Scientists believe that between 9,000 to 13,000 pounds (4,000 to 6,000 kilograms) of meteorites fell to the ground. This amount included one fragment weighing approximately 1,400 pounds (650 kilograms). This fragment wasrecovered from Lake Chebarkul on Oct. 16 by professional divers guided by Ural Federal University researchers in Yekaterinburg, Russia.

NASA researchers participating in the 59 member consortium study suspect the abundance of shock fractures in the rock contributed its breakup in the upper atmosphere. Meteorites made available by Chelyabinsk State University researchers were analyzed to learn about the origin of the shock veins and their physical properties. Shock veins are caused by asteroid collisions. When asteroid collide with each other, heat generated by the impact causes iron and nickel components of the objects to melt. These melts cool into thin masses, forming metal veins – shock veins – in the objects.

"One of these meteorites broke along one of these shock veins when we pressed on it during our analysis," said Derek Sears, a meteoriticist at Ames.

Mike Zolensky, a cosmochemist at NASA’s Johnson Space Center in Houston, may have found why these shock veins (or shock fractures), were so frail. They contained layers of small iron grains just inside the vein, which had precipitated out of the glassy material when it cooled.

"There are cases where impact melt increases a meteorite's mechanical strength, but Chelyabinsk was weakened by it," said Zolensky.

Image above: Point of main disruption of the Chelyabinks fireball at 27 km altitude. Photo: M. Ahmetvaleev.

The impact that created the shock veins may have occurred as long ago as 4.4 billion years. This would have been 115 million years after the formation of the solar system, according to the research team, who found the meteorites had experienced a significant impact event at that time.

“Events that long ago affected how the Chelyabinsk meteoroid broke up in the atmosphere, influencing the damaging shockwave,” said Jenniskens.

NASA’s Near-Earth Object Program sponsors research to better understand the origin and nature of NEOs. These essential studies are needed to inform our approach to preparing for the potential discovery and deflection of an object on a collision course with the Earth.

NASA's recently announced asteroid initiative includes the first mission to capture and relocate an asteroid, as well as a grand challenge to find and characterize all asteroid threats to human population. It represents an unprecedented technological feat that will lead to new scientific discoveries and technological capabilities that will help protect our home planet.

Aside from representing a potential threat, the study of asteroids and comets represent a valuable opportunity to learn more about the origins of our solar system, the source of water on the Earth, and even the origin of organic molecules that lead to the development of life.

For more information about the Chelyabinsk field study visit: http://cams.seti.org/index-chelyabinsk.html

For more information on asteroids and comets, visit: http://www.nasa.gov/asteroids