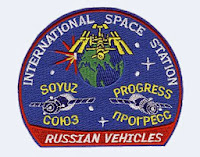 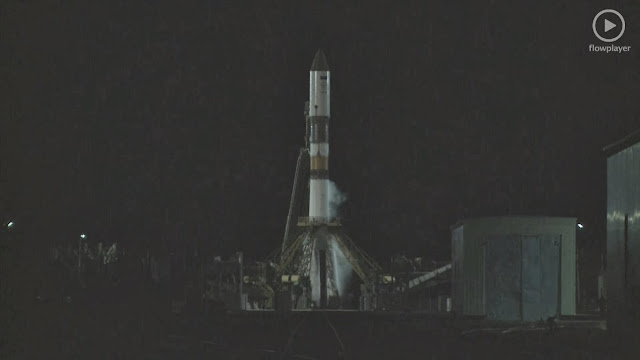 Image above: The ISS Progress 53 resupply ship atop a Soyuz booster awaits liftoff from the Site 31 launch pad at the Baikonur Cosmodrome in Kazakhstan. Image Credit: TsENKI.

A new Russian Progress space freighter loaded with nearly three tons of food, fuel, supplies and holiday gifts for the International Space Station’s Expedition 38 crew launched from the Baikonur Cosmodrome in Kazakhstan at 3:53 p.m. EST Monday (2:53 a.m. Tuesday, Kazakh time).  During its four-day journey to the orbiting complex, the ISS Progress 53 cargo ship will conduct a “flyby” of the station to test an enhanced docking system for future Russian spacecraft.

At the time of launch, the station was flying about 260 miles over southern Russia, near the northeast border with Kazakhstan.

Progress 53, which along with its Soyuz booster was rolled out to Baikonur’s Site 31 launch pad on Saturday,  is delivering  1,763 pounds of propellant, 48 pounds of oxygen, 57 pounds of air, 925 pounds of water and 3,119 pounds of spare parts and experiment hardware to the station.

Once the Progress reached its preliminary orbit nine minutes after launch and deployed its solar arrays, it was set to begin a series of automated engine burns to put it on track to fly within one mile of the station on Wednesday. That close encounter “flyby” Wednesday at 4:53 p.m. will test lighter, more-efficient Kurs automated rendezvous system hardware for upgraded Soyuz and Progress vehicles.  After it finishes its “flyby”, the Progress will loop above and behind the station, returning Friday for a docking to the aft port of the Zvezda service module at 5:28 p.m. 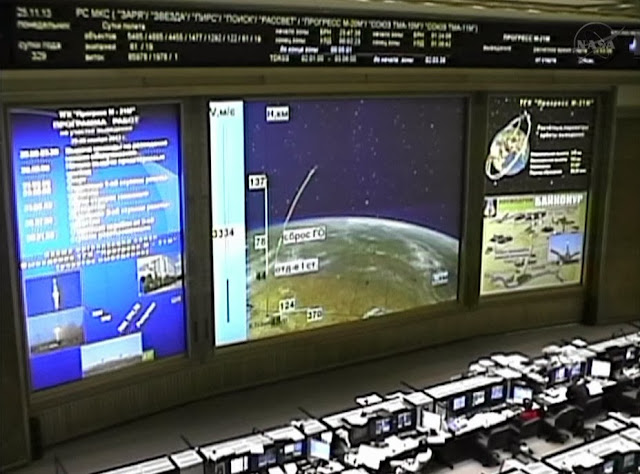 Meanwhile the Expedition 38 crew aboard the station continued their support of station science and maintenance Monday.

Flight Engineer Rick Mastracchio spent most of his morning preparing hardware and test samples inside BioLab, a research facility located in the Columbus laboratory. BioLab is used to perform space biology experiments on microorganisms, cells, tissue cultures, plants and small invertebrates.  Results from experiments performed inside this facility could benefit biomedical research in such areas as immunology, pharmacology, bone demineralization and biotechnology. 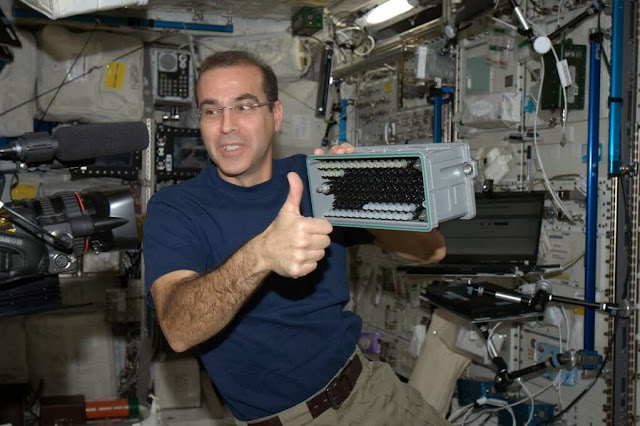 Inside the station’s 7-windowed cupola, Flight Engineer Koichi Wakata set up the Japan Aerospace Exploration Agency’s ultra-high definition camera system to capture detailed imagery and video of Comet ISON as it orbits around the sun. 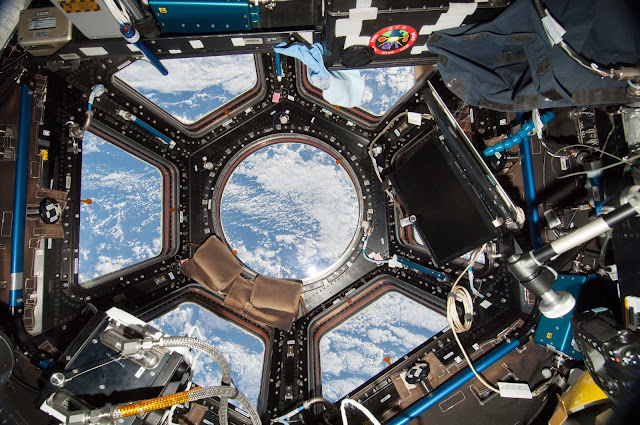 Image above: Equipped with seven windows, the station's cupola probably has exponentially more beneficial facets than it has windows. Image Credit: NASA.

Hopkins rounded out his day installing wire harnesses in the Harmony node to support the installation of Ethernet video cables for the station’s local area network.  These new cables will provide Ethernet connectivity to the visiting vehicles that dock to  Harmony’s Earth-facing port.  The first required use of this capability will take place when the SpaceX-3 commercial cargo ship arrives in February 2014.

On the Russian side of the complex, Commander Oleg Kotov and Flight Engineer Sergey Ryazanskiy conducted the Bar experiment, studying methods and instruments for detecting the location of an air leak from one of the station’s modules.

In advance of the arrival of Progress 53, Flight Engineer Mikhail Tyurin conducted a test of the MPEG2 video stream over the Ku-band system. Tyurin  also performed the Uragan Earth-observation experiment, which seeks to document and predict the development of natural and man-made disasters on Earth.