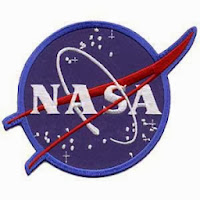 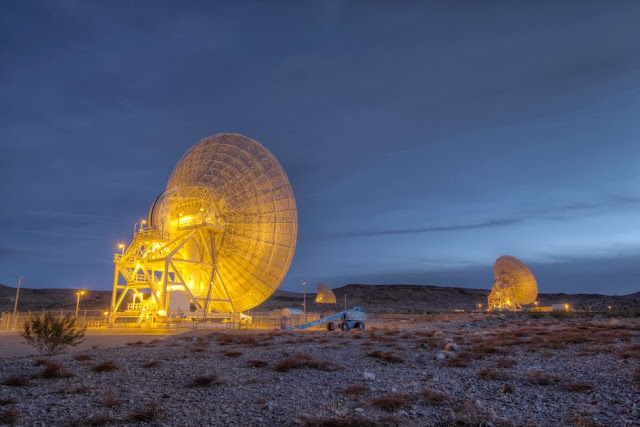 Dawn in the Apollo Valley

NASA's Deep Space Network, the world's largest and most powerful communications system for "talking to" spacecraft, will reach a milestone on Dec. 24: the 50th anniversary of its official creation.

Over the past 50 years, antennas of the Deep Space Network (DSN) have communicated with just about every mission that has gone to the moon or beyond. The historic communiqués include "That's one small step for man. One giant leap for mankind"; numerous encounters with the outer planets of our solar system; images taken by rovers exploring Mars; and the data confirming that NASA's Voyager spacecraft had finally entered interstellar space.

The Deep Space Network has been so critical to so many missions over the decades, the network's team members like to use the phrase "Don't leave Earth without us."

From the very beginning of NASA's space program, it was clear that a simple, direct way to communicate with missions in deep space would be needed. For example, what is the purpose of sending a spacecraft to Mars if we can't receive data, images and other vital information from that spacecraft?

What is now known as the Deep Space Network first existed as just a few small antennas called the Deep Space Instrumentation Facility. The facility was originally operated by the U.S. Army in the 1950s and then later moved over to the jurisdiction of the newly created National Aeronautics and Space Administration (NASA).

On December 24, 1963, the Deep Space Instrumentation Facility officially morphed into the Deep Space Network and quickly became the de facto network for any planned missions into deep space. Three antenna complexes were established around the globe, spread out at roughly 120 degrees of longitude so that even as Earth rotated, spacecraft would always be above the horizon of at least one complex. While some of the communication facilities have moved over the decades, today the three complexes, which operate 24/7/365, are located in Canberra, Australia; Madrid, Spain; and Goldstone, Calif. 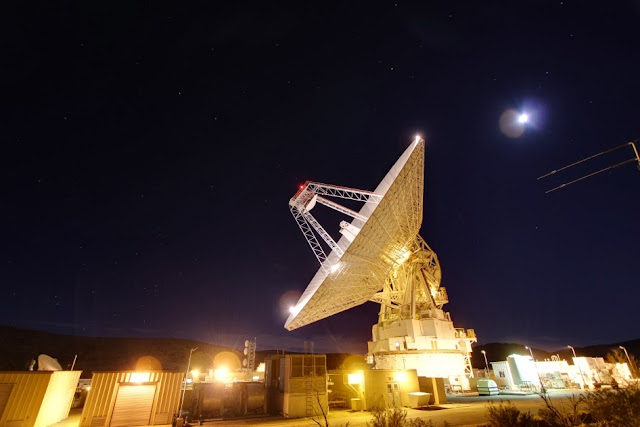 Space agencies in Europe, Japan and Russia have all relied on the Deep Space Network when planning and communicating with their own missions over the decades. The Deep Space Network has been used recently by India's first interplanetary probe, the Mars Orbiter Mission (MOM).

"Today, the DSN supports a fleet of more than 30 U.S. and international robotic space missions," said DSN Project Manager Al Bhanji of NASA's Jet Propulsion Laboratory, Pasadena, Calif., which manages the Deep Space Network.  "Without the DSN, we would never have been able to undertake voyages to Mercury and Venus, visit asteroids and comets, we'd never have seen the stunning images of robots on Mars, or close-up views of the majestic rings of Saturn."

In addition to allowing missions to upload and download data to and from dozens of spacecraft, the network helps navigators pinpoint spots for landings and conduct burns that place spacecraft into orbit around other planets, or fine-tune their trajectory. Currently, the list of spacecraft supported by the DSN includes NASA's Curiosity rover on Mars, the Spitzer Space Telescope, the Saturn explorer Cassini and the two Voyager spacecraft, which are more than 9.6 billion miles (15.5 billion kilometers) away from Earth. 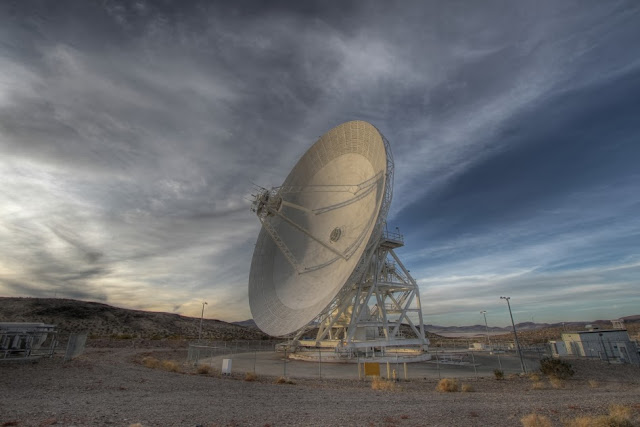 Image above: Goldstone's 111.5-foot (34-meter) Beam Waveguide tracks a spacecraft as it comes into view. This photograph was taken on Jan. 11, 2012. Image Credit: NASA/JPL-Caltech.

The Deep Space Network is also instrumental in carrying out its own science investigations. For instance, the 230-foot (70-meter) antenna at Goldstone is capable of using its radar to "ping" the near-Earth asteroids to determine a highly accurate position and velocity, and scientists are then able to calculate trajectories the asteroids will take over the next 100 years or more. This is crucial for tracking asteroids that could potentially cause damage were they to impact Earth. If the asteroid is close enough, they can also use the radar to “image” the objects to determine its size, shape and rotation.

Additionally, by combining signals from the DSN antennas with other radio telescopes in an appropriate manner, one can create a "synthetic telescope" that's able to peer into the cores of active galaxies halfway across the observable universe. Likewise, the DSN can be used to probe interiors of planets in our own galaxy, study the solar wind and study gravitational physics.

The future of the Deep Space Network looks bright, with optical communications on the horizon to augment the traditional RF-technology (radio waves moving at the speed of light). Optical communications, when operational, will provide a dramatic increase in data return from science missions; the potential bandwidth carried by an optical communications laser beam is far greater than with traditional radio frequencies. In fact, the DSN team envisions the day, not so far off, when, in addition to returning photos of robotic wheel tracks in the dusty surface of Mars, they will be streaming video to a wide-eyed public as the first humans leave their own footprints on its surface.

"In 2063, when we celebrate the Deep Space Network's 100th anniversary, we can imagine that we might be recalling the amazing days when our antennas streamed high-res video as the first humans stepped onto the surface of Mars," said Al Bhanji. "Or that day when we discovered a new living 'Earth' orbiting a distant star."

Of course, no one knows if or when that day might come. But the DSN will likely play a paramount role in breaking the "Earth-shattering" news.

More information about NASA's Space Communications and Navigation program is at: http://www.spacecomm.nasa.gov